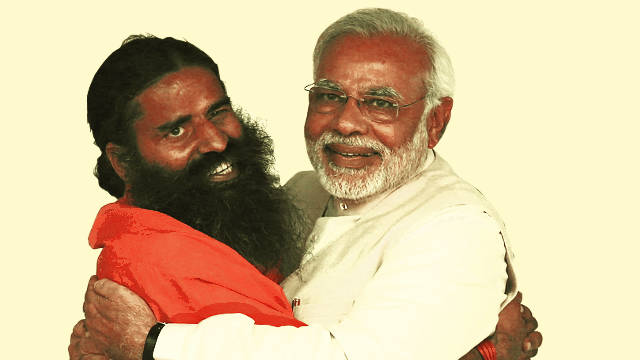 The most popular literary festival of India, the Times Lit Fest will be organised this December in Mumbai, where, along with literary and cultural personalities, RSS’ favourite Yoga-Guru-turned-FMCG-businessman Baba Ramdev is invited as a prominent guest. This decision by India’s largest corporate media conglomerate has taken aback a lot of distinguished writers and literary personalities.

It’s still not clear what’s Baba Ramdev’s contribution to the world of literature, which would make him a star personality to visit the Times Lit Fest as a distinguished guest among others from the literary world. The saffron robe clad businessman, who use the RSS variant of “patriotism” to package his wide range of FMCG products and market them with a nationalist fervour, became a powerful crony capitalist under the present government.

Narendra Modi’s ascension to power in New Delhi has perched Ramdev and the Patanjali brand, owned by him, to the pinnacle of success. The honest citizens are told that the rise of the Patanjali brand under Modi’s rule is just coincidental and then Baba Ramdev appears on television, asserting that the Indians should break the shackles of foreign corporations (overlooking Narendra Modi’s unconditional servility to foreign monopoly and finance capital) and embrace Patanjali products to enhance the growth of “nationalism” in India.

Sometimes Ramdev turns furious and threatens to behead those who don’t sing Vande Mataram, i.e. the song that the Muslims don’t want to sing but the BJP, whose leaders don’t remember the lyrics, insists that the Muslim community sing the song. It means that Ramdev threatens Muslims and then gets away with it, no one lodges a single FIR against him. Ramdev’s unapologetic advocacy for the BJP and closeness to the Modi regime, the Times Group wants us to believe, has nothing to do with the invitation extended to him for the Times Lit Festival.

Even if we ignore the invitation to Ramdev, we cannot absolve the Times group entirely for its complicity in the conspiracy to boost the prospect of Hindutva fascism on intellectual platforms. Along with other corporate-controlled media organisations, The Times Group, which is a large conglomerate of several media outlets, is trying to humanize the Hindutva brigade and is employing its resources to brighten and sharpen the image of the RSS-led fascist camp in India and abroad.

This image management of the Hindutva camp, led by Narendra Modi, is important for the corporate houses of India and abroad, as they want to see Narendra Modi continue as the helmsman for the years to come, and when he becomes politically dysfunctional like Advani, the corporate houses will ensure that Modi is swiftly replaced by Yogi Adityanath. The present hype around Yogi Adityanath is same as it used to be about Narendra Modi in the corporate media, especially the attempts of the savage Hindutva PR agents to build the image of Modi as an uncompromising Hindutva soldier who is committed towards economic development by going to any extent and also a Pakistan basher.

At that period, the BJP had one strongman or “iron man” – Lal Krishna Advani, under whose patronage Narendra Modi grew up and became the strongest contender for the leadership of the Hindutva fascist camp. Today, nurtured and groomed under the patronage of Narendra Modi, Yogi Adityanath is walking through the same path that Modi once traversed.

So naturally, the leader of tomorrow, Yogi Adityanath is a blue-eyed-boy for the big foreign monopoly and finance capital-owned corporations and their Indian subsidiaries. Their love for Yogi Adityanath, which sometimes surpass their love for Modi and the old guards of the RSS, is undying and unwaning for the moment. Therefore, the Times Group, the leading corporate media house, thought to pay its tribute to the Hindutva hate monger and corporate capital appeaser, Yogi Adityanath, by publishing a book on him.

Pravin Kumar’s book, Yogi Adityanath: A Saffron Socialist, is published by the Times Group as a token of gratitude to the Hindutva camp, which provides its investors and advertisers good business deals and scope to plunder the natural and mineral resources of India for free. While marketing the book, Times of India started an intense Islamophobic campaign using Yogi Adityanath’s visit to Azamgarh years ago, when his major role in Uttar Pradesh politics was to incite riots and polarise the majority Hindu community on behalf of the BJP.

By portraying an utmost fascist, communal hate monger and rioter as a socialist, the Times Group is playing the same cards that the German media, owned by big capitalists, did in the 1920s, when they started projecting Hitler as a Nationalist Socialist, to hoodwink the working class and the poor Germans, who were fed-up with the capitalist system and its exploitative framework and were looking East towards the Soviet Union for inspiration. It’s the same reason that the corporate media wants to project Narendra Modi and the BJP as an anti-establishment and populist political force while hiding their absolute loyalty to the repressive establishment and their stooping in front of the big corporations, foreign and domestic.

This notorious political gameplan of the Times Group, even after its projection of a liberal face by inviting few “liberals” and official dissenters to speak at the venue of its self-certified “prestigious literary show”, which is funded by big foreign monopoly and finance capital, shows that the media giant is all set to strengthen the saffron camp intellectually and provide it support by painting a favourable image.

Participation in literary fests like the Times Lit Fest is actually a religious practice for the majority of authors, film personalities, poets and various other intellectuals who try to sell their services to the highest bidders and some of the liberal figures try to show their dissident nature to bargain strongly with the corporate giants, who buy their intellect and loyalty, explicitly and implicitly.

To uphold the banner of freedom, secularism and democracy, the real progressive and democratic intellectuals must boycott the reactionary platforms like Times Lit Fest, which serves the interest of foreign and domestic corporations and works as a linkage between intellectuals and such corporations that want to buy their service. Rather, the progressive and democratic authors, poets, artists, filmmakers and other intellectuals must integrate with the broad masses of the working class and the peasants who are struggling against the fascist reign of Narendra Modi and his coterie of Hindutva hate mongers.

Only by uniting with the broad masses of workers and peasants, the intellectuals can contribute in building a better India by smashing the fascist conspiracies and the hegemony of the Hindutva fanatics. The need of India is a socialist and progressive society and not any religious fanatic riot-monger who will be packaged as “saffron socialist” by the unapologetic advocates of neo-liberal economy, and therefore, it’s time to build up people’s lit fest, where anti-fascist literature and intellectual works can survive and thrive by countering the mainstream fascist narrative. Against the likes of Times Group, the democratic and progressive intellectuals must build up such a strong people’s movement.