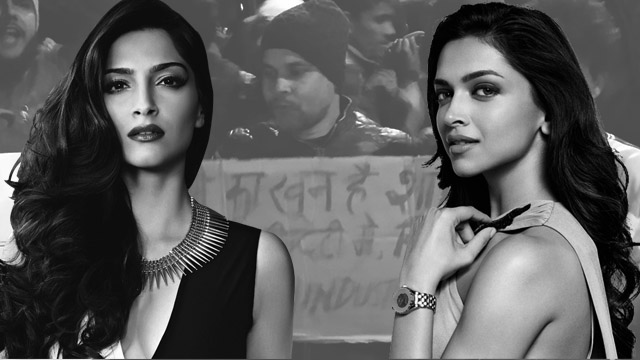 We are seeing today the majority of Indians are talking about peaceable movements. From the gathering of Shaheen Bagh, Delhi, Lucknow’s Clock Tower to Kolkata’s Park Circus, the theme is similar everywhere. Interestingly, peace doesn’t come opposite to war unfurled by the state but it comes with the life we all strive for. The life that was fought for the dignity of political prisoners in Lahore Jail by the revolutionary Jatin Das against British imperialist occupation of India or The Third of May 1808, a painting by Francisco Goya holding a protagonist in brightened white shirt in front of Napoleon’s armed force in Peninsular War. On 7 January 2020, Deepika Padukone, a female Hindi film actor, visited the protesting students of Jawaharlal Nehru University (JNU) after they suffered a heinous attack by ABVP goons. Though she congratulated the JNUSU President Aishe Ghosh, Padukone refrained from uttering a single word in solidarity with the students’ movement against fee hike or against the Hindutva fascists.

Post her visit, the mainstream parliamentary left opportunists, along with a whole bunch of social democrats, celebrated the act and glorified it like Ho-Chi Minh’s visit to the Republic of India. The social media was on the storm; even the so-called sensible people too started an immediate comparative study between Islamophobic Amitabh Bachchan and the newborn ‘secular sympathiser’ who came there for a film promotional stunt.

The history of popular Hindi cinema has always been the bitter portrayal of a defender or advocating a Muslim character, loyal to the tri-colour thus patriotism. Mostly Muslim actors are forced to play such roles. Long back, the silver screen was consumed by rich men to represent Muslims as heinous and secessionists, always demanding a separate state thus rupturing the sovereignty of a ‘super secular’ India. Muslims are only allowed to play a good cop when married to a pious, devout Hindu woman with enforced vermillion on the forehead.

If we remember Amir Khan starred Sarfarosh or Sunny Deol starred Gadar, our previous argument might match somewhere. Coming backstage, the manufacturers of the Hindi cinema industry, most of the technicians, workers are Muslims. This Hindi film industry is undoubtedly a satisfactory copy of American Hollywood, where a Muslim character ‘was’ started with exoticism, then a noble savage, later a marginalised entity and finally arrived at the demonisation to satisfy the Indian communal conscience shaped and formed by the global ruling class.

Since the Indian doors were opened to the US, the Hindi film industry of Mumbai started de-humanising the average ‘Muslim man’ through box-office hits like Gadar, Fanaa, Border or Sarfaarosh. All these patronised Islamophobia in Hindutva minds to portray the narrative that India only belongs to hyper-masculine Hindu men who are born with the right to falsely jail Muslim men to keep the control over a ‘hyper secular land’. The portrayal of women was always bargained by the patriarchal masters or the master producers, the stooges of the likes of Mukesh or Anil Ambani, Gautam Adani or Ratan Tata.

Since the parliamentary opportunist left were busy salivating their own secure zones they had to ally with state forces, open or secretly. Though they often gave the call for ‘candle-lit’ or peaceful marches against lynchings of poor Muslims, they officially ignored the imperialist manifestation of Islamophobia. The progressive left has been the sole force combatting the heinous opportunism of parliamentarians, the mediocre demand for peace and the deeply-entrenched Islamophobia. The progressive lefts are the sole force that could connect Muslim-Hindu discourse inside and out of the factory, in parameters of class-war, convulsing economy and finally a fight for dignity.

The parliamentarians, along with mainstream Muslim organisations and NGOs, naturally refused to listen to the truth or acting on it to not hamper their source of funding. Hence, they kept on branding the progressive lefts by adopting the act of fear-mongering, acclimatised by the state machinery. This obedience towards the funding institutions, the extreme rich, gave rise to set primacy of peaceful sit-ins. This stalemate situation of protests gave birth to the act of accommodating the anti-people force.

A few days back, P Chidambaram came to Park Circus, Kolkata. Chidambaram, the former home minister, who once said that “Maoists are the craftiest capitalists in the country”, was later arrested in a case of fraud and irregularities of Rs 3.07 billion in the FIPB clearance. The INX Media scam was bared open in front of ‘peaceful nationalists’ by the plot of hyper ones. Chidambaram, a pimp to the ruling classes, told a decade ago “Maoists should be trampled like ants under feet”. Under his leadership, 500,000 paramilitary soldiers were sent to kill the tribals resisting the corporate aggression on their water, forests and land.

Returning to the Hindi film industry, in one of his famous films, Shahrukh Khan had to say “my name is Khan and I am not a terrorist” in front of the US President. It was an act of confession and submission to the comprador rulers, which was thoroughly enjoyed by the Indian crowd. Remember Oscar-winning The Hurt Locker where Muslims were portrayed either as demons or preys? Lest we forget, in January 2011, the New York Police Department endorsed and showed an anti-Islam documentary The Third Jihad to psychologically train police officers in a war situation. And this film was funded by none other than Clarion from Israel. The same Israeli ‘non-profit’ organisation that funded ‘Radical Islam’s war against the West’ during the election of 2005.

Today, starting from Sonam Kapoor to Padukone, all are expressing their gooky ‘solidarity’ with JNU, Aligarh Muslim University or Jamia Millia Islamia students we need to have a quick visit on their recent past. The same Kapoor and Padukone who wide opened their mouth while selfying with Prime Minister Narendra Modi a few days ago, have their own murky trails uncovered.  Kapoor recently acted in a film called Shikara on the Kashmiri Pandits’ exodus, which demonised Kashmiri Muslims. Interestingly, on 19 January, artists publicised ‘in solidarity with Kashmiri Pandits’ in Shaheen Bagh, when almost since the past six months, the Kashmir valley has been under a brutal siege.

These narratives of Chidambaram, Kashmiri Pandits’ plight or former Delhi Lieutenant General Najeeb Jung’s ‘disillusion’ are the new ones that the Indian state needs to resort upon to stop revolutionising the protests. Since Hollywood sustained on the Islamophobic and communist eradication content on the silver screen, to add on to IMF and World Bank’s plot of ‘a world without Communists’ and ‘radical Muslims’, they very well nursed the social democrats, institutional intellectuals and general people’s mind through extensive publicity medium.

Padukone, who always ensures Modi’s presence in her own festivals, took refuge to hyper-masculinity in Padmavat to satisfy the audience, high on ‘nationalist libido’. In this film, Amir Khusrau — the pillar of Persian literature — was reduced to a court entertainer, a yes-man to Alauddin Khilji. Brahminical, Islamophobic director Sanjay Leela Bhansali portrays Khilji as a criminal, who is thirsty of war. Each time Khilji appears with a green flag with a star and a crescent on it as a celebration of an ‘ever enemy land’ to secular, masculine India. Each time Khilji kills his enemies, the verses of Al Qur’an are recited to optimise Indian-Hindu minds. Finally, the name is changed from Padmavati to Padmavat to glorify self-immolation under the patriarchal shades of religion.

Apart from films, the global imperialist machinery is so bitterly scared of bearded brutes that since 9/11 George W Bush’s ‘you are either with us or against us’ became the metaphor of a new map of organised torture and bombing Muslim countries rich with minerals and oil. ‘Terrorise them with manufactured terrorists and loot what all they have’ became the hidden agenda to the American looters. Initially, the Hollywood portrayed Vietnamese or Cuban as monsters, Russians as communist devils. As the Cold War ended and the USSR collapsed, communist villains were replaced by Muslims. The Kuwait war provided it. It is in a rumour that the image of handsome Muslim men packed in the cartridge was planned in some underground CIA chamber. America, successfully shaped public opinion globally while asserting a blanket hatred against everything that is Islamic. This hatred became like faith to majority Indians which needed to be challenged decades back. Yet this is a fearless time when people have come on the streets to demonstrate against the world imperialism’s extreme game, like National Register of Citizens and the Citizenship (Amendment) Act, 2019, but these protests without the vanguard force are simply going nowhere as the process of revolutionising them is getting challenged. It’s a time to learn from enemies, study them closely where we all will get to know that the Rashtriya Swayamsevak Sangh has been building up an organisation in the rural areas, hence, they are now capable to cordon the cities with the radicalised rural poor. And parliamentary left opportunism’s masturbation is built on the comfort narratives of city space. This account can only be fought by the peasants, workers and students’ radical alliance to raise the mercury of organised political protest against their ‘peaceful ones’.  As VI Lenin said, the alliance as ‘the apple of our eye’ our hearts should beat to the act, even if there is a strategic retreat for a moment.