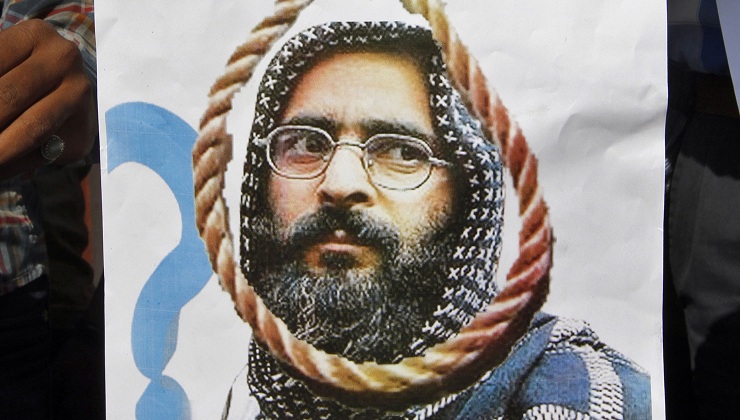 The spectre of the slain Kashmiri Afzal Guru is haunting the Indian ruling classes and their devotees very badly. The man whom the government hanged after a flawed trial to “appease the collective sentiment of the majority” is speaking from his grave, and his words are peeling off the cosmetic cover on the grotesque face of the draconian state.

Afzal Guru was hanged in 2013 in Tihar Jail after being implicated in the 2001 December parliament attack case. Guru, who hailed from Baramulla, was implicated in the case as the police had no clue to resolve the case and resorted to its old tactic of “blame it on them” to close the case. Despite the fact that the entire prosecution was flawed, Guru’s confession was extracted and infamous TV interview was done using extreme torture; the Brahminical fascist Hindutva state and its organs carried out the institutional murder.

The BJP and its parent body RSS strongly supported the institutional murder of Afzal Guru, and opposed everyone who voiced concern over this arbitrary institutional murder committed by the Congress Party led UPA II government during the last days of its tenure. However, the BJP or the RSS had no reservations to ally with the People’s Democratic Party that opposed the hanging of Guru, to form a government in Jammu and Kashmir. This exhibits the sheer hypocrisy of the saffron outfits and the hollowness of their over-rated “nationalism”.

Following the standpoint of the RSS regime, Facebook deleted the cartoon published by Mir Suhail Qadiri, a Kashmiri cartoonist who drew the cartoon that depicted a root growing from the grave of Afzal Guru in Tihar Jail joining the roots of the Kashmir struggle. The cartoon was published by Rising Kashmir. When Qadri re-posted the cartoon in his Facebook page, it was deleted by Facebook administration upon complaints received from the Hindutva brigade. Qadri told the Hindustan Times – “The incident shows how fragile the freedom of expression is in India” – while commenting on the deletion of his cartoon.

ABVP, the RSS student’s wing, flocked by the upper caste Hindu males mostly hailing from feudal landlord families, created a ruckus in the JNU campus on Wednesday, 9th February, when the Democratic Students Union members wanted to organise a programme to show the mockery of democracy and fair judgement that led to the institutional murder of Afzal Guru, while the perpetrators of the terror attack on the parliament are roaming scot-free.

The DSU was earlier given permission by the JNU VC to organise the cultural programme on the judicial killing of Afzal Guru and Maqbool Bhatt in solidarity with the struggle of Kashmiri people for their democratic right to self determination, organised at Sabarmati dhaba on the campus. However, soon after the ABVP found out the news of the event they resorted to hooliganism using forces brought from outside along with the students hailing from upper caste Hindu landowning feudal families. Incidentally the only ABVP member in the JNU Students Union is a upper caste Brahmin, Saurabh Sharma, who, inspired by his University of Hyderabad counterparts – whose actions killed Dalit student leader Rohith Vemula, led the agitation to buy some media space and relevance in the campus, where the saffron unit is in a pitiable state.

Following the course of action of the UoH ABVP, Saurabh Sharma along with other upper caste Hindu students from feudal background organised a mob to threaten the organisers and force them to call off the programme. The VC, M Jagdeesh Kumar, complied with the ABVP agenda and revoked the permission given earlier to the students to organise the cultural programme that aimed to provide a critical insight into the fascist policies of the Indian state. The ABVP of JNU, again replicating the strategy of the UoH, is approaching their patron, the Union HRD Minister, Smriti Irani, and asking her to take action against the 10 students that the ABVP has accused of carrying out “anti-national” activities in the campus. The ABVP wants their rustication, which is more likely to be done by the JNU administration on behest of the RSS.

In case the university administration adopts repressive measures against the students who organised the programme that critically analysed the fascist menace looming large on the people of the country in general and Kashmir in particular, then of course it will be a temporary victory of the ABVP in implementing its fascist diktat in the campus; however, on a long run it will fuel a massive student uprising all over the country against the fascist RSS student’s body and its Brahminical fascist hegemony. The fire that caught the campuses since the institutional murder of Rohith Vemula has not extinguished yet, the fuel of the JNU students will indeed increase its intensity. That will be another, if not the last one, in the coffin of the Hindutva brigade operating across the campuses of the country.