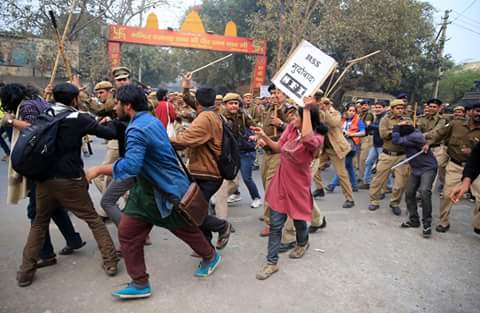 The Delhi Police along with the fascist thugs of the RSS unleashed a barbaric attack on agitating students heading towards the RSS office in New Delhi’s Jhandewallan area on Saturday 30th January 2016. This barbaric assault on a peaceful democratic rally once again manifested the utmost fascist character of the RSS – BJP government. Delhi Police is controlled by the Union Home Ministry, which has RSS member Rajnath Singh at its helm.

The rally was organised by different student organisations who were protesting against the administrative role of the BJP led Union Government in abetting the suicide of Rohith Vemula, a research scholar of University of Hyderabad who became a victim of caste apartheid due to his Dalit origin.

Similar rallies are organised all over the country by student organisations and a nationwide mass movement has started against the Brahminical fascist system, which RSS is trying to impose on the nation using the Modi led Central Government as its tool. The protestors are demanding the immediate sacking of Union HRD Minister Smriti Irani and Union Labour Minister Bandaru Dattatreya for their active role in having Rohith Vemula and his other Dalit comrades punished due to their resistance struggle against fascist ABVP in the campus of UoH.

When the students reached near the Jhandewallan based RSS office, the Delhi Police started an unprovoked attack on the peaceful rally, hitting men and women alike and the Delhi Police were joined by the RSS men, who too participated in beating the students with sticks and clubs. The women were brutally beaten by policemen and RSS thugs, who threw women across the road after thrashing them badly.

The press was attacked as well, cameramen recording or shooting snaps of the state sponsored violence were thrashed by the RSS activists and Police. A cameraman kept on pleading with the police unsuccessfully to save his  camera, which was smashed into pieces by the Delhi Police keen to show their loyalty to their khaki knickers clad masters.

The Delhi Police later washed off its hand from the incident as the DCP (Central) denied any police violence on protestors, even when the entire social media was flooded with pictures and video clips of the assault. The police has even acted as an advocate of the RSS and claimed that no RSS men were involved in the violent baton charge against the students at Jhandewallan.

Since the ascension of Narendra Modi to the throne of Delhi along with the victory of the BJP in other states of the country, the democratic protests and agitations of different sections of the society, including the student movements, has become subject of brutal state suppression. In the last few months the security forces controlled by the BJP has unleashed violence on agitating students in different parts of the country on multiple occasions. The Maharashtra police launched a violent assault on the agitation of FTII students against the appointment of Gajendra Chauhan to the post of director; the Delhi Police has resorted to baton charge on agitating students protesting against the cancellation of non NET scholarship by the UGC, paramilitary forces were deployed at Delhi University to keep students protesting against Ram Temple seminar hosted by the fascist hate monger Subramaniam Swamy, Delhi Police used violence to curb the demonstrations against the Union HRD Minister Smriti Irani after the death of Rohith Vemula.

As soon as the bubble of “better days” busted and the so-called Modi wave started fading away, the BJP and its parent body, RSS, started manifesting extreme frustration and resorted to violence to show the fascism embedded in its DNA since inception. The Modi regime through its naked corporate appeasement policies and anti-people measures insurrected the massive anti incumbency wave within two years, which the Manmohan Singh led Congress government faced during its seventh year onwards.

The growing unpopularity of brand Modi and RSS saffronisation agenda has contributed rapidly to the massive electoral misfortune of the Hindutva brigade in the recent times. This frustration has manifested itself in repeated attempts to fuel communal polarisation, creating a panic environment by magnifying terror threats, using online and offline trolls to silence critiques and lastly resorting to violence in order to curb the genuine democratic mass movements.

It is a well known fact that the security forces of the country runs on colonial pattern and are anti-people fascist organisations of the ruling classes. The Delhi Police, built by the British imperialism to suppress genuine mass uprisings against its colonial rule, is infamous for its upper caste outlook, misogynist approach and utmost human right violations. Unable to stand any criticism or democratic protests against the government, this corrupt force has resorted to the most barbaric repression of democratic struggles in the past and present as well.

The Delhi Police, with absolutely negligible number of Muslim, Dalit and Tribal employees, is a fiefdom of upper caste Jatts, Pundits and Kshatriyas of Haryana and Western Uttar Pradesh. This caste composition along with the origin of its entire work force from feudal background explains the reason of its misogynist, casteist and communal outlook and activities.

The Delhi Police has always collaborated shamelessly with the ruling classes to suppress the just struggle of the people, the progressive mass movements and has always acted with a vendetta against Muslims, Dalits, Tribals and non Hindi speaking people of Delhi. A trigger happy force, the Delhi Police had earned its trophies by killing innocents, whom they have arrested on fabricated charges.

It is the first instance where the Delhi Police openly joined hands with a saffron terror organisation like the RSS to launch a violent aggression on students. This brutal crackdown of the peaceful students rally has raised a storm of outrage against the Delhi Police and its command centre, the Union Home Ministry. Though the RSS has denied any involvement in the attacks, it was evident from the video footage that their men were actively participating in the violent crackdown. The RSS and right wing Hindu extremist forces once vehemently criticised the brutal assault of the Delhi Police against the sit in demonstration of the self-styled Yoga guru Ramdev, a staunch RSS ally, during the UPA II regime. The same RSS stalwarts are now defending the notorious police force, which is acting under their command.

The students of different universities of Delhi has planned to stage a bigger demonstration outside the Delhi Police headquarters located in ITO junction of the capital city on 2nd February to protest against the fascist onslaught of the state machinery against peaceful democratic movement of the students.

The massive outrage growing against the brutal regime that launches violent assaults on unarmed students will now threaten the government to either bow before the people or will widen its exit door by intensifying strong democratic resistance struggle against the autocratic regime led by a megalomaniac Prime Minister and his coterie of cult worshippers.