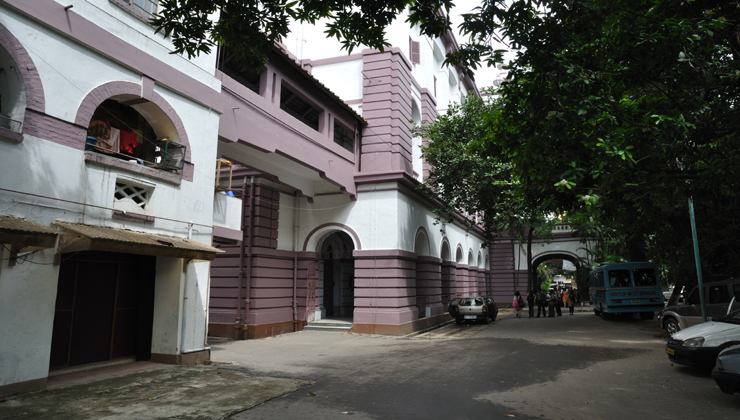 The students of Presidency Deemed University of Kolkata staged a massive protest under the left wing student organisations like the SFI and the Independent Consolidation against the maiden visit of the Chief Minister Mamata Banerjee to the campus. The students protested against the autocratic rule of the VC, Anuradha Lohia, who is working as a docile tool of the state government and diminishing the status of the prestigious college turned deemed university in the country.

Anuradha Lohia has long overlooked the demands of the student organisations, particularly from the left regarding revamping of the existing infrastructure of the university, from where significant number of professors and researchers are leaving due to lack of proper infrastructure and environment for excelling their research or academic endeavour.

Despite being a deemed university, there remains no autonomy of functioning, and the state government calls the final shot in each and every decisions made by Lohia and her team of management. The arrogant nature of the VC, Lohia, has reached the level of that exhibited by ousted Jadavpur VC, Abhijit Chakraborty, who never hesitated to show his servility to the ruling clique led by Mamata Banerjee.

The students also protested against the Trinamool Congress government’s atrocities against the student community and its struggles, which saw a student leader of SFI, Sudipta Gupta, being killed by the police in the streets of Kolkata on 2nd April 2013. The same year, on April 10, a procession led by Trinamool Congress supporters barged onto the premises of the university and ransacked their laboratory.

After trying her dramatic acts to show that she is overlooking the protests, the Chief Minister forced the police to create a breach in the barrier erected by the protesting students, which challenged the unconditional authority her personality likes to enjoy. The students were unmoved by the assault of the police force and continued to wave the black banners. After hearing the news of the protests, the Trinamool controlled Trinamool Chhatra Parishad, a body of organised hooligans in the education field masqueraded as students, organised rampage across the College Street area of Kolkata to manifest its frustration. During the Trinamool Chhatra Parishad’s rampage on the street, which was mainly an act of muscle flexing by the ruffian elements the students of the vicinity were threatened with dire consequences and women were allegedly molested.

The Trinamool Congress, which lacks any remarkable presence in academic institutions of excellence like Presidency Deemed University, Jadavpur University, etc. always adopts a violent attitude while dealing with the intellectually advanced and progressive students of these institutes. The Trinamool Congress and its student wing lack any significant intellectual presence due the mediocre ideological orientation and an autocratic organisational style that it adapts. In the intellectual landscape of Bengal, the ruling party only governs the loyalty of the commercial film actors and actresses, who give in to the pressure of the former due to the monopoly of Trinamool supporter producer-director cartel that does not allows anyone opposing the Trinamool government or its supremo any employment in the mainstream entertainment industry.

The protest of the students of Presidency was portrayed in the darkest colour by the corporate controlled media, especially the Ananda Bazar group, which owns Ananda Bazar Patrika and ABP news conglomerate. These media outfits, serving the interest of the neo liberal economic forces, called the protest of the students as an act of anarchy and blamed the students for ‘indecency’ and chaos. They conspicuously kept silent about the hooliganism of the Trinamool Chhatra Parishad goons in the same area, and blamed the left wing students.

This sudden shift of the ABP group’s policy, which had been a low key critic of the government led by Trinamool due to the government’s sluggish implementation of neo-liberal policies, is a remarkable thing. The ABP group on the other hand highlighted the plight of the Jadavpur students during the latter’s campaign against the VC Abhijit Chakraborty’s autocratic rule.

The reason for such a shift of the blame can be found in the growing bonhomie between the Trinamool Congress and the BJP through the backdoor channels. The ABP group, that supports the pro-corporate Modi government through arduously writing and propagating news and articles in favour of pro market – neo liberal policies of the government, is supporting the back door diplomacy between the Trinamool and the BJP. An example of the newly found bonhomie was seen when the Trinamool Member of Parliaments led by Derek O’Brien cancelled their trip to Pune to meet and support the agitation of the FTII students. The protests staged by the left wing students directly striked their interests, and they plunged into the ring to blame the left students for ‘brewing trouble’ and ‘indecency’.

It is amazing to see that the students of Presidency, which has produced lot of talents in the country, with disdain for the media coverage, continued their struggle against the VC with more vivacity, and that continues to raise the hypertension for the state administration ruled by Trinamool Congress, that only understands submission and cannot stand opposition at any level.

The new revival of left wing student movement in West Bengal is a ray of hope for the province which has only experienced unilateral atrocities and repression by the ruling party since the Mamata led Trinamool Congress formed government in Kolkata four years back.