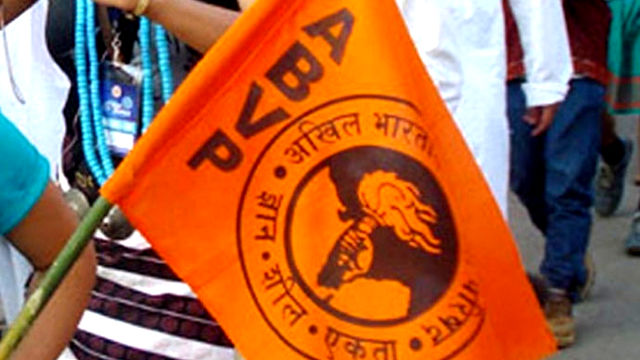 A massive clash broke between the students of Delhi University (DU) and the ABVP goons, who were paid by the RSS head office in Central Delhi to carry out a violent assault, including sexual abuse of women, at DU Wednesday afternoon. The students and teachers of Delhi University’s North Campus were protesting against the violence unleashed by the RSS’ goons on Tuesday, 21st February when Umar Khalid and Shehla Rashid, two student activists of Jawaharlal Nehru University (JNU) came to attend a seminar in Ramjas College.

The teachers and students of Delhi University were scheduled to march to the Maurice Nagar Police Station to lodge a complaint against the ABVP goons , who are on the payroll of local RSS and BJP leaders of Delhi, for their ruckus during Tuesday’s event. The ABVP goons launched a series of attack against the protesting students with full support of the Delhi Police, which just didn’t remain mute spectator during the violent attack by the ABVP goons on the students and teachers, but pro-actively supported it following the pattern of the Patiala Court attack on Kanhaiya Kumar last year.

RSS volunteer Home Minister Rajnath Singh and his deputy Kieren Rijjiju has ensured in 2014 that the entire Delhi Police machinery officially subscribes to its version of Brahminical fascist doctrine and assist all affiliates of the RSS and BJP in their criminal activities in and around the capital city. The ABVP goons got extensive support from the Delhi Police since the time the Vajpayee government ascended to power in the late 1990s. Despite the change of guard in the Home Ministry during the Congress-led UPA era, there was no change in the attitude of the pro-Hindutva state machinery towards the ABVP goons, who are mostly the paid saffron agents and most leaders of the ABVP belongs to the upper-caste feudal and trader families.

The recent spurt of violence in the campuses of the country under the leadership of the ABVP goons is happening due to the extensive funding provided by big corporations owned by Tata, Adani, Ambani, etc. to the RSS and the BJP to ensure a nation-wide dissent-free campus and turn higher education into commodity by following the new diktat of the WTO. The RSS is in the process of turning the British colonial education system prevalent in India into a more regressive and orthodox system, which will inculcate obedience to the ruling party and leader, among other things, in the students and will manufacture obedient and blind-followers of the corporate sponsored Hindutva fascism. The ABVP and its goons work extensively to make this mission successful.

The ABVP goons are attacking students and youth everywhere in the country; the campuses of Allahabad University, University of Hyderabad, Jadavpur University, FTII, IITs, JNU, etc. are witness to the most violent attacks by these RSS agents. The ABVP goons attacked journalists, teachers, academicians, and student leaders, whoever has critical outlook and challenges the intellectual paralysis and mediocrity of the RSS at these campuses. Though ABVP adheres to the RSS’ reactionary patriarchal system, still it managed to rope in a large number of upper-caste elite women into the ranks of its thugs and let loose that feral mob on women activists at different occasion, including the recent attack on the Delhi University teachers by the ABVP in North Campus on 21st and 22nd February.

Earlier these ABVP goons carried out violent attacks on Prof. Dr. G.N. Saibaba for his vocal opposition to Operation Green Hunt, the war of the mining corporations against the poor tribal people of India; they attacked senior journalists like Siddharth Varadarajan for his critical remarks against the Modi government, and they are threatening to physically assault every forces that dare to oppose the fascist policies of the Sangh Parivar and its Hindutva agenda.

Due to lack of large-scale student movements in the campuses and the lacklustre and cowardice attitude of the anti-saffron camp in the university campuses, the ABVP goons get their moral booster to launch one after another attack without worrying about any repercussion. As the ABVP goons and the NSUI use lot of money, muscle power, and alcohol to win campus elections in Delhi University since years, their lumpen acts doesn’t make much difference to their poll fortune. At present, the ABVP receives the highest amount of money and state support to carry out its criminal activities. The extensive support they receive from the Modi government’s Home Ministry and other ministers makes them the most fierce stormtrooper of the Hindutva fascist brigade.

Through the Hindutva lackey media houses like Zee News and the toady journalists of the RSS and BJP, the ABVP is trying to build up an image of a lone crusader against the RSS’ perceived “anti-national” forces, the whole country, especially the working people and the oppressed castes, nationalities, and tribal people are able to see the real grotesque face of the saffron fascists through the activities of the ABVP goons. Also the sheer hypocrisy of the ABVP goons and the RSS was exposed when both remained mum on the incident of the Madhya Pradesh ATS busting an espionage racket of the Pakistani secret-service agency ISI, which resulted into the arrest of 11 people, including people like Dhruv Saxena, who was BJP’s IT Cell Member and a Bajrang Dal activist. Others among those arrested for their alleged link with the ISI also have close ties with the Bajrang Dal and its cow vigilante and anti-lover squads.

The nationwide anti-incumbency wave against the Modi government is getting stronger every day and the frustration rising in the RSS led Hindutva camp due to its failure in containing the mass discontent is manifested through the actions of the ABVP goons and other Hindutva fascist organisations. Despite their intense campaigning using toady journalists and pro-Hindutva media outfits like Zee News, the RSS led Hindutva camp is drastically failing to synchronise the mass opinion in favour of the Modi government. The reflection of  the same can be seen in the campuses, where the elite, priviledged, and upper-caste students are the lone supporters of the Modi government and the ABVP thugs have no standing among the students from the economically and socially oppressed students. This frustration is also fuelling the RSS’ tempo and in a desperate bid to hold on its support base among the upper-caste elite and upper-middle class students in the campuses, the Hindutva fascist organisation is resorting to utmost violence and intimidation by using the ABVP goons.

The utmost lack of a formidable force that will resist the assault of the ABVP goons and other Hindutva fascist organisations is helping the ailing saffron brigade, which is still able to sail through the rough waters. Unless the Indian political arena experience a large-scale unity and rise of an anti-Hindutva front that will include all democratic and progressive forces and will pro-actively resist the assaults by the Hindutva camp at every inch of the political battleground, there cannot be a reversal of the current trend of fascist assaults carried out by the forces like the ABVP goons. Until the masses are mobilised for a pro-active nationwide anti-Hindutva fascism resistance movement, democracy and democratic environment will remain aloof from the common people.