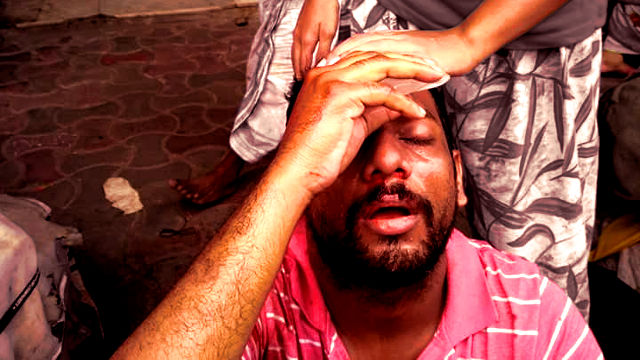 The Trinamool Congress is accused of helping the BJP to grow in West Bengal, a state that remained aloof from communal politics until 2014, by providing it with the opposition space, which the ruling party and its cadres swearing allegiance to Chief Minister Mamata Banerjee have proved to be correct on multiple occasions. A recent attack by the goons of Trinamool Chhatra Parishad (TMCP), the TMC’s student organisation, on left-wing student activists distributing leaflets that criticise the Narendra Modi-led Hindutva fascist regime’s conspiracy to privatise higher education and dissolving the UGC, proves that the ruler of West Bengal, despite her cosmetic protests and rhetoric against the Modi regime, supports New Delhi ardently and shares a common goal of liquidating genuine revolutionary left resistance, which both TMC and the BJP loath.

Student activists Mainak Maity, Jayshree Pal, Ritam Das, Bandana, etc. came under attack outside Surendranath College at Kolkata’s Sealdah area when they were distributing leaflets on a 31 August convention against privatisation of education by the Modi regime through HECI/HEFA. The goons of TMCP thrashed them in public and tore the leaflets that vehemently criticised the education (or the lack of it) policy of the Modi regime. The attackers wore their political allegiance on their sleeves and used their clout on the police and the local people to commit such a crime in broad daylight with utmost impunity. The Kolkata Police remained mute spectators when student activists were thrashed on a busy road by the ruling party goons. The TMCP men threatened the activists with dire consequences should they dare to carry out any political work that offends them, including criticising the Modi regime and its heinous conspiracy to prevent the poor and the socially marginalised sections from availing higher education.

A few months ago, when the college admission process started in West Bengal, the TMCP established a reign of terror and established its control on admission mechanism. The organisation sold seats in almost all colleges of the state in lieu of huge amount of bribes. Their corruption and hooliganism reached such a peak that Mamata Banerjee had to intervene and dismiss the head of the organisation to curb opposition criticism. The RSS’ student organisation, the ABVP, also managed to carve a space for its own brand of hooliganism in the state following the decay of the SFI, the student organisation of the CPI(M) that once dominated the space where TMCP has established its fiefdom. The TMCP and the ABVP engaged in fewer brawls but unitedly attacked the student organisations and activists of the radical and revolutionary left. In each college and university of the state, they took turns, according to their respective organisational strength, to attack the progressive and democratic students following the diktats of their leaders.

This is one of the reasons that whenever the progressive and democratic students of the left organised any political campaign against the RSS or the BJP, especially against their communal polarisation or mob lynchings, the TMCP didn’t support such moves but used its muscle power to help the saffron camp thwart the students’ offensive. Many of the TMCP goons, especially those from the upper-caste families of West Bengal, are also closely associated with Hindutva fascist organisations like Hindu Samhati, Bajrang Dal and Vishwa Hindu Parishad. Under the guise of religious practice, these goons help the saffron camp to polarise people on communal lines by spreading vicious propaganda against the Muslim community. Their exemplary ability to wear different hues like chameleon allows them to rule the campus space with an iron fist.

Even after the barbaric attack on them, the left-wing students didn’t give up their endeavour. They gathered a large number of supporters and blocked the Amherst Street near Sealdah and Bow Bazar Street (B.B. Ganguly Street), demanding the immediate arrest of the TMCP goons. The militant fervour and fearless retaliation by the students forced the TMCP goons and their coward leaders to flee from the area and compelled the police (Muchipara Police Station) to promise (vaguely though) immediate action against the culprits. The student activists pledged to carry out an intense movement against the violence against their comrades by the TMCP goons and expose the filthy nexus between the Hindutva fascist BJP-RSS and the reactionary fascist TMC regime in West Bengal.

Students of West Bengal are routinely facing the most brutal attacks from the fascist stormtroopers (TMCP) of Mamata Banerjee and the Gestapo of the RSS (ABVP). Amidst such extremist attacks it’s imperative for the anti-fascist democratic and progressive students to build up a strong resistance against the goons of the ruling classes, who are conniving to deprive the majority of students from poor households, Dalit, tribal and minority communities, from accessing higher education so that it can be reserved only for the elites. The fight against the atrocities can’t remain confined within pacifist protests and in asking justice from the very system that is utmost anti-youth and anti-knowledge in character. Rather, the students must learn from the rich legacy of West Bengal’s student movements and derive inspiration from them to build up a strong resistance struggle to not only fight for the rights of the students and youth, but also connect their struggles with the resistance struggles waged by the working class and the peasantry against the Hindutva fascist Modi regime and its lackey, the Mamata Banerjee-led TMC regime. It’s imperative that the students integrate their struggle with the greater class struggle of the working class and the peasantry to thwart any future attempt by the fascists to launch an assault like the one in Surendranath College. Such resistance struggles will demolish the very structure on which feral fascist outfits like TMCP or ABVP operate and become the harbinger of a new dawn to West Bengal.