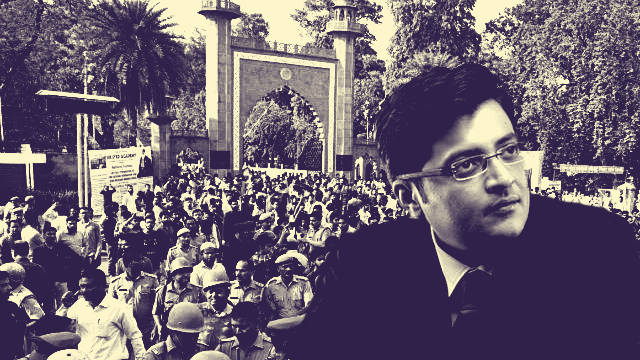 Republic TV’s Hindutva fascist thugs, masquerading as journalists, created a ruckus in Aligarh Muslim University (AMU) campus on 12 February 2019 citing a purported scuffle with students. Following its virulent attempt to vilify AMU and its students, the Republic TV became successful in having the saffronised Uttar Pradesh administration book more than a dozen students with sedition charges after their scuffle.

A group of Republic TV’s thugs reached the AMU campus in communally volatile Aligarh on 12 February morning, three years after a similar Zee News’s thug gang reached the Jawaharlal Nehru University (JNU) campus to vilify the left wing students who protested against Kashmiri Afzal Guru’s hanging to build up the narrative around a “tukde tukde gang”. The Republic TV crew claimed that AIMIM leader and MP Asaduddin Owaisi is going to visit AMU to attend a programme and started concocting a tale regarding an “anti-national” conspiracy brewing within AMU’s campus.

These unapologetic Hindutva bootlickers started filming their tirade by repeatedly adding adjectives like “terrorist” and “anti-national” to the institution and its students. The woman taking charge of the coverage called the students extremely radicalised Islamist terrorists and criticised them for inviting an MP like Owaisi. The Republic TV’s crew didn’t say though what crime would’ve been committed even if an MP like Owaisi was invited to the campus as a guest? Though Owaisi is a leader of a legal parliamentary party that’s accused of being a Muslim-version of the RSS and of helping the BJP win elections by splitting the Muslim votes, the RSS and its progeny portray him as a despicable terrorist to derive political mileage from the vilification.

When the students and their union members opposed Republic TV’s entry into the AMU campus and its filming without permission. The Republic TV crew entered into an altercation with the agitated student, which resulted in a brawl as Nalini, the lead of the Hindutva thugs started abusing the students and Proctor men using religious slurs. Facing a large number of agitated students demanding their ouster, the Republic TV crew had to run away from the campus but not before they called their saviour, the BJP.

Under a certain Hindutva fascist BJP leader, thousands of goons descended upon the AMU campus from different parts of Aligarh. They tried to gate crash the campus and attack the students, accusing them of harbouring Owaisi, who actually was not invited in any of the university’s programme on that day. Still, using the false accusations, the BJP continued the fracas and the Republic TV tried to gain TRP ratings.

Later, the BJP goons also tried to attack the Muslim-majority Dodhpur area of Aligarh, next to the Civil Lines Police Station near AMU, to create a terror among the local Muslims. As most of the shops and many residential units particularly belonging to the Muslims were demolished recently, they couldn’t ransack much. During their rampage, the BJP goons got full support from the police.

By allowing these Hindutva fascist thugs and their Republic TV collaborators to carry out rampage and rioting in the vicinity of the AMU, the Aligarh Police exhibited its loyalty towards Yogi Adityanath’s Hindutva fascist regime. By using the colonial-era sedition charges against the AMU students, the BJP government in Uttar Pradesh and New Delhi proved that they have been panic-struck as a massive public resentment against their communal, reactionary and fascist rule is gaining traction and prominence throughout India.

The AMU fiasco is a result of this hyperactive defence campaign by Modi’s lapdog media outlets. It’s a poor attempt by the ilk of Goswami, who has been a loudspeaker of the BJP and a far pathetic one than the mediocre Sangh Parivar’s dimwit propagandists known as “Pracharaks”. It’s an attempt to intensify Islamophobia to ensure that the Hindu community, especially the backward castes and Dalits, are communally polarised under the BJP’s flag before the crucial Lok Sabha election starts.

Adityanath’s regime has nothing in its credit score after ruling Uttar Pradesh with a divisive wand for two years but a host of name-change operations, a lot of Muslim lynching, atrocities on Dalits, and exploitation of the farmers through non-procurement of crops at higher MSP, non-clearance of sugarcane dues and unleashing of the Gau Raksha (cow protection) menace that has left loose thousands of bovine animals to ravage the fields and destroy the crops.

An attempt to divert the public attention from the burning problems to that of the “other” will help the Adityanath regime to carry out its onslaughts on people’s lives, livelihood and rights without any resistance. Like the Muslims, for whose higher education the AMU was founded in the 19th century as a college and reorganised as a university in 1920, the institution has become a worn-out punching bag to satiate the Islamophobic zeal of the Hindutva bigots and a plethora of their propaganda outlets.

Though AMU doesn’t have a culture of promoting free and critical thinking like western universities, rather emphasises on instilling unconditional subservience towards those in power among students, still, its Muslim identity has made it the thorn in the eyes of the Sangh Parivar-led Hindutva fascist camp. This is a reason it’s been attacked again and again by the saffron camp since 2014.

Since its formation, Modi’s Hindutva fascist regime has repeatedly targeted AMU for its Muslim identity to fan Islamophobia and boost vitriolic propaganda to portray the institution in darkest shades. The attack mostly comes out on the minority status of the university, which stops the Modi regime from changing its system to stop even the minuscule scope that the institution offers to the socio-economically backward Muslim community. Changing the name of the university and turn it into its own nemesis is a long-term project of the Sangh Parivar for which it has launched several attacks on the institution during the last few years of the Modi regime.

Recently, as a prelude to this recent Hindutva fascist attack on AMU, Adityanath spoke at an event and criticised AMU for not giving quota to the scheduled castes and scheduled tribes. He cunningly raised the issue of why a central government’s institution should be a minority institution to rake-up a few-decade-old controversy that’s already settled by the Supreme Court. More than the concern for the scheduled caste and scheduled tribe students, Adityanath’s focus was to exacerbate the enmity between the Muslims and the Dalits, tribal people and backward caste Hindus to reap political benefits from it during the forthcoming Lok Sabha election.

A few years ago, severe virulence-laden campaigning was done against AMU and its students by citing the presence of a portrait of Pakistan’s founder MA Jinnah in the university’s Student’s Hall. Though the photograph has been there for eight decades, the sudden upheaval was caused after the RSS-led thugs started instigating trouble at the campus and attacked the common students. A massive student resistance thwarted the attacks of the RSS-led Hindutva fascists at that time.

It’s clear that Arnab Goswami’s venom-spitting against AMU, his channels tirade to malign and vilify the institution aren’t anything new or isolated but the continuation of the Modi regime’s agenda of attacking institutions of higher education in the country to stop students from questioning those in power. It’s not that the presentation of the right facts will desist the Hindutva fascist camp from its vilification drive against the university, as this is a battle of narratives and the Hindutva fascist camp wants its crooked and jaundiced narrative to become the mainstream.

The only path now open before the AMU students is the path to fight back against the onslaught of Hindutva fascism by embracing progressive ideologies that strive to establish people’s democracy, secularism, socio-economic equality, justice and freedom for all. The more they can broaden and strengthen their struggle, the more they can push back the mediocre thugs to the bin of history, their ultimate abode. The faster it’s done, the better would be the result for the AMU students.