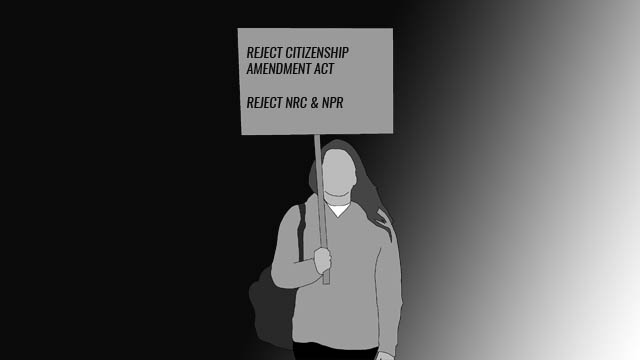 The Delhi Police attacked Jamia Millia Islamia University students on Friday, 13 December 2019, when they were organising a march to the Parliament against the pernicious Citizenship Amendment Act, 2019, which was enacted by Prime Minister Narendra Modi’s regime after the President’s assent. The Delhi Police, which reports to Modi’s closest associate and heir apparent Home Minister Amit Shah, the mastermind behind passing this anti-Muslim Act, charged batons at the protesting students and teachers, then fired tear gas shells and resorted to stone-pelting too. More than 63 participants in the protest rally were wounded and many were detained by the Delhi Police after they were severely beaten. The Delhi Police didn’t spare women too and wounded many women protesters.

This incident of gory atrocity not only irked the Jamia Millia Islamia but also angered the local Muslims, many democratic and progressive students, throughout the country, extended their solidarity to this movement. The Jamia Millia Islamia students have been protesting against the sheer Islamophobic, anti-people policies of the Modi regime for days, however, their movement crystallised and took a concrete turn when the Citizenship (Amendment) Bill, 2019, was passed in the Lok Sabha and the Rajya Sabha to become a law. The university, which never allowed students’ unions to function or the students to elect their representatives, couldn’t stop more than 2,000 students raising their fist in protest against the Modi regime’s anti-Muslim tirade.

At a time when the students of Jawaharlal Nehru University (JNU) have been fighting against Modi’s anti-student policies that aim at destroying the last vestiges of public education in the country, turning education into an expensive commodity that only the rich and upper-middle classes can afford, the Jamia Millia Islamia students hitting the streets of New Delhi added much to the woes of the Modi regime and the ruling Bharatiya Janata Party (BJP). The students of other universities in Assam, Manipur, Meghalaya, Tripura and West Bengal are also on the streets fighting against the Citizenship Amendment Act, now New Delhi joined the bandwagon too.

As Jamia Millia Islamia is a minority institution – alike Aligarh Muslim University (AMU) from which it splintered a century ago – the participation of its students in any anti-government protests, like that of AMU students, is vilified by the mainstream press, the government and the BJP’s lackeys through a plethora of propaganda tools. The macabre atrocities of the Delhi Police committed against the unarmed Jamia Millia Islamia students, especially pelting stones targeting women and men, became a manifestation of the sheer Islamophobia that runs in the veins of the policemen, whose real job was to protect these students from violence and crime.

A few weeks ago, the BJP-backed lawyers of Delhi’s courts beat the Delhi Police personnel black and blue, and the assault led the Delhi Police to organise unprecedented protests against the lawyers. The Delhi Police, despite being a victim of violence, couldn’t dare to act against the lawyers because the BJP patronised them. Instead, the policemen chose students, from JNU to Jamia Millia Islamia, for unleashing their violent machismo and prove their credibility to their master Shah. As Jamia Millia Islamia students are mostly Muslims, so the state violence saw no limits and the policemen derived sadist pleasure torturing young men and women, who are better educated than them, striving for an equal and just India.

However, all the violence by the Delhi Police couldn’t stop the students’ message to reach the democratic forces and the Muslim community of Delhi, who, irrespective of their political affiliation, stood right behind the students and participated in their protest marches. Southeastern Delhi’s Jamia Nagar, Batla House, Shahinbagh, Ghaffar Manzil, Okhla Vihar and Zakir Nagar, where ghettoised Muslims live, aroused against the discriminatory politics of the Modi regime and, thousands of men and women, for the first time in Modi-fied India, came out on the streets of Delhi, especially on 15 December 2019, to protest against the Act that aims to disenfranchise and turn them into second-class citizens in their homeland.

The assertiveness of the Muslims of New Delhi, who largely remained mute spectator all these six years of mayhem, was triggered by the protest rally of the Jamia Millia Islamia students on Friday, which instilled courage in them and now they are out in the streets to preserve the secular and pluralist character of the Indian Constitution that the Modi regime is trying to destroy in order to turn India into a corporate-funded theocratic dictatorship. The Delhi Police’s atrocities and the BJP’s attempt to sink the Jamia Millia Islamia students’ struggle through violence and Islamophobic tirade backfired and the Muslims are successfully and unitedly out in the open fighting for their just space in the land they call home.