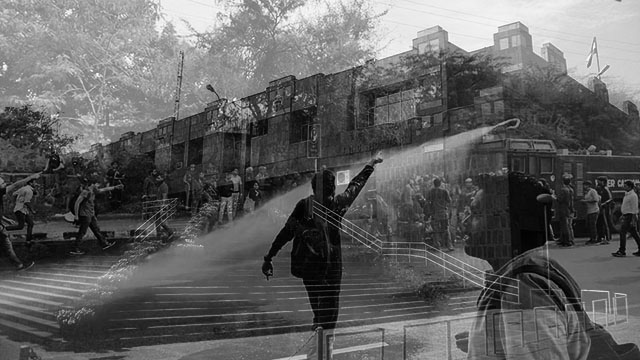 The attack on Jawaharlal Nehru University (JNU) students and teachers by the Hindutva fascist Rashtriya Swayamsevak Sangh’s (RSS) Akhil Bharatiya Vidyarthi Parishad (ABVP) thugs on Sunday, 5 January 2020, helped Prime Minister Narendra Modi’s regime to gloat once again, deriving sadist pleasure from the bloodshed of students. A mob of hundreds of alleged ABVP thugs attacked the JNU campus when the students and teachers were protesting against the unjust fee hike imposed by the Modi regime last year. The goons brutally thrashed many students and teachers, causing severe injuries. This ABVP attack on JNU campus and brutal assault of students stirred a massive outrage against the Modi regime and the feral organisations affiliated with the RSS.

The Delhi Police, which reports directly to Modi’s trusted lackey, Union Home Minister Amit Shah, abetted the crime and played the role of a complicit partner. The Delhi Police, while nakedly displaying its complicity and playing a partisan role, helped the perpetrators to enter the campus, carry out the mayhem and then leave the premises with sheer impunity. The ABVP thugs even attacked the reporters covering the issue, onlookers and Yogendra Yadav, a politician who came to protest. The attackers were masked and during their entrance into the campus, the streetlights were turned off. The lights were back after they left.

Throughout the country students, youth, opposition politicians and civil society members, including a section of intellectuals and celebrities who still hold their spine, vociferously expressed their anguish over such a fascist ABVP attack on JNU campus, orchestrated by the ruling dispensation. While Jamia Millia Islamia students, who faced the most brutal police violence in Delhi, gheraoed the Delhi Police headquarters, along with students of Delhi University, people came out on streets in Mumbai and other parts of the country to express solidarity with JNU students.

Slogans calling the JNU students “anti-nationals”, “Naxalites”, “jihadis”, etc, and chants for their death by shooting connected the dots regarding the identity of the perpetrators. Though many senior leaders of the ruling Bharatiya Janata Party (BJP), including ministers like S Jaishankar and Nirmala Sitharaman, condemned the attack, their sole purpose was to create the narrative that the leftwing students attacked the campus and that the ABVP, notorious for its militant track record, is a victim. This falsehood was also peddled by the BJP and the ABVP, and amplified by their toady press.

Amidst the protests against the attack and the flood of condemnation that followed after the incident got amplified through social media, why Modi regime and the RSS had to attack the JNU students is the big question of the hour. The answers will tell why the ABVP attack on JNU campus was necessitated and what’s that the Modi regime wanted to gain from this attack.

Firstly, the Modi regime is on backfoot over the contentious Citizenship (Amendment) Act, 2019 — CAA — and the National Register of Citizens (NRC), against which the Muslims of India are out on the streets. ABVP attack on JNU campus would distract the people’s attention from the anti-CAA and NRC protests, providing leverage to the Modi regime to launch an attack on the Muslims protesting, especially those in Shaheen Bagh of southeastern Delhi. There was a major attempt by the Delhi Police and the central paramilitary forces to evict the protesters from Shaheen Bagh, who have occupied one part of the street connecting Delhi’s Sarita Vihar with neighbouring Noida since last 15 days and protesting against the CAA and the NRC. The police action took place right after the ABVP attack on JNU campus.

Secondly, the JNU students’ resolute struggle against fee hike has caused severe ignominy for the Modi regime, which wanted to push the hefty fee hike by intimidating students. The JNU students’ struggle has so far stalled the fee hike process and no amount of administrative threats and persecution could scare the students. The ABVP attack on JNU campus was the only way out to break the resistance.

Lastly, the Modi regime, has been scared of students for a long time, especially after a nationwide outrage was sparked due to the Delhi Police’s brutal attack on Jamia Millia Islamia students. Considering the students — educated and informed — as its enemy and hurdle in its way to privatise the higher education sector, the saffron camp is desperate to pulverize the students of institutions like JNU, where a section of students dare to critically think and question the system, to do away with any threat emitting from the community.