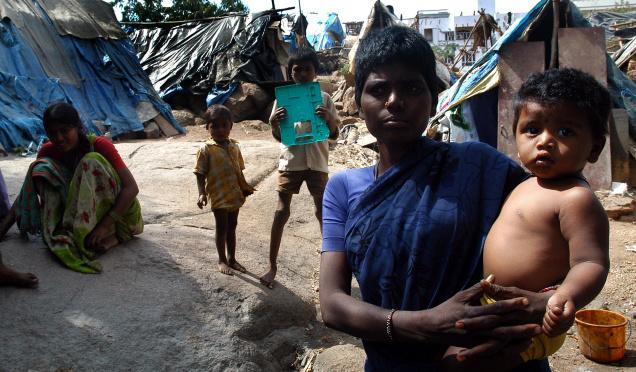 The government of Narendra Modi led BJP-RSS has drastically cut down spending on social benefits, whatever meagre amount was allocated to the poor and downtrodden people hitherto, using pro development rhetoric which finds a broad support base among the rich and upper middle classes of India. The Modi-fied agenda to cut the benefits from the programmes like rural employment, education, and other welfare schemes match with the endeavour of the government to compromise the public distribution system and provide excessive tax benefits to multinational corporate bodies.

The government of Modi, with utmost disregard for the poor and downtrodden people of the country, is advocating shamelessly the cut on social sector expenditures by painting a rosy picture of the future, and unlike any other government that has hitherto ruled India since 1947, the Modi government is an unapologetic government that is firm to pursue its course of corporate appeasement at the cost of the poor people of the nation.

The doldrums caused by the Congress government by uncontrolled inflation was utilised by the BJP to sweep the polls, thanks to massive corporate sponsorship. The report card used by the Modi government to showcase its success in controlling spiralling inflation, attributed to the low fuel prices, is now over due to increase in international crude oil prices.

The total slashing of the social sector funding was around Rs 170,000 crore this year including cuts in the budget expenses on different programmes that targeted economically weaker sections. The Modi government has cut its grant to the Rashtriya Krishi Vikas Yojana, for instance, to Rs 4,500 crore from Rs 9864 crore last year. That scheme is targeted at boosting agricultural productivity. The total allocation for the scheme has dropped to Rs 2,958 crore from Rs 7,889 crore. In the budget of 2015-16 fiscal year, Finance Minister Arun Jaitley reduced allocations to the agriculture department from Rs 19,852 crore in previous year to Rs 17,004 crore.

The ministry of Panchayati Raj is affected heavily with its allocations cut to Rs 94.75 crore from Rs 3,400.69 crore in previous year. Even no allocations are made for the flagship tribal hoodwinking projects like Backward Regions Grant Fund. The erstwhile Congress government at least provided Rs 483 crore to this programme.

The tribals, the poor and landless peasantry and the workers in the cities fought fiercely for the state to recognise their rights as citizens of the nation and through various pressures exerted mostly through mass movements compelled the previous governments to recognise their genuine demand for the right to receive government service in a nation, which has always boycotted the poor economically and socially.

The cuts in the social sectors are not peculiar to Modi regime only, if we look into the world scenario, including the recent victorious Tory government of the UK led by David Cameron, we can see a radical campaign of the right wing governments and parties to wipe off any remnants of social benefits or packages that may assist the poor and downtrodden people from their budgets. The corporate funded media houses of the USA follows a policy of accusing any advocacy for social sector financing as “socialism” and this model is now followed by the monopoly capital owned major mainstream media houses of most advanced and undeveloped nation.

The international monopoly capital, that works as the finance capital, which is worshipped and appeased equally by all shades of political parties in the parliamentary process, is demanding assertively to all countries and their respective governments to let its hegemony expand and its profit margin increase, as due to the internal crisis caused by the anarchy of production in the capitalist system the multinational corporations are still at the brink of financial collapse if not supported by the money of the tax payers. Hence, the model of the US economic bailout of 2008, when the corporations mired in crisis of capitalism were bailed out using billions of dollars from the public taxes, is now followed by each country.

The governments of nations like India drools for investment of the multinational corporations because of the huge amount of ‘cut money’ or ‘commission’ the government and its bureaucrats make out of such deals. With the passage of time, the monopoly capital has acquired complete control grip on the national economies of not only Asia-Africa and Latin America but also on the less developed capitalist nations of Central and Eastern Europe. Indian government, irrespective of the party at the helm is bound to follow the dictate of the foreign monopoly capital due to its tie up with the former through millions of strings and can only shed more of its pro people cloak and reveal the true identity of corporate boot licking.

The cuts in social sectors are not just a measure to punish the poor, but also an act of gratitude shown by the BJP towards the multinational corporations for their funding during the run up to the general elections of 2014. The cuts in the social sector will push more people towards poverty in the countryside and make the lives of the tribal and poor highly miserable, yet at the same time it will be providing huge incentives and lucrative schemes to foreign capital to plunder the national resources and the cheap labour of the country for their super profits.

The promised “better days” of Modi was very true and they did came, however, it was not destined for the poor but for the foreign monopoly capital and their Indian agents.