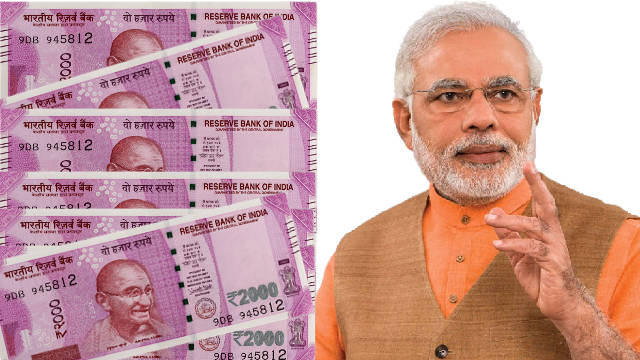 Narendra Modi wants to play all roles once and since the Uttar Pradesh assembly election is reaching the climax, his desperation to prove himself as an omnipotent and omnipresent leader of the nation-state has reached the peak. Without sparing a word on the worsening economic condition of the country, Narendra Modi attacked the economists who were critical to his note ban and subsequent demonetisation decision, following the direction of his RSS deployed script writer.

While addressing an election rally in Maharajganj for the Uttar Pradesh assembly elections, Narendra Modi attacked the economists critical of his demonetisation decision by citing recent data from the CSO, which claimed that the Third Quarter (Q3) GDP growth of India in the Financial Year 2016-17 (FY 16-17) was 7 per cent. Modi claimed that contrary to the “Harvard” people’s (economists’) calculations the economy of the country didn’t suffer during the demonetisation exercise due to his “hard work”.

The Indian Express quoted Modi: “..on the one hand, there are intellectuals who speak in the name of Harvard University, and on the other, a poor mother’s son is trying to change the economic policy of the country.”

In a self-eulogising drive, Modi again ascribed himself the honour of being a “poor mother’s son” a title he uses randomly, despite living a luxurious life in Race Course Road, to bamboozle the common people into believing that he is indeed a pious personality fighting all odds alone. Devoid of any economic logic, Narendra Modi again exemplified the mediocrity of the RSS footsoldiers when he quoted the GDP of the Q3 to justify his point.

Narendra Modi attacked the economists using the data from CSO claiming that its report on the GDP growth has absolved the BJP government’s demonetisation drive of any wrongdoing to the economy. However, soon after releasing the data of GDP growth during the Q3 of FY 16-17, Chief Statistician TCA Anant was quoted by Indian Express saying: “I can only tell you what third-quarter figures show. You may interpret them in whichever way you like…More numbers will come in future and we will update accordingly…am not here to attack or defend.” He also said   “difficult to assess without lot of data coming in”, to prevent questioning on the impact of demonetisation exercise on the GDP of India.

The Chief Statistician was reluctant to assert or draw a conclusion because the information and data, based on which the agency has released the GDP report for the Q3 of FY 16-17 isn’t comprehensive and holistic. TCA Anant clearly escaped vouching for the success of demonetisation and still, Narendra Modi attacked the economists, including those who are die-hard advocates of the neo-liberal economic regime that he is serving wholeheartedly.

The CSO data shows that the GDP growth has dropped from 7.3 per cent in Q2 of FY 16-17 to 7 per cent in the Q3 (October to December). The month of October is generally a month when the business volumes of the country rise to peak due to various Hindu festivities, including Diwali in North India. It provides such an impetus to the slog economy that despite getting orders from the US government’s USAID organisation and Catalyst to initiate the demonetisation exercise, Narendra Modi’s government waited until the festive season was over to help the big corporations reap as much profit possible.

The demonetisation declaration was made by Narendra Modi on 8th November and the note ban was imposed from the midnight of 8th/ 9th November 2016 and it continued until 30th December. During this period the sowing of Rabi crops suffered drastically, automobile sales, FMCG, and the construction industry witnessed less sales to the artificial crisis of cash imposed by the Narendra Modi government.

The fall in sales tally across different industries during the months of November and December and the subsequent cash crisis, which is still prevailing at large, will push these industries into a crisis due to which many companies will have to and many companies are laying off their workers, especially the most vulnerable contractual workers. This is already adding more heads to the unemployed

Narendra Modi must also take a note that the MNREGA scheme, which Arun Jaitley claimed the government will provide ₹48,000 crores in the FY 17-18, suffered badly due to the cash crisis and the new regulations that are linking Aadhar card with job accounts and eventually denying the payments of those poor people who’ve toiled for the scheme facing all odds, however, doesn’t have Aadhar Cards, or the change in their fingerprints are creating problem for their identification.

The Indian economy was already limping before Modi started the demonetisation exercise. When 86 per cent of cash in circulation was withdrawn from the economy, numerous man days were lost due to long queues outside banks for exchanging or depositing the demonetised currency, when the entire trading sector, the cash-driven agriculture, small and medium enterprises, and other sectors collectively suffered due to the cash crunch, economy couldn’t escape the sufferings it was deliberately subjected to.

When Modi attacked the economists for their criticism of demonetisation, he overlooked the fact that despite the loyalty of those economists towards the global monopoly and finance capital, which is similar to Modi’s, they didn’t predict an immediate repercussion of demonetisation in the Q3 of FY 16-17. Rather if we summarise their predictions it says that the economic growth of India will fall around 2 per cent due to the demonetisation exercise and it will be a long-term shock.

Narendra Modi manifested his disarrayed economic knowledge once again in public to hoodwink the poor people before a crucial phase of the Uttar Pradesh assembly election. When he compared the GDP growth rate with the success of his demonetisation policy, Modi forgot that India’s GDP has remained disconnected with the economic welfare and progress of 70 per cent of its population since the time the government has embraced the neo-liberal economic policies. At times there were speculations of double-digit growth of the economy while the majority of the Indian people lived on less than one US Dollar a day.

According to the International Labour Organisation’s findings, the Indian economic growth story has left behind the poor and the partially poor segments of the society, who form the majority of the country. The major cause that contributes to the rise in the number of people living in utmost or semi-poverty is the lack of public welfare spending by the state and lack of employment opportunities.

While Modi and  his sycophant Arun Jaitley were busy fooling people by quoting the CSO data on the GDP growth during Q3 of FY 16-17, they forgot that until now, neither the Reserve Bank of India (RBI), nor the Finance Ministry, revealed the exact number of currency notes in the denomination of the demonetised ₹500 and ₹1000 notes deposited in the banks throughout the nation so that the impact of demonetisation on the black money hoarded in cash (which was eventually 5 per cent of the total black money in the country) could be known and the merits of demonetisation can be seen.

By refusing to release the information to the public, the RBI and the Finance Ministry are working in tandem to keep the real picture of the demonetisation exercise concealed, so that Modi and Arun Jaitley can paint a rosy picture regarding the “success of demonetisation” and again connect it with the victory of the “poor people” when it was exactly the opposite.

Throughout the nation the rich, the super rich, and the upper middle class did rejoice about the sudden ban imposed on the currency because the demonetisation decision was known to black money hoarders, share brokers, hawala dealers, etc. even in the month of April 2016. Apart from that the affluent upper-middle class and elites have better access to plastic money and electronic transaction systems. However, it was the poor who really suffered and will be suffering due to the demonetisation exercise of Modi government in the long term due to the lack of banking system and due to the unavailability of any alternative transaction methods.

The demonetisation repercussions cannot be immediately felt due to several reasons, however, due to the ongoing cash crunch and a large uncertainty looming over the future economic adventurism of Modi government, the small and medium scale enterprises across the country are very conservative in their approach towards investment and hiring new workers.

Most of the companies in the manufacturing, healthcare and real estate sector are since taking advantage of the demonetisation exercise to show losses in their books to dodge tax reports and also to deceive their employees and workers and only provide a very low hike to the present white collar employees during the annual appraisal cycle that will impact their salaries from April 2017 onwards.

Mostly the daily wage earners and contractual workers in the manufacturing, construction, and other industries, employees of small firms, handicraft and jewellery artisans were retrenched in not only metro cities like Delhi, Bengaluru, and Mumbai, but also in tier II and III towns like Surat, Jamnagar, Ahmedabad, etc.

The impact of this crisis will be felt till the end of the Q3 of FY 17-18 unless the government brings any further catastrophe for the economy. The harvesting of the Rabi crop is due in the late spring and the low output of crops will ignite retail inflation once again, which can spur out of control between May to July 2017. Especially the prices of potato, onion, and tomato can shoot abnormally. The excessive hoarding of food and staple products by the BJP supported unscrupulous traders and FMCG / retail giants will intensify the skyrocketing of the prices of essential commodities.

Despite the cash withdrawal limit liberalisation implemented by the government since January this year, it will take a long time for the economy to heal from the shock of demonetisation, which was an ill-thought decision imposed on the people of India by the Modi government to appease the US government’s agency USAID and its demonetisation advocate- Catalyst.

The BJP and its paternal body RSS is servile to the interests of global monopoly and finance capital and each of their decisions is the hallmark of their servility. Under the garb of “nationalism” and “patriotism” the Modi government is turning India into a neo-colony of foreign corporations and to serve their very interests Modi and his coterie is constantly lying to the public using fabricated data and information on demonetisation.

Narendra Modi attacked the economists for their criticism of demonetisation to prove that his own economic intellect is superior to all economists, which unfortunately isn’t true. His megalomaniac attitude and desire to install himself as a Hindu monarch of the republic is quite perilous for the entire nation and its democratic fabric. By lying and deceiving people, Modi can add few more seats to his rule but cannot prolong it for long. Demonetisation was the very spade with which the Modi government has dug its own grave, at least in the electoral playground.