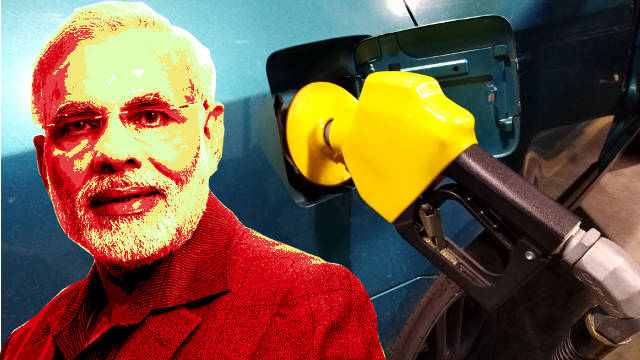 There cannot be any comparison between a statesman and a con, or the worst, a dignified con. When the city burns, or for that matter when a hole is burned in the pocket of the common people, the modern-era Nero shouldn’t play the violin, but enter into new theatrics, which wouldn’t change the reality a bit. Consider the example of the megalomaniac Indian Prime Minister Narendra Modi, who, indifferent to the rising fuel cost (which he once promised to control among his many other unfulfilled election promises) that’s causing great inconvenience to the people, is instead focusing on social media challenges with his celebrity cahoots over fitness. He, his sycophant ministers and party leaders are posting fitness challenge posters and discussing everything under the sun, except what the government is going to do or planning to do, to arrest the rising price of petrol and diesel.

Since the Karnataka assembly election, the Modi government has raised the prices of petrol and diesel at least 14 times in 14 days. The failure of the BJP to control the fuel price rise is nothing new. Ever since coming to power, Narendra Modi and his bunch of mediocre, foreign-capital-worshipper economists didn’t pass any benefits of the then-prevailing lower international crude oil price to the consumers under the pretext of saving enough amount to meet the future price rise challenges.

The honeymoon period of lower crude oil price is now a distant past as a volatile international scenario, following the ascension of Donald Trump to power in the US, is constantly increasing fuel price. Brent crude oil price touched $80.00 per barrel on 19 May 2018, following the arbitrary decision of the fascist Trump regime to re-impose sanctions on Iran, after the cancellation of the Iran Deal reached between Tehran and the West about removing sanctions over Iran in return of the latter’s withdrawal from nuclear weapon development.

Apart from the dumping of the Iran Deal by Trump regime, production cut by Russia and OPEC and a major slump in Venezuelan production, following the CIA-sponsored terrorist uprising against the Maduga government, also fuelled the price rise amidst strong international demand. Later the price of Brent crude oil dropped to $76.00 per barrel on 27 May 2018, however, it didn’t ease the prices in India.

Instead of protecting the people with the purported fuel-exigency fund that his government purportedly created since 2014 by not reducing the fuel prices, the Modi government has immersed itself into all sort of rhetoric mongering, without taking any concrete step to deal with the issue.

India imports nearly 80 per cent of crude oil required by it. In the Financial Year (FY) 2017-18, the total trade deficit rose to $160 billion from $40-50 billion in the previous FY. The total bill of fuel import in FY 2017-18 was $70 billion. The oil companies made a kill in the last FY and they managed to book profits even when the people bore the brunt of the rising prices of petroleum product. While the Bharat Petroleum suffered losses in the third quarter (Q3) of FY 2017-18, the Indian Oil Corporation, the giant oil marketing company, made a killing in the same Q3 of FY 2017-18 by posting a standalone net profit of ₹705.22 crore, a massive 55.1 per cent YoY growth.

The tall talks of passing the benefits of the corpus fund built using the surplus earned during the lower fuel price days to the consumers is now not heard any more, rather the social media trolls and mediocre economists on the payroll of the RSS are trying to condemn the people for raising the issue of fuel price hike, which they claim is actually benefiting the nation.

Oil Minister Dharmendra Pradhan is busy these days due to the forthcoming assembly election in his state Odisha. Bringing the oil prices under the GST regime is the only solution he could offer at a time when the diesel price has reached record height of ₹69.06 per litre in Delhi and ₹71.61 per litre in Kolkata, while petrol prices rose to ₹78.12 and ₹80.76 per litre in Delhi and Kolkata respectively.

It’s true that the high taxes and excise duties imposed by the central and state governments have been a major cause of fuel price rise and they contribute immensely to consumer price inflation as commodity transport cost increases significantly with a hike in petroleum price. The abolition of the different taxes and the imposition of the GST will still not help arrest the price rise due to the undying greed for super-profit extraction with which the state-owned oil marketing companies are operated. By removing the price mechanism over oil prices in early 2000s, the Atal Bihari Vajpayee-led NDA government threw the oil sector the mercy of speculators, who would buy stakes when the state-owned oil marketing companies were put on disinvestment table by subsequent governments. Their collective greed now drives the oil prices and the government is no way thinking of reintroducing the price control mechanism to keep it under control because of its obligations to World Bank, IMF and the WTO.

Today, the Modi government is not willing to discuss its plans (which don’t exist) to control the oil price hike. Except for some vague ideas, Dharmendra Pradhan would not disclose anything, while all ministers and leaders of the Modi regime would be busy in their photo-op shows, a trick they learned from the megalomaniac prime minister – how to divert public attention from burning issues to non-issues propped by extremely carefully operated PR management campaigns. While oil prices are shooting to the ceilings, Narendra Modi was busy getting photographed doing a new stint or another. This shows that the Modi regime is existing on the basis of PR stunts and will go and fight each election bashing Nehru and the Congress, whom the narcissist 67-year-old man will blame for his own failures.

Fitness is a good habit to acquire and when one is running a government, then their primary focus should be on the fitness of the government, especially economic fitness of the nation. By celebrating their personal fitness and tagging celebrities in a social media campaign, the prime minister and his sycophants are actually trying to divert the people’s attention from the state of peril in which the Indian economy presently is, especially after the recent spurt of price rise of petroleum products.

Neither the Modi government nor the BJP will learn any lesson and work towards easing life for the common people as they know well that they can sail through any rough sea of anti-incumbency by fuelling communal hatred and polarising the society. It’s only the daring struggle of the people, on the streets, encircling everything and everyone who represents the BJP, the militant struggle of the people against the anti-people policies of the government, that will actually work as a shock brigade and not only force the Modi regime and the oil companies to roll back the high fuel prices, but also hasten the fall of the fascist kingdom that the Hindutva fascist camp is trying to set up.