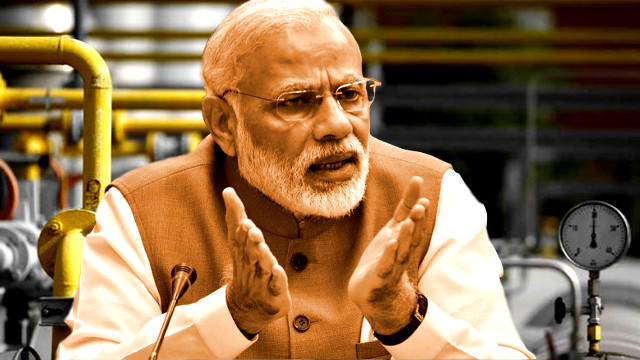 Thanks to Narendra Modi’s loyalty towards his long-time funder and one of India’s top-notch crony and comprador capitalist Gautam Adani that the Adani Gas Ltd has now placed bid for supplying city gas in 32 cities on its own and in 20 cities through a joint venture with state-owned Indian Oil Corporation (IOC), as per the report of PTI. The bidding for the biggest city gas distribution licensing, which is offering 86 permits for selling cooking gas and piped gas closed on 10 July 2018.

As per the report of PTI, India Gas Solutions Pvt Ltd – a 50:50 venture between BP plc of the UK and Mukesh Ambani’s Reliance Industries – looked very closely to foray into this city gas distribution opportunity, however, this company dropped out at the last round. The bids received so far will be evaluated between 12 to 18 July and the contracts are expected to be awarded in October 2018.

With nearly no or very low-intensity competition in the bidding process, the Adani Gas Ltd stands all chance to bag the contract, including in those 20 cities where it has partnered with the IOC. The supply of piped gas to households is done under Narendra Modi’s project of delivering piped cooking gas to 10 million households. The round is likely to attract investments of ₹700 billion, as per the Petroleum and Natural Gas Regulatory Board.

The Modi government is targeting to raise the share of natural gas in the primary energy basket to 15 per cent from the current 6 per cent, within a few years. This city gas distribution bidding round is the 9th round after the government decided to call bids for 86 geographical areas by clubbing the adjacent districts. These geographical areas cover 24 per cent of Indian territory and 29 per cent of the population.

With Adani Gas Ltd all set to winning its bid along with the IOC, it will be catering to 60 per cent of the geographical areas and thereby it would be the largest beneficiary of Narendra Modi’s 2020 piped gas project. This is another classic example how the government-owned corporation collaborated with the major donor of the ruling party and ensured that a project whose main suppliers should have been state-owned firms, is won by the crony and comprador capitalist enterprise.

Narendra Modi’s much-hyped pro-poor schemes are actually designed by the RSS stalwarts to cater to the ever-growing lust and greed of big corporations, owned either by foreign capital or Indian comprador capital. From enabling the big banks and e-wallet companies like the PayTM to benefit from the demonetisation drive to allow the big corporations like Adani, Reliance and Vedanta benefit from the river linking project, the Modi government has done everything possible to help the big corporations pocket more money by plundering the Indian people.

In the oil and gas market, India has no scarcity of state-owned suppliers and instead of choosing them to implement a crucial project like providing piped cooking gas, the Modi government’s overt dependency on private participation, especially from Adani and Reliance, proved that the only focus of the present dispensation is to fill coffers of those whose money helped it win elections.

There are several instances in the past that show how the Adani Group and Reliance Industries have immensely benefited under the reign of Narendra Modi. In comparison to them, bagging a project’s 60 per cent market from the government by partnering with a state-owned corporation (no idea why IOC selected Adani Gas as a partner and didn’t bid alone despite being a giant) will be washed down the funnel of public memory.

Anti-corruption movements in India during the Congress era tapped the people’s emotion and hatred against the practices like crony capitalism. However, as most of those movements were led by the RSS and sponsored by big foreign monopoly and finance capital, such movements became scarce in Narendra Modi’s India. With all those anti-corruption crusaders given lucrative positions and offered bigger baits, they have become nothing but bootlickers of the Modi regime.

A lack of vigilance on part of the people’s political forces and the absence of strong protest movements like the one in Thoothukudi of Tamil Nadu against the notorious British mining giant Vedanta group’s Sterlite Copper, allowed the Modi regime to offer lucrative deals to its funders. There will be no stop to this and the next election will be fought by the BJP riding on the wealth of Adani and Ambani, which will help it sweep the election provided the communal polarisation is done correctly.

To stop the constant loot and plunder of India by these big corporate houses with the help of the utmost corrupt Narendra Modi regime, it’s imperative that anti-corruption movements are build up from the grassroots. A massive vigilant movement to expose the dirty nexus between the ruling BJP and the comprador and crony capitalists like Adani group or Reliance, will certainly trigger a massive movement against the present regime and thereby help the people to stop corporate loot and plunder.