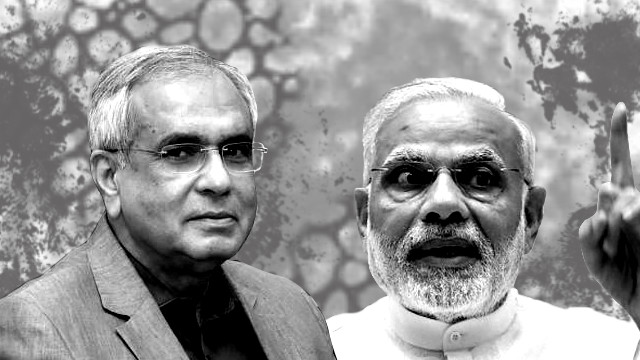 According to NITI Ayog Vice Chairman Rajiv Kumar, Prime Minister Narendra Modi-led National Democratic Alliance (NDA) government will bring a series of “Big bang reforms” within the first 100 days of its functioning. These big reforms include a complete overhaul of the labour laws, privatisation drive and closure of 42 public sector units (PSU), and creation of a land bank for big corporate houses through forcible land acquisition from farmers. This revelation is a trailer of a quite horrific series of attacks that will be unleashed on the working class, the peasantry and the common people in the coming days.

Under the aegis of the Hindutva fascist Bharatiya Janata Party (BJP), the NDA government will sell off the country, its resources, labour and sovereignty to the big corporations, foreign and domestic, in lieu of kickbacks. The Rashtriya Swayamsevak Sangh (RSS), the parental body of the BJP and the monitor of the Modi regime, has been pushing for these reform measures to please its masters. As the BJP and the RSS have received the highest funding from Indian and foreign corporations for the election campaigning and for Hindu polarisation, the corporate houses now need a higher return on investment from the Hindutva fascist camp. The series of attacks will have severe implications on the people and the economy of the country in the coming days.

The attack on labour

The biggest attack will be the attack on the labour by the Modi regime. The Indian economy is already suffering a 45-year-high unemployment rate, which even the Modi regime accepted after vehemently denying the fact during the election. In such a situation, privatisation or closure of 42 PSUs will give a big shock to the ailing economy and affect demand at the grassroots. The rippling effect of this shock and the unavailability of an alternative employment opportunity will push the jobless workers to a reign of utmost crisis. Add to this the proposal of labour law reforms.

Indian labour laws consist of hard-won rights of the working class, like eight-hour workday, overtime policy, provident fund, gratuity and social securities. However, since the liberalisation drive started in 1992, the working class has been suffering due to naked corporate appeasement by subsequent governments. The formal workers, who enjoy the labour rights and minimal social securities, are facing an attack on their rights as the Modi regime is trying to snatch their right to unionise, bargain or even avail social security benefits, including pension after retirement.

Modi’s pro-market approach has turned the minimal social-securities that the organised sector’s working class enjoyed, like Employees Provident Fund, pension, health care, etc, into instruments to fulfil corporate greed. The interest rates on provident fund and pension are reduced, the pool is invested in the market to boost the financial capabilities of the big foreign finance capital-owned companies and the future of the working class is left at the mercy of market speculation.

India’s largest workforce is the informal workforce, which works not only in the informal sector but is increasingly becoming a significant workforce in the formal sector as the corporations are finding it absolutely easy to follow a “hire and fire” system with such workers and as they come without the basic rights like a formal worker, it’s easy to exploit them severely. Though the practice started with the draconian Special Economic Zones in the early 2000s, it has acquired an epidemic proportion by now.

When Modi and his coterie, including his lackey Kumar, talk about labour law reform, they dare to do what the British colonial rulers didn’t dare. The right of the workers to unionise, their right to a fair wage, the working class’s demand for a minimum wage, and their right to social security, healthcare, pension, etc, will be scrapped with a few strokes of a pen. In a situation where the unemployment rate is at its peak, the working class will be forced to become modern slaves in the literal term. The labour law reform will snatch away all those rights they’ve won through hard struggles since the colonial era and they will be subjugated by the might of big corporations.

One of the principal reasons for the Indian ruling classes to support Modi’s election in 2014 and 2019 has been his commitment to carry out a vigorous privatisation drive that will sell off the Indian PSUs, created with money from public exchequer, to big corporate sharks at a throwaway price. Modi couldn’t find large buyers for PSU stakes whenever he tried to carry out disinvestment during the first five years of his rule. This resulted in cross buying of PSU stocks by other PSUs.

The resources of the big PSUs like the State Bank of India (SBI), Life Insurance Corporation of India (LIC), Oil and Natural Gas Corporation (ONGC), etc, were drained to buy stakes in other PSUs. The government’s cross purchasing policy created additional financial stress on these PSUs and affected their balance sheet. This disinvestment drive created an artificial crisis as the major PSUs like ONGC, SBI, etc, and locked much of their funds in such PSU stakes which are not deliberately modernised by the Modi regime.

This time, Modi and his coterie are hopeful about wooing the big foreign capital with the promise of higher returns from the PSUs. However, this privatisation drive will not become successful for most of the PSUs and a lot of these 42 PSUs will either be shut down or their employee strength reduced considerably. The major attack of this privatisation drive will be upon the PSU banks.

The PSU banks have been suffering due to a severe Non-performing Asset (NPA) crisis that was Rs 895.601 trillion in December 2018. The major cause of the NPAs is the bad debts of the PSU banks caused by the deliberate non-payment by corporate bodies that have a good tie-up with the ruling party and the bureaucracy. Nirav Modi, the diamantaire who fled with Rs 110 billion, apparently after a good bonhomie with Prime Minister Modi, or Vijay Mallya, the owner of the Kingfisher group, who fled with the assistance of former finance minister Arun Jaitley, are some of the examples of how cronyism is sinking the PSU banks.

Now, under the pretext of managing the NPAs and streamlining the banking process, the Modi regime will handover the PSU banks with a huge amount of public deposits to the very sector that has been looting them for years. It will bolster the corporate houses with easier access to credit and without the compulsion of paying back. This conspiracy will not only allow the big foreign monopoly and finance capital to tighten its grip on the Indian monetary sector, but it will also jeopardise the savings and deposits of the common people in the PSU banks, which will now be at the mercy of corporate greed and lust.

Also, as the crucial sectors like defence, steel, oil, aviation, telecommunication, etc, are widely opened up for foreign investment, the national security of India, which Modi and the entire Hindutva fascist camp under the RSS call their principal focus area, will suffer significantly. There are no contingency plans to secure India’s economy and sovereignty from foreign control, as the self-styled nationalists and patriots of the Nagpur variant are smirkingly handing over India’s crucial resources to big foreign capital.

After making tall claims about farmers during his electoral speech, Modi is now ready to unleash a reign of terror on them. The farmers, suffering due to an acute crisis of semi-feudal production relations, lack of land reforms, unavailability of irrigation facility, higher unsubsidised prices of fertilizers, lack of proper minimum support price (MSP) for crops, and above all, mounting farm debt crisis that is tightening the noose of death around their neck, will now face a nationwide threat of land acquisition by corporate sharks as well.

Due to the prevalence of feudal land ownership pattern throughout India, the average landholding by Indian farmers is already quite low. Moreover, an ever-increasing population, growing real estate sector and rising losses in agriculture have exerted huge pressure on the agriculture sector, which has been shrinking since independence. The agriculture sector’s survival is dependent on the availability of irrigated fertile land, and unrestricted aggression on farmland is aggravating the agricultural crisis and also hampering India’s food security.

Through their glorious struggles in different parts of the country against corporate aggression on agricultural land, especially in Singur, Nandigram, etc, the farmers had forced the previous Congress party-led United Progressive Alliance (UPA) government to enact the Right to Fair Compensation and Transparency in Land Acquisition, Rehabilitation and Resettlement Act, 2013 (Land Acquisition Act, 2013). However, for Modi’s donors, the Adanis, the Ambanis, and the Vedantas, even this minimal act was problematic. They made Modi bring the draft of the draconian Land Acquisition Bill, which was passed in 2015.

The 2015 Bill creates five special categories of land use: 1)  for defence, 2) for rural infrastructure, 3) for affordable housing, 4) for industrial corridors, and 5) for infrastructure projects including Public Private Partnership (PPP) projects where the central government owns the land. The 2015 Bill exempts these five categories from provisions of the Land Acquisition Act, 2013, which requires the consent of 80% landowners to be obtained for any private project on their land, and that of 70% for PPP projects.

The 2015 Land Acquisition Bill also allows an exemption for projects in these five categories from requiring the mandatory Social Impact Assessment to identify those affected and from the restrictions on the acquisition of irrigated multi-cropped land imposed by Land Acquisition Act, 2013.

Modi and the BJP, armed with an absolute majority in both houses of the parliament, will definitely bring in more draconian measures to ensure that the corporate houses get more leverage against the farmers and even multi-cropped, irrigated land can be acquired without any hassle for any project that can be wrapped as a project of public interest under the five categories.

With land, their last asset for a livelihood, coming under the threat of corporate aggression, the farmers will be pushed towards far more uncertainty than ever. The promised support of Rs 6,000 per year, which the Modi regime used to dupe the farmers during the election, will limit itself among a very minuscule portion of the farming community, while the rest will be driven to despair in the days to come.

As the Modi regime is pushing the working class and the farmers towards despair and semi-pauperisation through its pro-corporate policies, as the mining giants like Gautam Adani are winning the contract to plunder the resources of Chhattisgarh’s pristine forest areas through massive deforestation, it’s the time for the anti-fascist and progressive forces to build up a massive and united movement of the working class, the peasantry and the tribal people against the Modi regime’s fascistic policies.

Divided by caste and communal toxin, the class of the poor can be united only by citing their class interest in thwarting the looming danger on their lives and livelihood. As none of the organisations has the singular power to rake up a countrywide struggle of the working class, the peasantry, the tribal people and other sections of the oppressed masses, therefore, all those forces that are opposing these draconian moves by the Modi regime, especially the anti-fascist, leftwing and democratic forces, must join hands to build up a united resistance. Without resistance and counter-struggle to establish people’s democracy by uprooting Hindutva fascism from Indian soil, there cannot be any real solution to this clear and present danger.