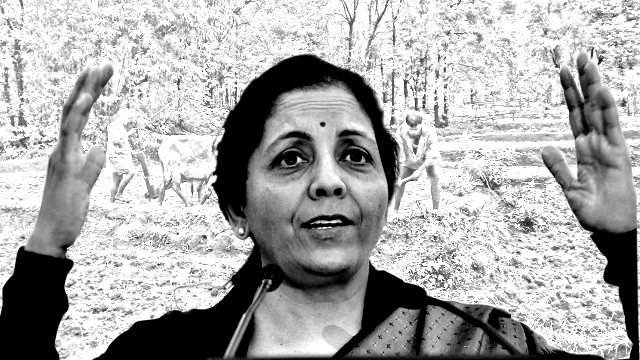 Finance Minister Nirmala Sitharaman presented her maiden Union Budget 2019-20 to the parliament on Friday, 5 July 2019. This budget, which follows the footsteps of the interim budget passed by her predecessor and colleague Piyush Goyal in February, has no substantial benefits for the farmers though there has been a lot of rhetoric spinning by Sitharaman and her Bharatiya Janata Party (BJP) colleagues over farmers’ welfare according to the perceived vision of Prime Minister Narendra Modi. The Indian agriculture sector is in a deep crisis and in such a situation, the Union Budget couldn’t show any positive signal that can promise a tectonic shift at the grassroots.

Sitharaman quoted MK Gandhi’s famous “soul of India lives in villages” while talking about rural India in her budget speech. The budget allocation for the Ministry of Agriculture and Farmers’ Welfare saw a hike of 78%, one of the highest hikes in decades. The ministry got an allocation of Rs 1,390 billion for the financial year (FY) 2019-20. Yet, the lion’s share of this allocation will go towards Modi’s flagship PM-Kisan scheme under which a direct bank transfer of Rs 6,000 is done to farmers’ bank account per year in three equal instalments of Rs 2,000 each.

While the scheme had Rs 200 billion allocated during the previous regime and the revised estimate was set at Rs 872.18 billion, Rs 750 billion has been allocated for it this year. It’s set to expand and include all farmers as the government removed the land capping for qualification earlier. If Rs 750 billion is deducted from the total allocation, then the ministry is left with Rs 640 billion for all other expenses, including the most crucial irrigation and Research & Development (R&D).

Though the rhetoric of doubling the farmers’ income by 2022 was reiterated by the BJP every time there is a new budget, still, there has been no clear indication how that could be achieved as there has been no significant progress in catapulting the agriculture sector from the deep crisis it’s in at present. The agriculture sector’s growth is extremely low at the moment. Agriculture GDP decreased to Rs 4860.94 billion in the first quarter of 2019 from Rs 5869.41 billion in the fourth quarter of 2018. The sector needs to grow at a pace of 18% according to economist and BJP’s own gadfly, Subramanian Swamy. That rate is seriously unachievable unless the Modi regime either fudges the data or does something extraordinary to turn the tables overnight.

Even the minimum support price (MSP) announced a few days ago for the Kharif season didn’t show any significant increase that could add up to the extra income that Modi promised will come to the farmers gradually. Though the MSP of Kharif crops were increased with much fanfare and with a false claim of abiding by Swaminathan Commission’s report last year, this year the whole hullaballoo is missing as the Modi regime is aware that the farmers can’t be duped by dangling the bait of higher MSP any more, as it never materialises at the grassroots.

The agricultural R&D got only Rs 80.78 billion, a mere Rs 1.25 billion increase to the Rs 79.53 billion allocated in FY 2018-19 revised estimate. If the government, as Sitharaman discussed in the budget speech, is serious about “zero budget” agriculture, under which the farmers follow a semi-organic cultivation model, then R&D is very crucial, and with a meagre allocation, it won’t be possible to get the best output in agriculture. Apart from that R&D is crucial to increase per acre crop yield with less water and other inputs in view of a rising population and extreme pressure on agriculture, yet no relief came on this front in this budget, which proves that the Modi regime will ignore the role of R&D in increasing yield and farmers’ income for the rest of the months of this FY.

One biggest challenge before Indian agriculture is the water crisis. The Modi regime has been talking a lot about water power and has even formed the Ministry of Jal Shakti as the apex body to manage all water resources throughout the country. According to Sitharaman, 1,592 blocks in 256 districts are overexploited. It’s a fact that the groundwater level is at tatters and there is no proper water usage policy in farming.

More than 80% of water is consumed by agriculture in India, which is often done in an unplanned way due to lack of proper training and awareness. A large part of the country suffers due to drought and irregular monsoon rains can’t properly feed the rain-dependent agriculture, leading to farm distress and farmer suicides. In such a situation, a proper water-usage policy for agriculture, backed up by rainwater harvesting and wastewater treatment is necessary to meet the challenge thrown by the unprecedented water crisis. However, Sitharaman’s budget shows no headway regarding water usage management for agriculture.

For the flagship irrigation project of the Modi regime — Pradhan Mantri Krishi Sinchai Yojana —  the budget allocation is raised to Rs 35 billion for this fiscal from Rs 29.55 billion last year. This increase is not as much as a proper, scientific and robust irrigation system would demand. Rather than focusing on improving the irrigation system, the government is more keen to sell the crop insurance plans to the farmers, which result into higher profits for the service providers, who are mostly big finance capital-owned companies.

Apart from water, the biggest challenge to the Indian agriculture sector is the skyrocketing debt crisis. The farm debt is rising each day as the farmers, who take credit from banks, cooperative banks, unscrupulous moneylenders and feudal usurer thugs, are facing immense difficulty in paying back their debts. The fall in production due to climate change, the scarcity of water, an elusive monsoon, and lack of support system forces the farmers to become delinquent and many farmers commit suicide when they are no more able to pay back their debts.

For the Modi regime, debt waiver of the farmers isn’t a solution to the farm debt crisis and it was clear from the BJP’s attitude towards the issue from the beginning. Though the Modi regime claimed that it will resolve the debt issue once and forever, it didn’t show any roadmap for the same. Even in Sitharaman’s budget speech, nothing was clarified about the mounting farm debts and farmer suicides. Why the food producers are killing themselves? The only answer Sitharaman could come up with is “market linkage” and infrastructure development. However, the past experience has shown that all such acts of rural infrastructure development end up serving the interests of the feudal landlords, usurers and hoarders, leaving the farmers in astray.

At the time of rural distress and due to a steep rise in unemployment throughout India, the dependence on the largest rural employment generator Mahatma Gandhi National Rural Employment Guarantee Act (MNREGA) has increased manifold. Though the former finance minister Arun Jaitley allocated Rs 550 billion for the scheme in the Union Budget for FY 2018-19, with a promise to increase the funding if required, when the Union Rural Development Ministry had sought an additional Rs 180 billion from the finance ministry in January 2019, only Rs 60 billion was released, leading to a liability for the scheme.

Disregarding the high demand for funding in this scheme, which is a demand-driven welfare programme, Sitharaman only allocated Rs 600 billion to meet the expenses of the MNREGA in the FY 2019-20. If we consider Rs 120 billion overdue for the last FY, then the actual allocation is Rs 480 billion, which is Rs 70 billion less than what was allocated by Jaitley!

In FY 2018-19, the MNREGA created 2.55 billion person-days of work, which is its highest since 2005, when the scheme was launched by the previous government. The highest job seeking happened due to the bad monsoon, rising unemployment and large-scale rural distress that’s caused by the vicious cycle of debts. Modi’s eagerness to destroy this scheme is visible from the record low allocation for the scheme in FY 2019-20. As deficient in rainfall will create rural distress this year as well, a large number of families out of the 100 million who hold MNREGA job cards, will demand employment under the scheme. The shortage of funds will create a ripple effect in the rural economy and trouble the already burdened farmers to a greater extent.

Despite all the tall talks of developing rural India and empowering the farmers, the Union Budget 2019-20 is sheer hogwash and a hollow budget with no real agenda to support the distressed farmers and the agriculture sector. The PM-Kisan Yojana’s Rs 6,000 support per family per year, which boils down to less than Rs 20 or $0.29 per day, is too less to create any significant demand at the grassroots to push up demand. This bubble will burst soon, as neither the state exchequer will be able to pay for both farmers’ pension and the direct transfers for long, nor the ruling classes, especially the foreign monopoly-finance capital and their Indian comprador lackeys, will allow the government to transfer money to the farmers’ rather than bailing their businesses out of crisis.

Even the bubble of “double income for farmers by 2022” will burst like a Ponzi scheme quite soon, as there is no credible plan to reach that goal. In a nutshell, the entire budget has been hollow, disarrayed and a docile tool of the Modi regime to hoodwink the gullible farmers. Once the bubble will burst, the grotesque reality will replace the rosy picture that the Modi regime has painted, and that will not become good political optics for the Modi regime or the BJP. The farmers’ rage always inflicts a fatal blow to the tyrant and sclerotic regimes. Under no circumstances can a pro-imperialist, pro-feudal and fascist BJP or the Modi regime add any real value to the lives of the farmers. Hence, for the Modi regime, each of its lies, propaganda and other attempts to captivate the voters will backfire in the long run and an angry, agitated and unrelenting force of farmers will unhorse the emperor overlooking the bruises on their own bodies.