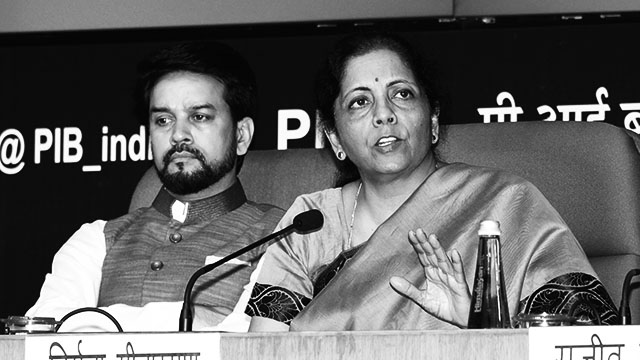 India’s most amusing finance minister and Bharatiya Janata Party’s (BJP) gem economist Nirmala Sitharaman is back again with a basketful of laughter dose that would make people laugh at the worst hour of the dilapidated economy and keep their hearts healthy.

Sitharaman returned on 14 September 2019 to do a press conference and announce some of the key measures Prime Minister Narendra Modi’s government is going to take to revive the crisis-ridden real estate sector and the export-based industries.

It really generated a lot of interest among the stakeholders, as industry leaders, experts and even bankers fixed their sight on their television screens trying to decipher what Sitharaman has in her bag this time.

The finance minister didn’t appear like a miser, rather a liberal generous donor to the cause of capitalism, which is in a bottle-neck crisis right now. Why she shouldn’t be that when she already has Rs 1.76 trillion taken from the Reserve Bank of India (RBI) a few weeks ago?

Though in the beginning, apparently, she didn’t know where the fund will go, now it seems her department is allowed a pie out of it by Modi and his cohorts. She announced Rs 700 billion-worth package for crisis-ridden capitalists who would be helped to revive their business from the people’s hard-earned money.

Still, there is a catch! One would get a Nobel Prize in economics if they can find out exactly how her decisions are going to help the crisis-ridden sectors and what’s exactly the amount to be spent and by what time.

Sitharaman said that the government will open a special window to provide last-mile funding to crisis-ridden housing projects, provided that they aren’t enmeshed in bankruptcy proceedings.

There will be a Rs 200 billion-worth corpus fund set up for this purpose, which will be managed by experts. The government will provide 50% of the amount, ie, Rs 100 billion, while the rest will be pooled in from investors.

No clarification is provided on why would investors fund the crisis-ridden sector where the volatility is so high and where even big names are getting entangled in severe financial crisis, resulting in bankruptcy?

In case a project is stuck because of fund crunch and the project’s developer failed three or more monthly instalments to the lending bank, then the project will be classified as a non-performing asset (NPA) by the lender.

According to the RBI’s NPA guidelines, the lender will then start a process against the defaulter and that will entrap the project developer in legal proceedings. In such cases, such projects will not be eligible for the last-mile funding.

Then who will benefit from the corpus?

According to industry experts and bankers, even a corpus of Rs 200 billion is quite a small amount to meet the huge deficit faced by thousands of projects stalled in top metros, tier II and tier III cities.

How can they get a rejig from this Rs 200 billion? There is also no guarantee that the corpus will immediately receive investors, as it’s a period of scepticism in the finance market and there is a huge trust deficit in the market. No one would even trust the government with Sitharaman as the finance minister.

Relaxations in the external commercial borrowing (ECB) will be provided to the housing finance companies to borrow funds from abroad. At a time when the whole world is gripped in a major financial crisis, it’s unlikely that a sector like real estate will be able to get much through the ECB route. The foreign creditors will not be eager to push their fund to a volatile market where the Indian lenders have already burned their fingers.

What is the alternative? Can Sitharaman ask the RBI to lower lending rates? Can she ask the government lenders, the public sector banks (PSB), to lend more to the real estate sector? Can housing loans to the end buyers, the first-time buyers be offered at lower interest rates to ensure a hike in demand for at least the finished projects or those at the verge of completion? How is the government going to help the buyers whose money is stuck in the projects that are undergoing bankruptcy proceedings? How would the National Companies Law Tribunal help the buyers recover their money?

These are questions for which neither Sitharaman nor her department can provide answers. The situation is gloomy and all they can do is resort to histrionics to captivate people’s imagination and hoodwink market stakeholders.

It becomes clear that the government’s press meet and declarations are mere regular hogwash exercise if one would look into the export sector announcements by Sitharaman.

The finance minister announced a scheme called the Remission of Duties or Taxes on Export Product (RoDTEP), which will come into effect from January 2020. As the China-US trade war is already causing severe turbulence in the export sector, the timeline itself is quite problematic.

Under this RoDTEP scheme, the government, which is already paying refunds to the tune of Rs 400 – Rs 450 billion annually, will forego Rs 500 billion worth revenue to provide remission of duties and taxes to exporters.

There is a general fear that the crony-comprador capitalists like the Adani Enterprises, closely associated with the Modi regime, will use the route to do money laundering and cheat the government. There had been earlier instances like this in which the Adani Enterprises was found complicit but remained immune, thanks to the largesse extended by it to the Modi regime and the BJP.

She also announced a Rs 170 billion-worth annual dole, which will allow Export Credit Guarantee Corporation to offer higher insurance cover to those banks that provide working capital to export firms. According to her, this will significantly enable a reduction in the overall export credit cost, including the interest, which often becomes a burden for small and medium enterprises.

The hitherto sanctioned PSL limit of domestic banks for export credit was up to Rs 250m per borrower to units having a turnover of up to Rs 1 billion, according to the RBI’s Master Direction – Priority Sector Lending – Targets and Classification (updated as on December 4, 2018).

If additional Rs 360 billion to Rs 680 billion needs to be infused to revive this sector then how the funding will be arranged is not made clear by the finance minister.

In a surprising manner, Sitharaman also announced that her department will organise mega shopping fairs, like Dubai, to showcase the industries like gems and jewellery, handicraft, yoga, tourism, textiles and leather.

However, how would that generate demand in an economy where people lack disposable income and the crucial sectors, especially the automobile sector, is lurching, with an imminent massive lay-off hanging like the Sword of Damocles on 3.5m workers, which will eventually affect the entire economy, wasn’t clarified by her.

Why fairs and shopping festivals can’t help the economy at the hour of grave crisis, when demand is at a historic low for even Rs 5-worth Parle G biscuit, is a problem for which one won’t need a second thought to arrive at the answer. Yet, the so-called economist finance minister is determined to turn herself and her department into a laughing stock by flogging the dead horse.

Indian economy can’t get rid of the structural crisis through cosmetic surgeries that Sitharaman prefers. The structural problem can be periodically paused by demand creation at the grassroots but it can’t be resolved.

The only resolution to this crisis remains in the structural and revolutionary change in the socio-economic system and the establishment of a socialist society where the means of production will be owned by the society and the driving force of the economy will not be the market but people’s welfare.

A hardcore Hindutva fascist government, like Modi’s, can’t even think near that point and hence, the Indian economy will keep suffering for a long time to come, unless the people take the initiative to change the system altogether for a better and secure future.