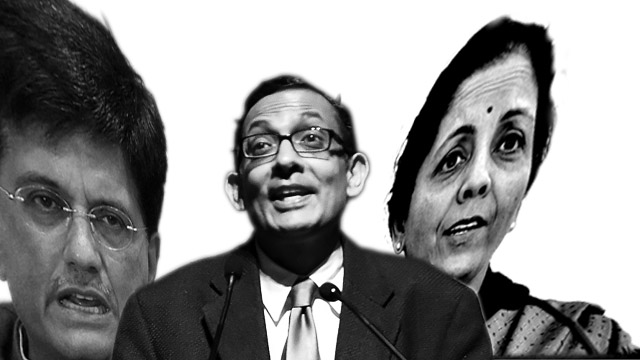 Goyal called Banerjee a “left-leaning” economist and claimed that India has rejected Banerjee’s economic proposal — the Nyuntam Aay Yojana (NYAY) or the universal basic income (UBI) scheme — by not voting the Congress party. This castigation shows how Modi’s cohorts, laced with self-assuring hubris and driven by an ill-gotten sense of entitlement, suffer from insecurity.

This visceral hatred for Banerjee, who is neither “left-leaning” nor an economist seeking Indian people’s endorsement for his opinion, comes from the saffron camp’s parochialist template. The BJP politicians like Goyal or Sitharaman, who have lived in this eco-system, can’t help but despise any idea or theory that contradicts theirs.

GDP calculation is done using a new computing methodology adopted by the Modi regime to magnify its economic achievements vis-a-vis the Dr Singh-led years. The Q1 growth could be below 4.5% if computed according to the previous methodology. There has been no other government in India that has forged data like the Modi regime. This pathetic attempt to paint a rosy picture using forged data, when the economy is at tatters, isn’t going to help the BJP any more as the demand-side crisis has reached its peak in FY 2019-20 and it will be impossible to evade the issue by adopting supply-side measures.

The present economic crisis isn’t a recession, which happens technically when for two consecutive quarters the economy goes into negative growth. Rather, the crisis is a demand-side crisis and is triggered by the disastrous economic blunders like demonetisation of November 2016 and Goods and Services Tax (GST) of July 2017. The unemployment that these two measures created, affected demand severely. On one hand, India’s unemployment rate reached 45-years-high in 2019, while on the other hand, the government took no affirmative steps to improve the demand-side economy.

More unemployment led to further fall in demand, as not only the unemployed people lack money to spend, even those who are employed, got conservative about spending the money and became conscious of their choices so that they can save more money for exigencies. This negative feeling about the state of the economy caused a further fall of demand, especially of automobiles, consumer goods, fast-moving consumer goods, textile, real estate, etc. This led to far more lay-offs, adding more people to the number of unemployed and thereby, demand continued to decline.

According to the Centre for Monitoring Indian Economy (CMIE), the unemployment rate in October rose to 8.1%, and both urban and rural unemployment rates are in a pernicious stage. The CMIE data shows that employment opportunities are shrinking fast. From 41.6% in September employment rate fell to 40.7% in the first two weeks of October, which is the same as the average of the preceding three months.

Despite a spike in September due to Kharif sowing season, the employment rate receded in October. Even though few industries will do fairly better than the rest of the year during autumn due to a lot of Hindu festivals, it’s expected that they will continue to face the slump in demand from December 2019 onwards, unless the employment situation improves.

This is a classic case of a microeconomic demand issue, which any serious undergraduate student can solve. Sitharaman, being a doctorate in economics, is either clueless, as one can surmise from her actions, or is intentionally aggravating the crisis. The only solution right now to this economic crisis within the current setup is to increase demand by providing people with employment opportunities or a basic income support. It’s only the state that can play a pivotal role here and not the private sector, as it will not risk investing in a gloomy market situation.

Rather than playing the pivotal role in providing income opportunity to the people by either taxing the rich or by increasing revenue from the non-traditional sources, like withdrawing tax holidays and exemptions to big corporations, Sitharaman is trying to fix the supply-side of the economy. How can the merger of public sector banks help falling demand? How can tax exemption to corporate houses or withdrawal of wealth tax help in generating demand that’s caused due to unavailability of money in the hands of the poor? How can providing more capital to the banks help generate income, when the corporate houses aren’t eager to take new credit due to the volatile situation of the market?

She withdrew the wealth taxes, allowed tax cuts to the rich and those who will set up manufacturing units in India in a few years. While there are negative perceptions about the sustainability of existing businesses in the market, as they are unable to sell their goods and services due to falling demand, how can the government lure corporate houses to invest in new projects in such a situation? Even zero-interest loans won’t increase setting up of new enterprises or increase employment opportunities. The only resort for the government will be to return back to the realm of data forgery and claim that either the MUDRA scheme has provided self-employment opportunities to millions or that people are not willing to work and, therefore, they are outside the job market.

The Modi regime’s initiatives are targeted at enriching the rich, as neither corporate tax exemption nor wealth tax exemption will bring the extra money into the market to create employment opportunities. Rather, viewing a very unstable market situation, the investors will park their money in such bubbles that promise a higher return. So, while stock trading will increase, due to the speculative fetish of capital, domestic and foreign, employment-generating initiatives will continue to experience a free fall. It means rich will become richer, while the poor, the majority of Indian people, including 194m of starving people, will suffer.

Sitharaman claims that the 3.3% fiscal deficit target she had fixed is “non-negotiable”. Such ambitious claim sounds outlandish when large-scale tax exemptions to the rich and corporate houses will cause a straight loss of Rs 1.46 trillion to the Indian exchequer, especially, at a time when the GST collection has fallen to the sub-1-trillion zone. It will widen the fiscal deficit by a few percentage points at least, if not by some per cent. How this gap will be filled has not been clarified by the finance minister or her ministry.

In case, without showing generosity to the corporate houses, Sitharaman would have increased the allocation for the Mahatma Gandhi National Rural Employment Guarantee Act from 0.2% of the GDP to 0.6%, it would have provided a better opportunity for the rural poor to earn some money and, thereby, boost demand for goods and services. Increased demand would’ve boosted the economy by providing more jobs and subsequent disposable income. Rather, the Modi regime thought about investing the money in fuelling the growth of the rich and the richest-of-the-rich.

Goyal has all rights to criticise the economists like Sen or Banerjee; similarly, Sitharaman, who ignored Dr Singh’s suggestion that the Modi regime must stop blaming its predecessor in its sixth year and acknowledge that a problem exists to resolve it, can continue to boast that India is one of the “fastest-growing economies” sitting in Washington DC, however, it won’t change the fact that the entire government is either deliberately accelerating the economic crisis or it’s run by dimwits with no idea about how an economy works.

Banerjee’s method of “randomized controlled trials” aren’t left-wing economism. However, one of his approach regarding India, the NYAY scheme, had the possibility to reverse the slowdown by demand creation and also enable people to take risks as they would know there is something to fall back to. He even denied that his UBI was exclusively designed for the Congress party, but across the ideological spectrum, he could’ve shared it with anyone who would’ve asked for it.

The Congress party asked for it, the BJP didn’t. Thus, the Congress was the first to propose the UBI of Rs 72,000 per annum in the 2019 Lok Sabha election taking a cue from Banerjee, however, the BJP’s manoeuvre by promoting Modi’s Rs 6,000 per farmer family an annum in three instalments stole the show with a promise of mere 1/12th of the NYAY’s amount to a smaller group of beneficiaries. The loss of the Congress party doesn’t mean that the concept of a UBI, which the state will provide, is actually thumbed down by the very people who are suffering due to the lack of it.

The people of India could have had voted for or against the UBI if there were concrete understanding and experience of the same. The votes that the BJP and its allies got from 250m voters, wasn’t over its economic promises but for its mainstreaming of bigotry as a ruling party and its ability to communally polarise the majority Hindu community using xenophobia. The economic policies didn’t cut ice in the political battle and that can’t be Banerjee’s fault.

Yet, driven by their audacity, and hubris, Goyal can fire a salvo at Banerjee or Sitharaman can negate Dr Singh, however, it won’t change the fact that their disastrous economic mismanagement has brought the Indian economy to its knees and ruined millions of lives, ended numerous possibilities and continues to prevent millions from living a bare minimum life with a square meal a day. The Congress party’s NYAY may have lost the election in 2019, but India has lost the economy and whatever was left of it, under Modi’s rule.