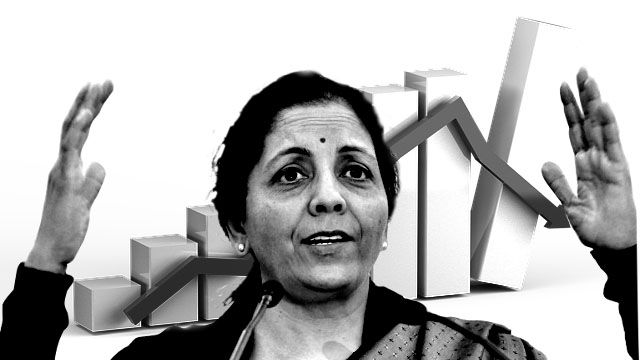 India’s GDP nosedived for the second quarter (Q2) of the financial year (FY) 2019-20, as anticipated by most economists, to a 26-quarter-low 4.5%. The data released by the Bharatiya Janata Party (BJP) government confirmed the much-anticipated dismal performance, as Prime Minister Narendra Modi completed his first 180 days of the second innings in office.

The lowest GDP recorded in the recent past was 4.3% during Q4 of FY 2012-13, under Dr Manmohan Singh-led United Progressive Alliance (UPA) government. Earlier, India’s GDP growth fell to 5% for the Q1 of FY 2019-20 and it sent a shiver down the spine of all industries and economists, ringing an eerie alarm about the worsening of the crisis throughout FY 2019-20, which the Modi regime and BJP stalwarts ignored conveniently.

A historically-low consumer demand caused by rising unemployment due to subsequent disastrous policies of the Modi regime like the demonetisation exercise and the roll-out of the Goods & Services Tax (GST) actually played the catalyst role in making the economic crisis grow to a gargantuan scale and India’s GDP growth to fall. The demonetisation drive of November-December 2016 threw the economy off the track and caused immense trouble for the unorganised sector that employs 90% of Indian working class. The GST was a severe blow on the micro and small-scale industries, who suffered enormously as the tax terrorism hit them.

The closure of numerous businesses due to the demonetisation and GST rollout not only created unemployment on a large scale, but it also triggered reverse migration to rural India when there were no employment opportunities in the villages. The Modi regime reduced budget allocations for schemes like Mahatma Gandhi National Rural Employment Guarantee Act, which earlier helped rural poor with employment for 100 days per annum. The lack of employment opportunities in rural India, coupled with reverse migration brought down rural demand for goods and services from FY 2017-18 onwards.

The massive unemployment actually fuelled a steep decline in consumer demand in rural India and a lack of social security measures forced the poor to restrict their choices. This shockwave soon affected the urban areas as lower rural demand hit industry productions in cities, causing layoffs and adding to the pool of unemployed people.

With a 45-year-high unemployment rate, the Modi regime is least interested in reviving public sector undertakings (PSU) to provide employment to the unemployed. It’s rather eager to sell PSUs to the big corporate houses that fund the BJP and axe the workers. Air India, Bharat Sanchar Nigam Limited, Bharat Petroleum Corporation Limited, etc, are on sale at a time when the government should’ve used the PSUs to hire more hands and provide a stable income to many. Even the largest PSU like Indian Railways is getting privatised and thousands of its employees look forward to a gloomy future.

This uncertainty, the lack of jobs leaving people with less money for consumption, backed by a severe credit crisis as banks and financial institutions are left shattered by corporate loot and plunder, are combinedly fuelling the massive contraction of industry and slow growth across sectors. The industry data released by the Modi regime is actually frightening for many.

Production of coal dropped by 17.6%, cement by -7.7%, steel by -1.6%, electricity by -12.4%, showing an alarming trend with a severe repercussion on the economy. The contraction in these industries shows the contraction in demand from other industries, which depict the sheer lack of demand for goods in the market. The only reason for this is the lack of dispensable income in the hands of the people, which the Modi regime and the BJP are not providing at any scenario.

Agriculture, which employs 43.2% of Indians, grew slightly vis-a-vis Q1 of 2019-20. While it was 2.04% in the Q1, in Q2 it slightly grew to 2.08%. The 0.04 percentage point growth in agriculture, the only sector that can provide massive employment to people, is not only worrying but actually a signal of a forthcoming disaster. If the agriculture sector is left at the mercy of corporate generosity by the government, as the unemployment crisis is presently left, then it will definitely pose a serious threat to India’s food security in the days to come and will impact India’s GDP growth as well.

The service sector, which contributes more than 50% of India’s GDP, experienced only 6.81% growth, out of which only government sectors grew by 11.61% due to public spending in defence, etc. This growth in the government sector can be attributed also to Rs 1.45 trillion tax sops to corporate houses offered by Finance Minister Nirmala Sitharaman. None of these spendings helped to create income opportunities for the poor, rather mostly went to enrich corporate houses.

The Modi regime surprisingly kept the spending limited to the supply-side fixing, when the experts, including the Sangh Parivar’s gadfly Subramanian Swamy, have been advocating for demand-side improvement to accelerate India’s GDP, even without jobs. This corporate appeasement policy of the Modi regime has got a severe impact on the India’s GDP and economy. The fiscal deficit of the government has hit 102% as it reached Rs 7.2 trillion in Q2 FY 2019-20. The deficit is 103.9% vis-a-vis budget estimate of 2018-19. The government is now clueless about meeting its fiscal deficit target for FY 2019-20.

The government targeted to keep the fiscal deficit locked at 3.3% or Rs 7.2 trillion. Revenue receipts of the Modi regime stood at Rs 9.07 trillion at the end of October. The total expenditure of the government for the FY 2019-20 is pegged at Rs 27.86 trillion, while the total receipts are pegged at Rs 19.62 trillion. As the expenditures of the government, especially in corporate appeasement drives, go to such an extreme extent, it’s planning to fill the gap by pushing divestment of PSUs and by taking more loans. This will eventually put more pressure on the economy and drive the country towards total devastation.

While Sitharaman lives with a vehement denial of the fact that the economy is really in a coma, the private final consumption expenditure (PFCE) is showing a nosedive, exposing her hollow advocacy. The PFCE growth in the Q2 of FY 2019-20 is 5% vis-a-vis 9.7% during Q2 of FY 2018-19. The PFCE also fell to 3.1% during Q1 of FY 2019-20 vis-a-vis 7.3% of Q1 FY 2018-19. As private consumption growth falls it clearly indicates that the demand in the market for products and services are falling considerably. If the PFCE growth is not clocked at a higher pace, this will mean the situation is not improving at all, despite the so-called “measures” by Sitharaman, which she boasts upon.

In this case, the ripple effect will impact the industries far more in Q4 of 2019-20, as they will face stagnation and contraction after doing some business in the Q3 due to the festive season in most parts of India. Former finance minister P Chidambaram warned that the Q3 growth of India’s GDP could be worse, despite the festive spendings. The hubris of Sitharaman and her boss Modi, along with their propaganda over the purported agenda of turning India into a $5-trillion-economy within a few years, have refrained them from acknowledging the grave situation. Despite being updated about the facts and figures, Modi and his ministers showed that they care a lemon about the economy. This nonchalant attitude is prolonging and complicating the economy’s woes, which will have a severe impact on India’s future and stability.