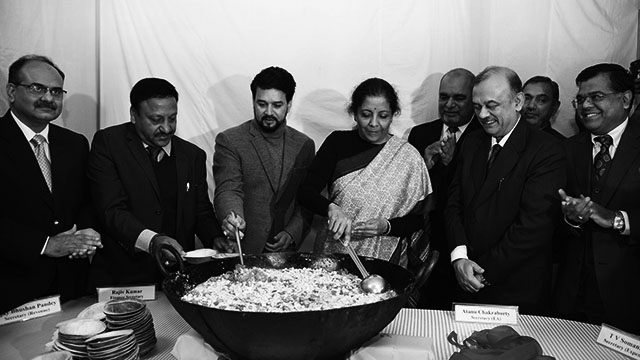 As Union Finance Minister Nirmala Sitharaman will present the Union Budget 2020-21 in just a few days, there is a lot of hullabaloo among economists, business world’s tycoons, and policy analysts over what all she will present before the Lok Sabha in her maiden full budget that can actually catapult the Indian economy from the abysmal crisis it’s currently quagmired in due to a severe slowdown caused by high unemployment and low demand. While there are apprehensions and speculations over Sitharaman’s possible measures, which will eventually protect or damage Prime Minister Narendra Modi’s rule, there are a few factors that can severely impact the Indian economy and spoil Sitharaman’s Union Budget 2020-21 speculations.

What are those external and internal factors that will have a severe impact on the Indian economy?

Firstly, Sitharaman’s Union Budget 2020-21 can’t oversee the problem with crude oil supply and the looming threat of oil price rise. Foreign oil made up 84.5% of India’s needs in six months to September 2019, up from 83.3% a year earlier. At the same time, imported gas accounted for 51.2% of local needs. As per this report, every US$1 rise in crude oil prices increases India’s import bill by about US$1.5 billion. This always adds to a huge trade deficit, putting the country’s foreign reserves to a stressful situation.

Though the initial tension between Iran and the US over the latter’s assassination of a top-ranking Iranian general in Iraq has subsided now, the volatility that’s reigning over the gulf region isn’t over. There is a chance that the oil prices may increase in India due to rise in the international crude oil price, even though India has cut the oil imports from Iran under the US’s pressure and is now depending mostly on the Saudi Arabia and its allies, along with the US.

The Economic Survey 2017-18 had estimated that every $10 per barrel increase in the price of oil reduces economic growth by 0.2-0.3 percentage points. The volatility caused by the US-Iran tension in the gulf will definitely keep the oil market in a volatile state and there are predictions that oil prices may go up from March or April 2020 onwards. In financial year (FY) 2018-19, without any military tension, India’s oil import bill rose by US$ 32.3 billion. In the October-December quarter (Q3) the Brent variety crude price remained 18% higher, which will have an immense toll on India’s balance of payment and add to inflation.

Knowing well that the oil prices are directly linked with inflation, especially consumer food inflation, and that it will fuel inflation, which reached 7.35% in the month of December 2019, causing trouble to the working class, peasantry and low-income groups, what measures Sitharaman’s Union Budget 2020-21 will propose to arrest the volatility of oil prices and the spiralling inflation is to be seen. However, past trends show that the Modi regime will silently pass the buck to the people’s shoulders, excusing itself from playing any affirmative role at a time when India’s unemployment is four-decade-high.

Secondly, due to US President Donald Trump’s conflict with the World Trade Organization (WTO), there is an appointment blockade in the appellate body – the topmost dispute resolution body – of the organisation, rendering it a dysfunctional body, incapable of handling the trade disputes. It’s in the news that Trump will close a deal with WTO head Roberto Azevedo that will significantly alter the nature of global trade causing immense problems for countries like China and India, whom Trump accused of using the “developing nation” status of the WTO unfairly.

If the WTO rules are changed to the disadvantage of India, then it will add further stress to the already skewed current account balance, as India has experienced a gradual fall in merchandise export in the recent period. The non-oil export growth decelerated from 9.2% in FY 2017-18 to 7.1% in FY 2018-19. India already lost an export incentive case filed by the US at the WTO in November 2019. The worse case situation will definitely give a jolt to the already sickening economy and Sitharaman’s Union Budget 2020-21 won’t be in a position to deal with it.

Thirdly, the US-China Trade War will have a severe impact on the Indian economy throughout FY 2020-21. There is no sign of an amicable solution to the issue under the present Republican dispensation and it can’t be assured that Trump will lose the presidential polls scheduled in November 2020. The unrealistic burden imposed by the US on China to resolve the impasse will sooner or later force the Chinese to not fulfil one or many promises, which will aggravate the tension. Moreover, with Brexit happening this year, it’s unlikely that the global trade and manufacturing will pick up momentum, rather the slowdown will continue to engulf more sectors.

In such a precarious situation, any hope of India’s exports, especially in manufacturing, merchandising, etc, picking up will be a utopian thought. Even retaining the base will be a problem as the crisis of the European Union will impact the trade and commerce on a global scale. In such a situation, India’s economy will sink further, without a scope of automatic recovery. Can Sitharaman’s Union Budget 2020-21 effectively deal with these external factors? Can the government see eye-to-eye with the US at the international forums and not budge to its pressure, which it did in the case of Iran? Such wishes will be too much from a regime that aims to mortgage the country, its resources and labour to the foreign monopoly-finance capital in return for crumbs. What waits under this indifferent regime is nothing but sheer distress.