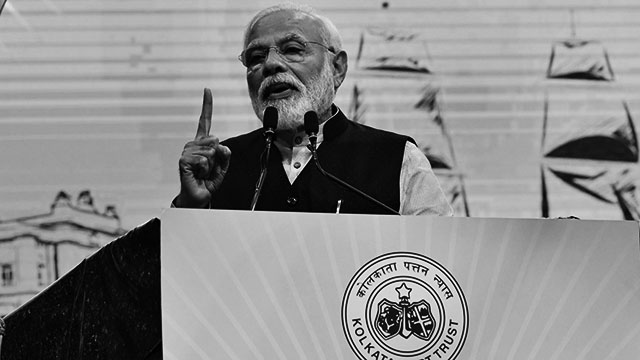 With spring comes the season of biggest stock-clearance sale. Customers flock to get their hands on whatever fits their budget. The same selling spree is visible in Prime Minister Narendra Modi’s agenda as his regime is putting on sale the Central Public Sector Enterprises (CPSEs). Despite a strong workers’ movement against disinvestment in major public sector undertakings (PSUs), the Modi regime’s privatisation drive isn’t showing signs of halting anytime soon.

In the latest Union Budget 2020-21, Finance Minister Nirmala Sitharaman declared that the Modi regime will put PSU insurance giant Life Insurance Corporation of India (LIC) and the Industrial Development Bank of India (IDBI) on disinvestment track. Now, there are even talks of selling 5% government stake in CPSE steel giant Steel Authority of India Ltd (SAIL). Sitharaman has, purportedly, mooted the idea to conduct roadshows in Hong Kong and Singapore to lure foreign corporate buyers for the initial public offerings of SAIL.

Apart from LIC, IDBI and SAIL, the Modi regime’s privatisation drive aims at selling PSUs like the Indian Railways, Bharat Petroleum Corporation Ltd (BPCL), the Air India, Bharat Sanchar Nigam Ltd (BSNL), etc, in the coming months. In the financial year (FY) 2019-20, the Modi regime aimed at earning Rs 650 billion through selling CPSE stakes. So far the government has mopped Rs 340 billion through the disinvestment route and the remaining Rs 310 billion must come by the end of March 2020. The sale of Air India will leave India without a national carrier, while the BSNL and BPCL sale can seriously threaten national security in the days to come.

By selling 5% of SAIL’s stakes the Modi regime will be able to raise Rs 10 billion. The rest of the amount will be fetched through the disinvestment of other CPSEs. The other companies in the line are Shipping Corporation of India (SCI), Container Corporation of India (CONCOR), North Eastern Electric Power Corporation Limited (NEEPCO) and Tehri Hydro Development Corporation India Limited (THDC). For the FY 2020-21, the Modi regime has set the disinvestment target at Rs 1.20 trillion, which will put many more public sector units on sale.

Though initially after the current disinvestment drive, the Modi regime will still control majority stakes in SAIL and LIC, in most of the other CPSEs it will fall below the mandatory 51% threshold.  The government is mooting the idea of controlling the management of the companies post divestment to call them CPSEs, though its shareholding will be considerably low. The Modi regime’s privatisation drive aims to sell the family silver to meet the domestic expenses of the government and the balance of payment (BoP). This compulsion of selling PSUs to meet revenue deficit, which was stretched to 3.8% in the current fiscal from the target of 3.3%, shows that the economy is in serious trouble. The foreign debts of India are also on the rise, as external borrowing has helped the government to pay for several of its expenses.

With this so-called strategic disinvestment programme, there will be a big question mark looming over the future of the employees and workers, including temporary and contractual workers, of these CPSEs. BSNL and Air India are already trying to axe as many possible. Others will follow the suit as well. The cash-rich SAIL and LIC won’t spare heads too.

Whenever the government, be it Modi’s or his predecessors, wants to sell PSUs built with public money, it cites the inefficiency, bureaucratic management, the purported low productivity of the workforce, the losses and liabilities as its reasons. The government never takes blame for the mismanagement and bureaucratic inefficiency in running the PSUs and it never acknowledges the fact that it’s not the job of the government to earn profit from the PSUs, rather, their function is to serve the society at large, propel economic growth, maintain stability, especially price stability in the markets, ensure an environment of social justice and help in equal distribution of wealth to benefit even the last person in the line. If a PSU isn’t performing these tasks then it’s solely the government’s failure.

Why Modi’s decision to privatise PSUs like the Indian Railways, Air India, BSNL, BPCL, LIC, SAIL, etc, will add excessive burden on the Indian economy than providing any relief through the extra cash in the government’s coffer? Selling PSUs to meet BoP and monthly expenses is like selling family assets or agricultural land to repay debts and meet monthly household expenses. The money won’t be used for any capital expenditure, but for other expenses, probably to pay wages and debts, which won’t create any valuable assets for the country or create employment opportunities. This is opposite to what PSUs do in a mixed economy like India.

Modi’s privatisation drive will neither benefit the Indian people nor uplift the economy from its abysmal crisis. Rather, the privatisation of major CPSEs will help the major corporate donors of the BJP to gain immense control over the Indian economy. It will also privatise the large scathe of land owned by these PSUs throughout India and the corporate entities, who will not repay the debts of these PSUs, will definitely enjoy their control over the land and natural resources. This greed to grab the public resources, built with people’s money, is driving the entire bandwagon of neo-liberal economy’s advocates and their PR agents to carry out large-scale propaganda on behalf of “reforms”. Modi is enjoying immense financial backing from the big corporate entities, from the Reliance Industries to the Adani Enterprises because he is unapologetically serving the agenda of these groups at the cost of people’s agony.

While CPSEs employed 1.1m people (excluding contractual and temporary workers) as on 31 March 2017, the number dropped to 1.08m people as on 31 March 2018. In just one year, 43,000 people lost their jobs and this happened due to the ongoing onslaught on the organised labour force by the Modi regime’s privatisation drive. This job loss is also fuelled by the closure of many PSUs. By 31 March 2020, the biggest shockers will come as more people will be out of jobs from Indian Railways, Air India, BSNL, SCI, CONCOR, NEEPCO, THDC, etc. In recent years, the hirings by the PSUs have been abysmally low, and this lack of jobs at a time when an unprecedented unemployment crisis is intensifying the overall economic crisis.

One must look beyond the pro-market advocacy done by the corporate-controlled mainstream press, often with concocted tales and data, in order to understand the necessity of the PSUs’ domination over the market forces in an economy like India, which didn’t grow organically. PSUs were set up to serve the broad macro-economic objectives of attaining higher economic growth, long-term equilibrium in the BoPs and low and stable prices besides meeting certain socio-economic obligations. There were only five CPSEs with a total investment of Rs 290 million at the time of the First Five Year Plan, there were 339 CPSEs — 257 operational — with a total investment of Rs 13.73 trillion as on 31st March 2018.

While the economy of India is slopping down the annals of an abysmal crisis, Modi regime’s privatisation drive, with SAIL, LIC, Air India, Indian Railways, etc, is going against the common sense of economics.

At a time when unemployment is at 45-year-high, the PSUs could be used to generate employment, especially for the socio-economically marginalised sectors, which would create demand and thereby boost economic activities. The Modi regime’s privatisation drive will not just throw the economy to the dogs, it will also jeopardise India’s national security. The unemployment crisis could’ve been tackled better with increased spending by the PSUs and filling of their vacant positions, which would’ve generated demand at the grassroots and helped to stimulate the economy from the nadir.