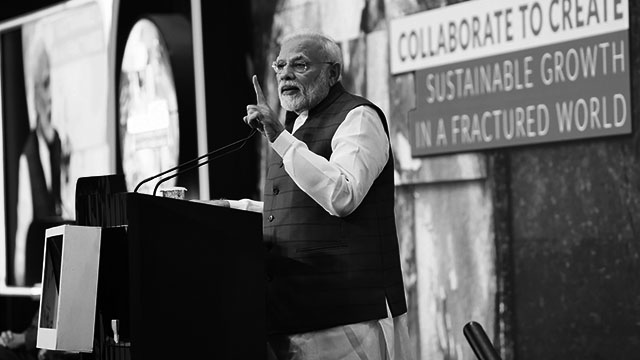 Speaking at the Global Business Summit at New Delhi on Friday, Prime Minister Narendra Modi made some ridiculous claims which except his sycophants, toady scribes and a bunch of parasite capitalists, no one can believe. He claimed that the Indian economy’s fundamentals are strong citing a 16% increase in foreign direct investment (FDI) in 2019. “Fundamentals of Indian economy are strong and our policies are clear. India got $48 billion FDI in 2019, over 16% growth, 53% more private equity, venture capital investment at $19 billion,” Modi said.

This assertion by Modi is unrealistic. Though Modi’s Bharatiya Janata Party (BJP) leaders are infamous for using rhetoric to counter logic or submerge critical questions, the problem of the economy cannot be simply hushed by peddling rhetoric. On earlier occasions too, citing growing FDI, the BJP’s top leadership tried to dismiss concerns over the worst economic crisis that has unfolded in India. But how can FDI be a parameter to gauge the stability of an economy?

The Indian GDP growth rate is falling since the last many quarters after Modi’s demonetisation exercise in November-December 2016. In the third quarter (Q3) of the current financial year (FY) 2019-20, the GDP growth rate fell to 4.7%, the lowest in 11 years. This calculation was done according to the new methodology that the Modi regime introduced to increase numbers of its era vis-a-vis the Congress party-led United Progressive Alliance (UPA) era. The formula didn’t work, as the GDP plummeted below the UPA-era benchmark.

Ironically, Modi took potshots at the UPA era, in his signature style and said that the Indian economy became the fifth largest one in the world under him while it was the 11th under the UPA. Now such assertions are always faulty because the growth of the economy’s size is not a parameter to gauge its strength. Even with a size of $2.94 trillion and aiming to be a $5 trillion economy by 2024-25, the Indian economy isn’t an inclusive one and its growth is actually the growth of a few and not of all.

India’s current economic growth is solely relying upon the government’s spending. This spending is the lion’s share of the economy right now, however, the focus of the spending is focused on improving the supply-side, while the actual crisis is at the demand side, which is caused due to rising unemployment. With less amount of money in their hands, the people are wary of spending and thus, the demand for goods and services, including food items, automobiles, consumer goods, etc, fell drastically, which caused cut in productions and more unemployment. The government’s spending has cumulatively grown by 11.3% during the first three quarters of FY 2019-20. Even a fast falling import bill, due to lack of demand and a gradual slowdown in industrial production, is helping the economy to survive without a major crash. But this is not an immunity cover and in the future the crisis can severely intensify.

Excluding the government’s spending, the GDP growth would’ve dropped to 5.2% for Q1, 4% for Q2 and 3.9% for Q3. If India’s external trade is excluded from the calculation, then the GDP growth plummets to 4.8% in Q1, 1.8% in Q2 and 2.9% in Q3. With such a growth rate, the Indian economy won’t become a $5 trillion economy, as Modi asserts. Even a $5 trillion economy will stack more wealth in the closets of the big capitalists and render the people poor.

While this is the scenario of the GDP, Modi was claiming that the country’s economy will worth $5 trillion by 2024-25. How that goal will be achieved without spinning numbers? Modi answers – through privatisation. The sole purpose of his presence in the Global Business Summit at New Delhi was to woo the big foreign corporations and their Indian allies like Mukesh Ambani’s Reliance Industries, Gautam Adani’s Adani Enterprises, the corporate houses that fill the BJP’s coffers.

How can privatisation catapult an economy that’s reeling under severe demand crisis caused by lack of money in the hands of the people due to high unemployment? Will the private sector, which has moved from labour-intensive to technology-intensive operations, rendering the working class in sheer crisis, create employment to resolve the unemployment crisis? No, it will not. Yet, Modi and the BJP keep praising capitalists as wealth creators and keep offering them huge tax sops. This is happening when private consumption and investment demand are showing unprecedented weakness.

Private consumption is at a historic low, despite being 56% of India’s GDP. The demand for investment shrank by 4.1% in Q2 and by 5.2% in Q3 on a year-upon-year basis. In such a situation what does a 16% increase in FDI means? Fall in private consumption must ring a vexing and eerie alarm in the corridors of power, but neither the Modi regime nor the RBI showed any concern. There is no concrete plan on tackling the core challenges of the economy, while Modi and the BJP peddle lies about the Indian economy’s growth.