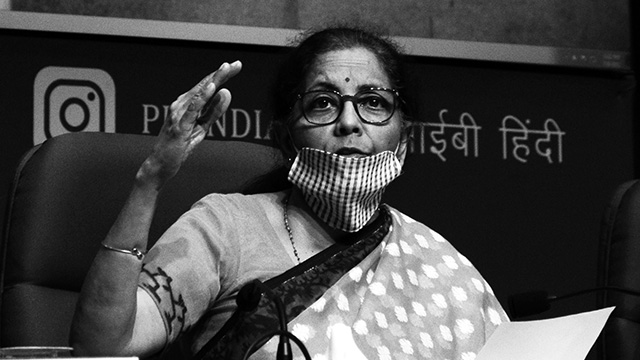 The first briefing on Prime Minister Narendra Modi’s “Atmanirbhar Bharat” (self-reliant India) by Finance Minister Nirmala Sitharaman that was held at 4pm on May 13th, remained mundane and followed the pattern that she has been following since May 2019. Sitharaman’s announcements dealt with 15 points – six for medium, small and micro enterprises (MSMEs), two for Employees’ Provident Fund (EPF), two for non-banking financial corporations (NBFCs), housing finance corporations (HFCs), microfinance institutions (MFIs), etc, one for electricity distribution companies (discoms), one for contractors, one for the real estate sector and three for taxes. The finance minister focused mostly on the MSMEs during the entire press meet.

In her first meet on the Rs 20 trillion announced by Prime Minister Modi on May 12th to build a self-reliant India, Sitharaman’s announcements regarding the crucial MSME sector skipped the crucial demands that the crisis-ridden sector has been raising since years.

Sitharaman’s announcements regarding the MSMEs show no new ray of hope but clubs together all old demands of the sector that the government remained indifferent to and emphasised more on liquidity and credit availability with a supply-side focus, without telling how the demand-side development can be done so that their business operations can run.

Two crucial demands of the MSME sector, a Goods and Services Tax amnesty scheme, and the payment of wages to their employees for the lockdown period through the Employee State Insurance fund, were blatantly ignored by the Modi regime, as Sitharaman’s announcements didn’t touch these two crucial issues.

EPF proposals are discriminatory towards the private sector employees

Sitharaman’s announcements regarding the EPF scheme can be considered quite discriminatory towards the private sector employees.

Sitharaman’s announcements on the fiscal package worth Rs 20 trillion also took into account the cases of NBFCs, HFCs and MFIs. She claimed that they are inter-linked with the MSMEs and greater liquidity in their hands will end up helping the MSMEs.

These measures won’t deal with the issue of the NPAs and the lack of demand in the market will definitely impact the business of NBFCs, HFCs and MFIs. They have been suffering for a long time and the government conveniently ignored their plight during the pre-COVID-19 period. Now under the garb of providing a stimulus, the Modi regime is announcing long-pending measures that the sectors have been demanding.

There is no information on what will happen if a discom doesn’t pass on the benefit to the customers. There is no announcement on whether the marginalised electricity users, especially the poor, the farmers, the labourers and MSMEs will get any amnesty on their existing electricity bills. Everything is left on the unscrupulous discoms.

Sitharaman’s announcements also dealt with the issues of government contractors. As part of the bigger MSME narrative, she said that the contractors working on any project of either the government or CPSEs will get an extension of six months to finish their projects without any penalty. The government agencies and the CPSEs will, as per Sitharaman, also release bank guarantees of the contractors vis-à-vis the portion of the project they have completed to ensure they have cash in their hands.

Now, this is a security deposit that the contractors pay the government agencies or CPSEs while taking up a project. This money is always refundable when the project is completed. Returning their money back to them isn’t helping them. This money won’t go back as capital expenditure. Still, this is packed within the Rs 20 trillion-worth package to fool the people.

Sitharaman announced that the real estate companies can use the force majeure clause in the contract during the COVID-19 for a period of six months. No other details were announced for them. It’s just a mere extension of their project dates by six months under the “act of God” clause. It’s not clarified how this can come under a fiscal stimulus package.

Under the taxes part, Sitharaman’s announcements dealt with three points and they didn’t provide any relief measure to the people.

All rhetoric and no real solutions visible in Sitharaman’s announcements

The entire speech of Sitharaman and her minister of state, Anurag Thakur, centred on eulogising Modi. These incessant praises heaped on Modi were subterfuge used to conceal the hollowness of his Rs 20 trillion-worth package for a “self-reliant India”. Out of Rs 20 trillion, Sitharaman declared nearly Rs 6 trillion-worth proposals. None of them can be counted as a fiscal stimulus but merely liquidity pumping initiatives. The Rs 1.73 trillion earlier allocated by her in March 2020, which consisted of the pre-existing schemes, free ration provisions and meagre cash transfer proposals, along with the Rs 6.5 trillion liquidity infused by the RBI, are considered part of the Rs 20 trillion-worth package.

The first of Sitharaman’s announcements focused on providing liquidity worth Rs 6 trillion, which means, altogether the COVID-19 package – all liquidity and no stimulus – that the Modi regime has announced so far, has a total of Rs 14.23 trillion. It leaves around Rs 5.77 trillion-worth packages to be announced. Passing of liquidity infusion as fiscal stimulus is a new way to dupe the country and the people. Unless a fiscal stimulus is announced in the next meets, worth 10% of the GDP, there can be no respite in the economic sphere.