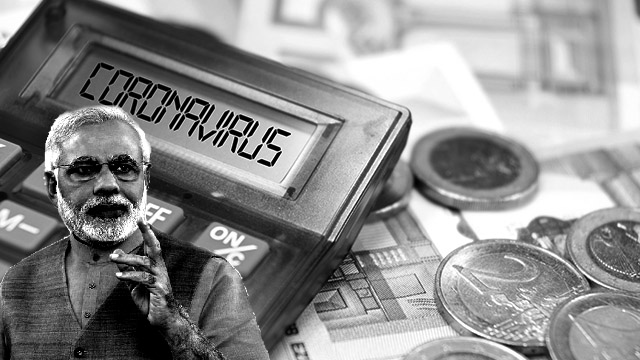 The Indian government has miserably failed to control the COVID-19 pandemic. The fourth phase lockdown ended but the rapid increase in the cases of infection has put the whole country in a state of panic. From the beginning of the lockdown we were aware of the adverse effects of the present economic crisis and even after three months, the Indian economic scenario is far from any stabilisation.

Reports by famous research firm Crisil and India’s public sector bank State Bank of India (SBI) have identified this economic crisis as the severest one in the last 40 years and it will cause a GDP slump of 5-6.8%, estimated almost Rs 70 trillion, in the financial year (FY) 2020-21 because the majority of the states had containment zones. So a huge slump in the GDP is inevitable.

Not only SBI or Crisil, most renowned financial publications like The Economic Times, Bloomberg Quint, Livemint, and others have also already flagged the present crisis as the most disastrous one in the last 20 years and it will affect the whole economy a for a longer period. Not only India, but the whole world is suffering from the same crisis. The International Monetary Fund (IMF), in their economic forecast, reckoned that the whole world is witnessing a bigger economic slump than the recession of 2007-08.

Paul Krugman, an eminent Keynesian economist, reckons this economic crisis as “a natural disaster, like a war, is a temporary event”. Robert Reich, a leftist economist, described this as a health crisis and not an economic one, and as soon as the health problem is contained the economy would snap back. There are few others who argued this as a seasonal crisis but I doggedly label this crisis as that of capitalism. They flagged this crisis as a seasonal crisis because of their limited empirical and short-time approach to understanding any economic phenomena, but if we try to understand this crisis from a heterodox perspective, we can reach its roots.

In the last 15 years, the Indian economy was capitalising all the probabilities of the present crisis. The incessant rise of the share market index although diverted people’s attention from the real scenario of the Indian economy but the real GDP growth trend was telling a different story. In the last few years, India witnessed a plunge in the growth rate of real GDP and it proves that the common Indians were witnessing a severe drop in their personal spending capacity.

So this is a clear trend that in the last two years, India capitalised all the components of an economic crisis and its unfolding was a matter of time. So the present economic crisis is not a mere seasonal economic fluctuation but an obvious outcome of the crisis-ridden capitalism.

In an economic cycle, the real GDP growth rate reckons the national economy’s health and its long time rapid fall proves that the country is suffering from an economic recession and government has no way to resolve it.

In another discussion, I looked at the rate of profitability of the Indian corporates in the last few years. The Penn World Table 9.1 provides a new series called the internal rate of return on capital (IRR) for every country in the world starting from 1950 up to 2017, and it showed that Indian corporates were struggling with their falling rate of profit.

Although many can argue that “IRR” is not the right way to analyse the falling rate of profit in the long-term basis because the calculations exclude variable capital and circulating capital. This argument has some valid points, but in the real, complex financial network of capitalism, it is impossible to find the real IRR but the figures released by the Penn World Table give us the basic idea about the condition of capitalism.

Figures in this graph clearly show that India was suffering from a low rate of return during the recession period and Prime Minister Narendra Modi’s win was nothing but a corporate-backed usurpation of power and it again proved that bourgeois democracy is nothing but a farce and functions for only a handful of the super-rich. It is not the exclusive scenario of India but the whole world, and the drastic fall in the rate of profit has become the nightmare of capitalism.

Henryk Grossman revived the theory of crisis from a Marxist perspective and showed how the rate and mass of profit affect each other. In the Indian scenario, the fall in the rate of profit affected the mass profit of Indian corporates. In Indian Marxist literature, major theoreticians always use quotes to prove their knowledge as a paragon and misplaced them in various cases but to analyse the present crisis, Grossman’s own word can do it better.

In the last few years, the rate of profit to the GDP ratio has also miserably failed to grow and it remained a serious concern for the capitalists. The falling rate of profit was not only alarming for capitalist but also for the common people because the loss of the capitalists affects the common people, albeit their profits are completely private. During 2008, rate of profit reached its peak; in Marxist terms, we can say, that it touched the “point of absolute over accumulation of capital” and it began to fall and by 2019 it faced a 15-year-low.

Drop in the rate of profitability affects investment in India. Every production sector witnessed a drop in manufacturing and low manufacturing caused severe lay-offs. Production reached its peak just before the worldwide recession of 2008 and then its fall started.

The production plunge not only caused rapid job losses but also cut short the new job growth and it directly affected the demand as the people have no money to buy necessary goods. The production crisis is the key reason behind the present demand shock.

Although there was a slump in every aspect of the economy, the stock market of India witnessed an exuberance in the share market. Profit to equity ratio (P/E ratio)was increasing at a rapid rate and reached the pick in January 2020. In my previous articles, I’ve already explained how big financial companies manipulate the share market to increase the P/E ratio. Please have a look at this and this articles if you have not yet.

The share market exuberance took place because the government provided cheap loans to corporates and in the last few years, the government and the Reserve Bank of India (RBI) have reduced the repo rates. So, now the corporates can borrow more money to invest and resume production to generate demand.

During the COVID-19 pandemic, the repo rate reached an all-time low of 4.4%. But falling rate of production showed that even the RBI reduced the interest rates but it miserably failed to grow the real production rate. Then where did the borrowed money go? The repo rate growth proved that all the capitalists invested their money in stock markets to gain more profit and they did not invest the money in expanding production at all.

Either the capitalists would hoard the borrowed money or they will reinvest it in the stock market speculations because production is not giving them desired profits. Investment to GDP shows that corporates hoard their extra profits instead of investing in the economic cycle. Modi 2.0 government has given the corporates a huge tax redemption in the Union Budget 2019 and fuelled the tendency to hoard their profit because it is no longer costlier enough. A report taken out Credit Swiss reckoned that 90% of the corporates did not contribute their profit in economic cycle but have hoarded it.

So it can be asserted that even though a long-term depression ravaged the Indian economy, it continued growing because the RBI has been pushing credit to the economy to expand this credit-fuelled economic bubble. But the lack of investment was widening the gap between fictitious capital and we witnessed a fall in the real GDP.

Even the government organisations were alarming the government. NSSO report reckoned that the mean consumption of the Indians is steadily decreasing since 2014, but the Modi regime didn’t pay heed to this or they did not have any option to save India from this crisis because capitalism was growing free from government regulation and control.

A report by Carmen Reinhart and Kenneth Rogoff of the US National Bureau of Economic Research on banking crises showed that this latest period of globalisation since the 1980s was not one of success in reducing booms and slumps, as the likes of Greenspan and other capitalist economists have argued in their interviews, but quite the reverse.

The last 25 years have seen more financial crises than ever: in emerging economies (1980s and 1990s), Asia (1997-99), Japan (1990s), US loan companies (1990s); Nordic banks (1990s) and so on, and capitalism is increasingly freeing itself from government control. So, the Modi regime had no other way to resolve the crisis as the system is actually controlled by capitalists than the government.So this production shock, in economic terms supply shock, caused a decrease in consumption capacity of the Indians and a severe demand shock hit the market.

So we can conclude that this crisis was spiralling up for a long time and the COVID-19 pandemic and the subsequent lockdown are just catalysts, and it is fruitless to attempt to understand this crisis with orthodox economic manoeuvres because any Keynesian approach won’t give us the real reason behind the crisis. The long wave of capitalism and slump in investment due to the falling rate of profit caused by supply shock followed by demand crisis and every other capitalist crisis, indeed, happens in this way.