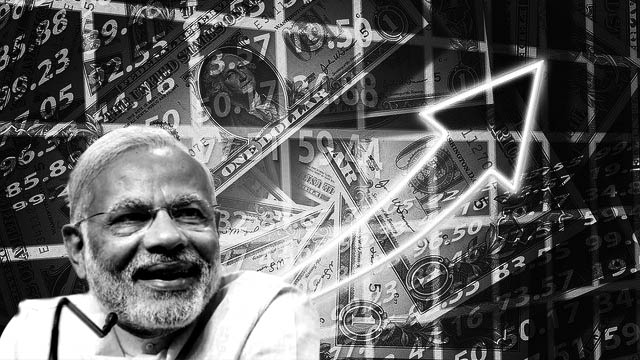 There is a news in the corporate-controlled mainstream press that’s providing Prime Minister Narendra Modi’s government with a lot of political oxygen. There is a claim that India’s foreign exchange reserves, ie, foreign currency — mostly US dollar (USD) — owned by the Reserve Bank of India (RBI), has seen a significant surge, which has crossed the half-a-trillion-dollar mark for the first time. In the week ended June 5th, the foreign exchange reserve increased by a massive $8.22 billion due to higher flow of foreign funds. India’s foreign exchange reserves have risen to $501.70 billion, which would otherwise look like a promising figure in normal times.

Apart from chest-thumping, Modi’s industrial-scale bush telegraph machinery will portray this as an unprecedented achievement by the prime minister, but an in-depth critical and objective analysis will show that this surge neither exemplifies India’s economic growth nor shows any significant results of Modi’s recently-announced “Atmanirbhar Bharat” (self-reliant India) programme. The Times of India has reported that senior finance ministry officials are applauding India’s foreign exchange reserves crossing the $500 billion mark and calling it an achievement. This is the nadir of economic nonsense!

At this point, as the COVID-19 pandemic severely impacted global trade and commerce, foreign trade has seen a drastic fall except for the import of crude oil. Due to lockdown at home and abroad, India’s exports contracted by 60.28% to $10.36 billion, while imports shrank by 58.65% to $17.12 billion in April 2020. Exports declined by 34.57% in March 2020, when the global pandemic hit the world market and forced major economies to lockdown themselves. This plummeting of external trade narrowed India’s trade deficit to $6.76 billion in April 2020 from $9.76 billion in March 2020. This isn’t a real narrowing of trade deficit, but a transitional phenomenon, quintessential of the lockdown.

There are 30 key export sectors in India. Barring iron ore, which grew by 17.5%, and pharmaceuticals, which grew by 0.25% — thanks to the surge in the demand for Hydroxychloroquine tablets and other medicines during the pandemic — the rest of the 28 sectors experienced negative growth in March and April 2020. The situation didn’t change in May as well due to the prolonged countrywide lockdown.

This narrowing of trade deficit, which is the smallest gap since May 2016, isn’t a positive sign, as it’s caused by a total fall in foreign trading, which jolted a large number of medium, small and micro enterprises as well. The fall in exports of the crucial goods intensified the recession and the pre-existing slowdown, which became severe since the financial year 2017-18, became prominent. But the blame was laid on the COVID-19 pandemic.

Therefore, due to a narrowing down in the trade deficit, India’s foreign exchange reserve has seen a significant increase. However, that’s one part of the story. The other part is the tale of fictitious capital development through stock market speculations, which lures a lot of foreign institutional investors (FIIs). In June 2020 itself, foreign portfolio investors (FPIs) injected $2.45 billion in the Indian markets.

At the same time, Modi’s patron Mukesh Ambani inked a deal with the social-media giant Facebook Inc, which gave 10% stake of his Jio Platforms to the Palo Alto, California-based company. The Silicon Valley got enticed by Ambani’s control over the Indian government’s policymaking and his Reliance Industry’s track record of cajoling policy changes at the highest level to disrupt or monopolise markets. The total investment of $13 billion into Jio Platforms from foreign private-equity funds helped to swell India’s foreign exchange reserves for the time being as well.

Such foreign fund injection through the FII and FPIs isn’t a promising thing for the economy. One must remember how FPIs have exited in droves from the Indian markets, selling stakes worth over Rs 96 billion within days after Modi announced his much-hyped Rs 20 trillion-worth “stimulus package”. The recent foreign investments in Ambani’s project or to that of Kotak’s can’t be labelled as India’s gain. It’s a temporary phenomenon.

India’s foreign exchange reserves did cross the half-a-trillion-dollar mark, but it’s through a route that neither generates hope nor promises sustainability. The benefits of this surge won’t trickle down to the common people, the poor of the country, the millions of migrant workers who walked hundreds of miles to their villages due to Modi’s sudden lockdown announcement. It will, eventually, benefit Modi’s patrons, the big corporate houses. Until such big corporates pull the strings of the governments, such periodic economic gimmicks won’t help the people.