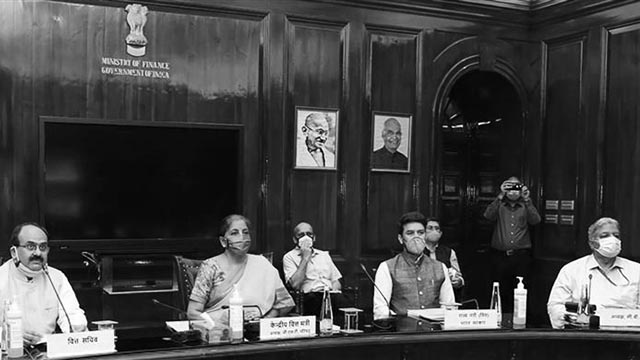 Finance Minister Nirmala Sitharaman is infamous for her gaffes. Sitharaman’s recent rhetoric invoking the “Act of God” or “force majeure” factor, citing the COVID-19 pandemic and the subsequent lockdown, to deny the states their due compensation according to the Goods and Services Tax (Compensation to States) Act, 2017, caused an uproar among the opposition-ruled states, as they found Prime Minister Narendra Modi’s government betraying them at a crucial juncture.

The GST Compensation Act guarantees the compensation for any loss of revenue in the first five years of GST implementation by the states, using a cess levied on sin and luxury goods. The economic slowdown, which has been rampaging since the last couple of years, caused a 40% gap in revenue collected and compensation to be paid to the states.

In July, Finance Secretary Ajay Bhushan Pandey told the Parliamentary Standing Committee on Finance, headed by Jayanta Sinha, that the Union can’t pay states their GST share as per the current revenue-sharing model. This denial to share the GST revenue with the states isn’t merely a violation of the GST Act but also a betrayal of the federal structure. Treating states like New Delhi’s colonies, the Modi regime has shown how the anti-people GST regime can leave states financially dry.

States’ GST revenue sharing gap in the financial year (FY) 2020-21 will be Rs 3 trillion, while cess collection will be around Rs 650 billion. There will be a shortfall of Rs 2.35 trillion. For Sitharaman, whose department has sucked out the revenue of the states, leaving them at a vulnerable position, the only solution can be borrowing by the states.

Sitharaman proposed that the states must borrow to meet the revenue gap as the Union remains non-committal. She proposed a ridiculous formula with the states to meet the revenue gap through borrowing. Sitharaman proposed that either the states borrow Rs 970 billion at a “reasonable rate” of interest within a special window or borrow the entire amount later. This means, either the states collectively borrow Rs 970 billion or borrow the entire Rs 2.35 trillion and increase the burden of debts on their already strained economies.

This is a unique proposal by a Union finance minister. If the states must borrow to get the money that’s their own and must pay interest for that, who will benefit from that equation? Sitharaman didn’t inform why the Union is not borrowing at a “reasonable rate” and sharing the money with the states while taking care of the repayment as its own liabilities? Why passing the buck of repayment on the states when they have a rightful claim on the money?

The invocation of “Act of God” or “force majeure” clauses to deny the rightful dues to the states by the Union is based on farcical grounds. The GST Compensation Act has no provisions of “force majeure” that deals with unforeseen circumstances and nullifies many clauses, especially duties of the parties, during such situations. The GST Compensation Act, 2017, clearly states that it’s the responsibility of the Union to pay the states their GST revenue shortfall until 2022.

If the states so want, they can take the Union to the court and prove the violation of the Act. Invocation of non-existent clauses can’t save the Modi regime or Sitharaman if the judicial process is followed. However, despite tall rhetoric, not all states, except Kerala, showed any resolution in fighting back against this economic onslaught.

Modi’s Bharatiya Janata Party-ruled states remained mum, and others kept wailing. Kerala finance minister asked the centre to borrow the amount and pay the dues to the states without imposing the burden of interest on them. The Modi regime and Sitharaman have ignored this suggestion because there is no intention in North Block to save the states from bankruptcy.

By denying the states their dues and by invoking a non-existent clause in the Act, Sitharaman is trying to not just dupe the states and their people but also violate India’s federalism. Since coming to power, the Modi regime has been carrying out onslaughts, one after another, against the federal structure and pushing India towards a more unitary setup. It’s an onslaught on the constitutional setup and it’s imperative to oppose such arbitrary and dictatorial diktats by New Delhi to save federalism.