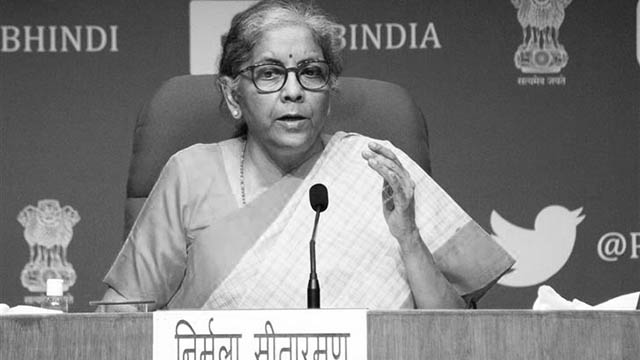 On Thursday, November 12th 2020, Indian Finance Minister Nirmala Sitharaman unveiled a set of measures to tackle the economy’s abysmal crisis, which has been aggravated due to the pandemic-related lockdown. Labelled as Atmanirbhar Bharat 3.0 package, as it follows the earlier announcements of Atmanirbhar Bharat package in May and October, this new package has no game-changer element, despite the corporate-controlled mainstream media’s hullaballoo over it.

This new announcement, which has three parts––a Rs 1.46-trillion-worth production-linked incentive (PLI) package, a Rs 1.19-trillion-worth “stimulus” package with Rs 650-billion-worth fertiliser subsidy––is pegged at 1.2% of the GDP. However, according to the finance minister, if one calculates all schemes announced by Prime Minister Narendra Modi’s government since May 2020, including the Reserve Bank of India’s (RBI’s) monetary measures, then the total package will be of Rs 29.88 trillion, which is 15% of India’s GDP. The lion’s share of this Atmanirbhar Bharat (Self-reliant India) scheme is liquidity allocation, and a minuscule proportion is a fiscal stimulus.

On November 12th, Sitharaman didn’t deviate from her earlier practice of labelling liquidity allocation for credit as a stimulus. She gave a detailed list of purported achievements of the Modi regime in the Atmanirbhar Bharat Abhiyan, before announcing the Atmanirbhar Bharat 3.0 scheme, which was mostly about the credit provided to different sectors. No significant fiscal stimulus was found in the list, which would have provided the poor with some money and hope during the dark phase of the economy.

The story of Rs 650-billion-worth additional subsidy on fertilisers

Though it may appear that the total fertiliser subsidy for the FY 2020-21 has been increased to 1.36 trillion due to rising sales, the reality is different. In a press statement, the ICRA has stated in January 2020 that despite the government’s Rs 800 billion subsidy allocation, which was Rs 100 billion more than that of the FY 2018-19’s, the total subsidy requirement for the industry is currently Rs 1.25 trillion and companies are borrowing to meet operating costs. Despite the ICRA predicting that fertiliser companies will post a profit at the end of the current FY due to high sales, there are huge arrears due to the companies.

More than Rs 600 billion out of the recent allocation may go towards paying the arrears due to the companies. Hence, the fertiliser subsidy declaration in the Atmanirbhar Bharat 3.0 won’t help the farmers much. Moreover, as per the fifth report of “Study of System of Fertilizer Subsidy” submitted by the Standing Committee on Chemicals & Fertilizers, Ministry of Chemicals and Fertilizers (Department of Fertilizers), submitted to the seventeenth Lok Sabha, the Modi regime is mooting giving up the present method of providing subsidies to the producers, and replacing it with a direct-benefit transfer (DBT) mechanism.

For years the Modi regime is trying to end the fertiliser subsidy paid to companies and significantly reduce the amount by adopting the DBT. It will make the farmers pay a higher price for fertilisers bought from the market and then wait for the subsidy from the government by linking their documents like Aadhaar. The best way to compel the rural poor to fall in the trap of the big-eyed corporate-funded state machinery!

What about the PLI scheme?

Earlier, the Modi regime had announced a PLI scheme, with a proposed outlay of Rs 513.11 billion for manufacturers of medical devices, mobile phones and specified active pharmaceutical ingredients. Other pharmaceutical products like complex generics, anti-cancer and diabetic drugs, in-vitro diagnostic devices and special empty capsules have been brought under the aegis of the PLI scheme now.

However, despite this allocation, which experts are claiming may help the crisis-ridden automobile sector that suffered a lot in the FY 2018-19 and FY 2019-20, there are concerns that the measures are half-hearted as the operating cost in India due to various bureaucratic impediments remain a big challenge for businesses. Also, providing PLI is a supply-side measure, which the Modi regime is consistently adopting to meet a demand-side challenge, mulishly denying the existence of the real issue.

Moreover, the PLI allocation for these industries, through which the Modi regime wants to lure foreign investment in these sectors and give a message to the US-led global imperialist lobby that India isn’t turning protectionist but only trying hard to become an alternative to China, is going to take a long time to provide adequate employment opportunities to the unemployed. There will be no immediate absorption of the huge unemployed labour, now waiting for jobs in the market.

Other allocations and schemes of the Atmanirbhar Bharat 3.0

Sitharaman announced a host of other measures, mostly liquidity-related, as part of her Atmanirbhar Bharat 3.0 package. But the significant among them is the allocation of another Rs 100 billion for Mahatma Gandhi National Rural Employment Guarantee Act (MNREGA) and PM’s rural roads scheme. With this Rs 100 billion, the total allocation for MNREGA in the present FY reached Rs 1.1 trillion. Out of this, as per Sitharaman, Rs 735.04 billion has been spent to create 2.51 billion person-days of employment.

As the adequate data isn’t released yet regarding the number of beneficiaries and the average amount they have earned since April 2020, therefore, it’s impossible to comment on the success of the programme in dealing with the rural distress. However, the real issue with the MNREGA has not been the only allocation, but also its timely disbursal, a delay in which defeats the purpose.

Sitharaman also announced a new Atmanirbhar Rozgar Yojana (Self-reliant income scheme) for the organised sector firms employing less than 1,000 workers. Under this Atmanirbhar Rozgar Yojana, the Modi regime will pay the entire employees’ provident fund contribution for all new workers hired between October 1st 2020 until June 30th 2021. This scheme is shown as an impetus for the employers to hire new employees and, thereby, address the challenge of unemployment.

However, this scheme focuses on aiding the organised sector, and for employees with a maximum salary of Rs 15,000 per month. While there is a need to revise the minimum wages for unskilled workers, given the retail inflation inching to 7.61% in October 2020, fixing the ceiling at a rate that’s opposed by the trade unions is sheer debauchery. Moreover, 90% of Indian labour is employed by the unorganised sector. Merely supporting a section of the organised sector, where most low-wage workers are hired through contractors and are devoid of rights and benefits, isn’t going to be effective.

Rather than fixing a higher ceiling at Rs 15,000, the government should provide support to the medium, small and micro enterprises (MSMEs) with wage support so that they can revive themselves. But the Modi regime provided credit line to MSMEs, knowing well they are in no position to take further loans and go bankrupt due to falling demand. There is an ardent need of increasing government expenditure in providing the people with employment and only the public sector undertakings could’ve done so if the Modi regime had an iota of real concern for the common people.

Like its previous versions, the Atmanirbhar Bharat 3.0 package is also ballyhoo rolled out to deceive the middle-class and the poor before the Hindu festival of Diwali. It’s long-term and short-term implications won’t help to change the prevailing precarious economic condition in which the common people are struggling to meet ends. The Modi regime’s unpopular measures have been repeatedly proving that the current crisis of capitalism can’t be revived by mere package rollouts and liquidity but by an equitable distribution of wealth by the decimation of the corporate-feudal hegemony on the economy.