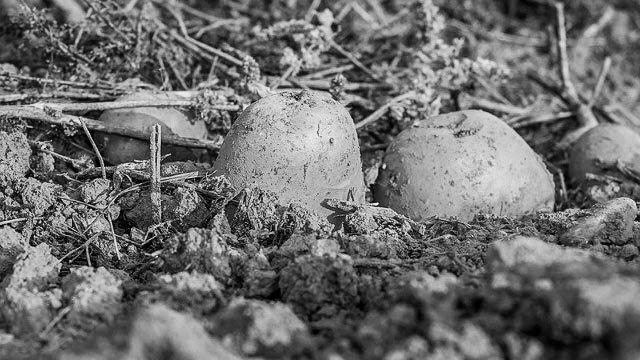 As India experiences its biggest farmers’ upheaval in decades, agrarian issues are highlighted a little in the mainstream press. Amid steep inflation caused by food price rise, rising unemployment and a total economic catastrophe, the farmers of India are the worst sufferers. The farmers of West Bengal aren’t an exception. They are also suffering the brunt of price hike of farming inputs and have been experiencing fall in income, year-upon-year. Potato cultivation is their ray of hope. Particularly in North Bengal, potato cultivation is considered as the only profitable option in agriculture. However, potato cultivation in North Bengal is severely stressed and looks at a gloomy future.

North Bengal contributed 1.9m metric tonnes (MTs) of a total 10m MTs of potatoes produced by West Bengal in 2016-17. Potato is considered as one of the most prominent profitable crops in North Bengal’s districts, particularly Jalpaiguri, Cooch Behar, etc. Every year, the farmers expect a good price for the crop. The prices of other crops do not yield much profit for them. Paddies precede potato cultivation in North Bengal; this year (2020), the farmers of North Bengal suffered losses as they were compelled to sell paddies (Jamuna variety) for Rs 1,300 per quintal, which gave them a meagre profit vis-a-vis the expenses. Paddies don’t yield much profit now. Therefore, the farmers are inclined towards potato cultivation in North Bengal, especially after the crop sold at a good price last time.

Many youths from North Bengal districts go to neighbouring country Bhutan or the southern state Kerala in search of a livelihood. However, due to lockdown, most of them have returned to their native villages unemployed without any steady income. Some of them have worked in the Mahatma Gandhi National Rural Employment Guarantee Act scheme’s projects for a few days, but it wasn’t a match for the income they used to bring home from Bhutan or Kerala as migrant labourers. They used to work as labourers and send money back to invest in potato cultivation in North Bengal. But this year, they are facing immense financial distress. An excessive rise in the price of potato seeds is making it more difficult for them to cultivate the crop.

A farmer can yield approximately 90 to100 packets of potato(50 kg each) in one bigha of land. With an expense of Rs 25,000 per bigha, they could yield 5,000 kg of potato. Therefore, they spend nearly Rs 5 to cultivate a kilo of potato. However, it’s hard for them to earn enough to cover up the cost of farming. In 2019-20, potato fetched a good price for farmers engaged in potato cultivation in North Bengal and many earned profits when the crop was sold in April and May. This more farmers to plunge into potato cultivation during 2020-21 crop cycle, expecting better returns. But the usurers and local feudal forces have tapped the opportunity and have increased the prices of seeds to exploit the farmers.

This caused a severe rise in potato seed price, as shown above. The rise in input costs will become disastrous for the farmers engaged in potato cultivation in North Bengal, as they can hardly sell the crop at a profitable price after harvesting in the next season when the crop will not yield much profit. So, if they can’t get good prices for their crops, they will have to incur a huge loss, which is anticipated by many experienced farmers of the region. The trend of potato cultivation in North Bengal, according to the input cost vis-à-vis the selling price, shows that whenever the farmers get a better price, the input cost increases manifold during the next year’s sowing season. Moreover, the volatility of agricultural market never sustains the same price for farmers every year, rather, after providing profit for a year or two, one crop’s price can experience a sudden fall, which will push farmers, especially the small and the marginal farmers, as well as sharecroppers, to an abysmal crisis.

Unavailability of institutional rural credit is one of the biggest issues for farmers involved in potato cultivation in North Bengal. Though some farmers have Kisan Credit Cards that give them access to bank loans at 6% interest, they are a minuscule part. Due to the 1968 Teesta flood, a large number of small farmers have lost their land-ownership documents and they still haven’t managed to get their land documents from the authorities, despite the erstwhile Left Front government implementing a land reform programme from 1978 onwards. Due to the lack of documents, they can’t apply for agriculture loans from the public sector or cooperative banks.

In such a grim scenario, the farmers are borrowing from micro-financing companies that are rapidly blistering throughout rural West Bengal. These companies and their feudal usurer lackeys charge an exorbitant interest rate that ranges between 20% to 25% per annum and becomes a noose of crisis around the farmers’ neck. If the farmers aren’t able to yield a good amount of potatoes and don’t get a good price, a bleak future awaits them. The Indian Meteorological Department has already warned that in 2020 India will have a relatively colder winter, which is not showing rays of hope to the farmers who are investing a lot of money, borrowed from micro-financing companies, in potato farming. Too much cold weather causes potato blight (Phytophthora infestans) disease in potatoes, which damages crops. In such a situation the farmers will be in extreme crisis.

Though the 2021 West Bengal Assembly election is knocking the doors, the dominant narratives are betraying the cause of the farmers of the state. Even when there is a lot of noise over the farmers’ protest in New Delhi, no mainstream party is worried about the plight of the farmers of West Bengal, especially those engaged in potato cultivation in North Bengal. The religious binaries are creating extreme polarisation and the real issues are being buried deep. Left, right and centrist parties are busy fighting the election with hyperbolic rhetoric around “nationalism” and tall promises. But none is concerned about the farmers. The farmers can have themselves heard, like the farmers of Haryana and Punjab, despite their economic differences with them, by taking control of their own lives and by launching their struggle.