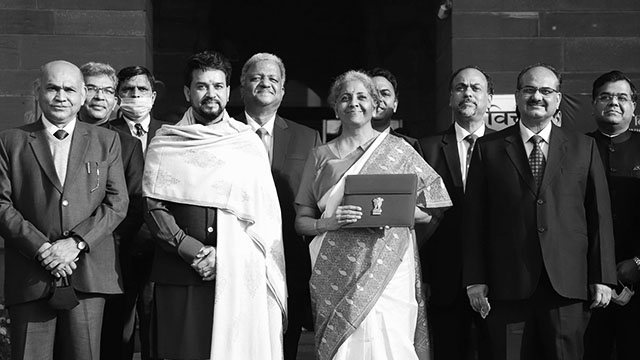 Union Finance Minister Nirmala Sitharaman’s Union Budget 2021-22 has failed to disappoint those who expected nothing out of it. Though many “industry leaders”, the crony-comprador capitalists, jumped into the fray to congratulate Prime Minister Narendra Modi’s government for the budget, the common people see none of their interests been addressed. It’s a budget of doom for the common people, the working class and the farmers.

The revised estimate (RE) of fiscal deficit for the financial year (FY) 2020-21 has gone up considerably to 9.5% from the budget estimate (BE) of 3.5%, which Sitharaman targeted to limit at 6.8% in the current fiscal. This means, the current government will run the country on borrowings, which accounts for 36% of the government’s source of “income” in the FY 2020-21. The RE of total borrowings for the FY 2020-21 is Rs 18.49 trillion, out of which Rs 545.22 billion foreign debts and the lion’s share of the amount—Rs 12.74 trillion—is taken from market borrowing.

According to the Union Budget 2021-22, 20% of the government’s expenses go towards paying interests, which is the highest of all other expenses. Though the BE for the FY 2021-22 limits the borrowings at Rs 15.07 trillion, there is a huge possibility that the borrowings will go up. Moreover, the BE of Rs 15.14 billion as foreign borrowings looks quite unreliable, as the BE was Rs 46.22 billion in the FY 2020-21. It’s certainly to go up and drain the country. Though the COVID-19 pandemic is blamed for the increased borrowing, the earning-expense statements of the past budgets also show the similar trend of interest payment remaining the largest of government’s expenses.

While Sitharaman made the Union Budget 2021-22 a propaganda megaphone for the Modi regime, which faces a strong challenge of legitimacy, as farmers are protesting the three contentious farm laws passed by it, the numbers and the achievements flatten the balloon soon before it tries to fly. The government has reduced allocation on agriculture considerably. While the agriculture and allied services BE for the FY 2020-21 was Rs 1.55 trillion, the RE is Rs 1.45 trillion and therefore, the BE for the FY 2021-22 is Rs 1.48 trillion, which is considerably lower than the BE of the previous year.

In the FY 2020-21, the fertiliser subsidy was increased, apparently to help the chemical companies amass profit instead of benefiting the farmers, from BE of Rs 713.09 billion to an RE of Rs 1.34 trillion, but the BE is reduced to Rs 795.30 billion for the FY 2021-22, even when the economic situation of the farmers is pernicious due to the volatility in the agricultural produce market caused by the government’s decision to allow the corporate domination in agriculture.

Food subsidies for the poor have been reduced from RE of Rs 4.23 trillion in the FY 2020-21 to Rs 2.43 trillion for the FY 2021-22. This reduction in the Union Budget 2021-22 is a sign of the government withdrawing the provision of free food grains for the poor when the unemployment impasse isn’t solved. This means, despite the tall talk of bringing every poor under the food ration scheme, there will be less allocation for their food. Subsidies on petroleum are cut drastically. While the BE for the FY 2020-21 was Rs 409.15 billion, the RE was Rs 387.90 billion, but the Union Budget 2021-22 allocated only Rs 129.95 billion as BE.

Healthcare got a special mention in the Union Budget 2021-22, as Sitharaman stressed on the government’s focus to uplift the health infrastructure in the country, albeit with the help of private players, even when the COVID-19 pandemic showed the necessity of public health infrastructure to cope with such challenges. However, if the allocation for healthcare is seen, subtracting the amounts for sanitization and hygiene that are included in it to inflate the sum, the BE for the FY 2021-22 is Rs 746.02 billion, when the RE for the FY 2020-21 is Rs 824.45 billion.

Similarly, the allocation for education has gone down considerably in the Union Budget 2021-22 when it should have increased due to the COVID-19 pandemic causing disruption in education and depriving millions of studying due to the unavailability of devices to access online education. The education BE for the FY 2021-22 is Rs 932.24 billion, which is less than the BE of the FY 2020-21, which was Rs 993.12 billion. The RE for education in the FY 2020-21, when the contentious New Education Policy 2020 was released, has gone down to Rs 850.89 billion, while the actuals in the FY 2019-20 was Rs 894.37 billion. This shows the apathy of the Modi regime towards education and how it’s keen to only allow the private sector a full play in this sector.

With cuts and unapologetic reduction in social welfare spending, while stressing on selling off all public assets to enrich the big corporate houses, show how the Modi regime’s Union Budget 2021-22 is designed for the rich. A planned, welfare-oriented and the public sector-driven economic dosage is imperative to revive the economy. But Sitharaman won’t do that. The reduction in allocation for social welfare, food and other subsidies, agriculture, health and education, etc, will have negative impacts on the economy that’s already ailing and suffering asphyxia.