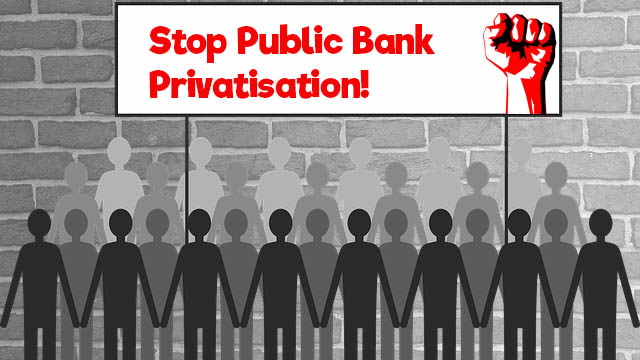 Throughout India, bank employees of public sector banks (PSBs) are participating in a two-day-long strike on March 15th and 16th to oppose Prime Minister Narendra Modi’s agenda of bank privatisation through the merger of PSBs and demanding that the government ‘retrograde banking reforms’. Nine bank unions have come under the umbrella of the United Forum of Bank Unions (UFBU) demanding the rollback of Modi’s divestment agenda that aim to collect Rs 1.73 trillion. The two-day-long bank strike on March 15th and 16th is a major one that has hit the regular operations of the PSBs, stalling branch operations, credit and other services.

Although private banks like HDFC Bank, ICICI Bank, Citi Bank, Axis Bank, etc, remained operational by denying their employees a chance to unionise and show solidarity to their PSB counterparts, by threatening them with harsh penalties, they indeed supported the strike politically. The national finance sector suffered a setback in the middle of the last month of the financial year (FY) due to the two-day-long bank strike on March 15th and 16th. Both retail and business consumers faced difficulties as their branches went to strike, however, only internet banking and ATM services remained operational.

Since ascending to power in 2014, Modi-led Bharatiya Janata Party (BJP) government has unapologetically followed a neo-liberal economic formula, under which it has undertaken anti-people bank reforms, which aim at destabilising India’s finance sector. Apart from merging the PSBs, the Modi regime has allowed the banks to write-off trillions from their books to ensure that the bad debts of India’s big corporate houses and their foreign masters are waived off. This helped the crony-comprador sponsors of the BJP on the one hand, and, on the other, it helped the Modi regime to showcase the PSBs in poor light to aid their narrative that privatisation will make them efficient.

What’s fuelling the growth of the private banks vis-à-vis the PSBs? The government’s policy of corporate appeasement. By religiously following the World Bank and International Monetary Fund-led (IMF) neo-liberal economic model’s diktats, the Modi regime has been on a privatisation spree with the intent to handover all public assets to the ailing foreign corporations and their Indian comprador lackeys to help them recuperate from the crisis caused by capitalism’s inherent contradictions. This policy has also jeopardised India’s financial security as its money market’s stability is rooted in the fact that there has been a robust PSB sector.

Finance Minister Nirmala Sitharaman—who arrogantly refused to roll back the banking reforms, thus, forcing the UFBU to call the two-day-long bank strike on March 15th and 16th— had announced that the Modi regime will divest stakes in two PSBs apart from the IDBI in the FY 2021-22 during the Union Budget presentation. She had said in her budget speech, “Other than IDBI Bank, we propose to take up privatisation of two public sector banks and one general insurance company in the year 2021-22. This would require legislative amendments and I propose to introduce the amendments in this session itself.”

Despite these protests, the Modi regime shows no sign of reversing the PSB privatisation drive. Moreover, it’s keen to roll-out the four anti-worker labour codes, which are as dangerous as the farm laws passed by it, soon after the elections in four states and a union territory. While millions of farmers protest the contentious farm laws, the workers’ struggle against the labour reforms, privatisation, and the bank-insurance employees’ struggle will cause a severe jolt to the Modi regime. The UFBU’s two-day-long bank strike on March 15th and 16th became a significant step in the countrywide movement protesting farm reforms and neo-liberal economic reforms.