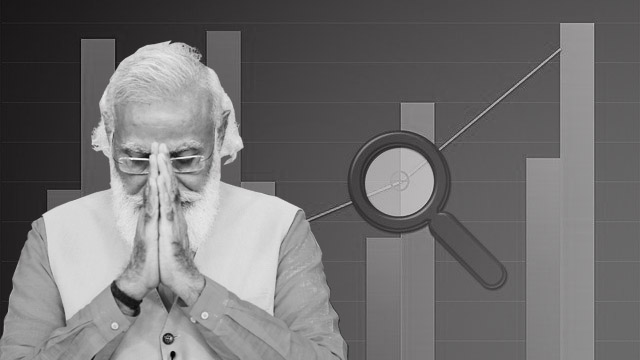 After the first quarter (Q1) gross domestic product (GDP) of the financial year (FY) 2021-22 grew to Rs 32.38 trillion, a 20.1% growth against the 24.4% contraction — Rs 26.95 trillion—in Q1 of FY 2020-21, Prime Minister Narendra Modi’s Bharatiya Janata Party (BJP) is on a celebration spree. A narrative is set by tagging the 20.1% GDP growth in Q1 FY 2021-22 as a historic achievement. However, such infantile jubilation manifests the BJP’s desperation to project any random data as the Modi regime’s success when it hardly has anything genuine in its kitty.

The Indian GDP’s growth rate at constant prices (base 2011-12) has been consistently falling for years. Though Modi changed the base year a few years ago to show higher growth vis-à-vis the erstwhile Congress party-led United Progressive Alliance (UPA) government’s years, the project backfired as the GDP growth rate has been southbound since the demonetisation exercise in FY 2016-17.

Due to this reason, it’s the compulsion of the Modi regime to create favourable optics. By shifting its economic goalposts, the Modi regime has been successfully duping the people. In such a situation, when the news regarding 20.1% GDP growth in Q1 FY 2021-22 was out, the BJP saw great potential in it. Scores of BJP leaders, ministers and social media activists started peddling the narrative that Modi’s “visionary” economic policies, amid the pandemic, bolstered the economy and helped it grow. However, simple mathematics was ignored in this, which renowned economists and the Opposition pointed out.

Professor Kaushik Basu of the Cornell University, who was the former chief economist of the World Bank and a student of Nobel Laurette Amartya Sen, lambasted the BJP’s propaganda. “It needs just a little arithmetic to see that India’s Apr-Jun 2021 growth of 20.1% is shocking bad news. The 20.1% is in comparison to Apr-Jun 2020 when India’s GDP had fallen by 24.4%. This means compared to GDP in Apr-Jun 2019 (i.e. 2 years ago) India has had a growth of -9.2%,” Basu tweeted.

Since his disastrous demonetisation rollout, Modi has mocked the judgement of the economists who have been critical of his policies. Be it Basu, the legendary Sen, Nobel Laureate Abhijit Banerjee or former prime minister Manmohan Singh, everyone suffered the wrath of Modi’s feral supporters on the internet. As their predictions regarding the economic growth’s slump came true, Modi faced global ignominy. It’s, perhaps, for the first time that Modi and the BJP found something marketing-worthy regarding the economy after the tall, yet hollow, claims regarding “Atmanirbhar Bharat” made last year. Therefore, the BJP thought to make the story of 20.1% GDP growth in Q1 FY 2021-22 quite a touché for Modi’s critics.

The Centre for Monitoring Indian Economy (CMIE) showed that in July 2021, though India experienced a record addition of 16m jobs, most of these jobs were of poor quality. CMIE showed that 18.6m new daily wagers and small traders were added to the workforce, while 11.2m people were additionally employed in agriculture. At the same time, salaried, regular and better-quality jobs fell by 3.2m in the same month.

The CMIE data, coupled with the government’s Periodic Labour Force Survey, showed that from 42.5% in FY 2018-19, agriculture employed 45.6% of the total labour force in FY 2019-20. This has happened due to labour distress in the urban areas and aggravated by the lockdown in Q1 FY 2020-21. Now, as the unemployment rate, according to a 30-day-average estimated by the CMIE, hovers at 8.2% at the end of August 2020, it’s already a gloomy situation for the majority– the poor.

Marketing the 20.1% GDP growth in Q1 FY 2021-22 can bring temporary respite for the BJP and an ostrich’s relief to its supporters, while the economic situation remains perilous. As the Modi regime, through the asset monetisation programme, is clandestinely selling off India’s resources to a handful of crony corporates, the hope of any salvation from the economic woes appears remote. Not just mathematics, even common sense has lost to the BJP’s propaganda at present.