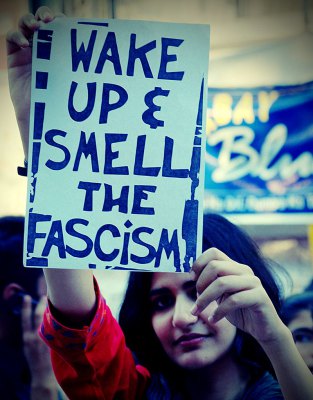 A recently published interview of Lal Krishna Advani, where the ex-Vice Premier said that the powers that brought the emergency are still operating, created a ruckus and initiated a nation-wide controversy on mainstream corporate media regarding the real target of the comment. The mainstream media is calling it a rift between the camp of the deposed octogenarian leader and his once-upon-a-time disciple turned bete noire Narendra Modi and his coterie. The power struggle between the two intensified post-2012 when the former Chief Minister of Gujarat, Narendra Modi, started pitching for the Prime Minister’s candidacy and worked hard to end the Vajpayee and Advani era under which the RSS saw its golden days.

Most national dailies that are funded by the multinational corporations and their electronic media wings have fanned this controversy as an attack by the exiled leader of BJP against the Modi – Shah clique. The parent organisation of the BJP, the RSS, came out in damage control by claiming that the old guard didn’t attack any particular clique or individual within the BJP government, but expressed his views in a “philosophic” sense.

Advani, the right-hand man of ex-premier and BJP stalwart Atal Bihari Vajpayee, cherished the dream of becoming the prime minister of the country and Vajpayee had to concede his ambitious demand by carving out a special deputy prime minister post during his tenure at the beginning of the new millennium. Often decorated with the title of “strong man” by the RSS for his alleged role in demolishing the Babri Masjid and fanning up communal riots and polarisation through his venom spitting speeches during the notorious rath yatra that started in the late 1980’s to rake up the fortune of the BJP, Advani’s dream of occupying the highest seat in a government was thrashed in the 2009 general elections in which his self-styled strong Prime Minister campaign was booed by the people of India.

Modi took over from where Advani stopped his caravan and he is still carrying forward the legacy of Advani’s communal polarisation drive to higher planes. After winning power, the Modi and Amit Shah clique refused to entertain any power sharing with the Advani camp, which had nothing much to offer to the arsenal of Modi’s parliamentary flock. Following the normal routine of right-wing parties, the Modi-Amit Shah clique, with the overt support of the RSS, sidelined and isolated Advani completely by clipping his wings both politically and organisationally. However, in order to portray an iron strong unity among themselves before the public, the BJP gave him the titular position of “Marg Darshak” within the party. The “Marg Darshaks” or the guides are nothing more than a pensioners club in the saffron party where the old are thrown in.

Advani still used his influence within the party and the government to call the shots, however, with the Modi Gate scandal that included Sushma Swaraj, the minister who swore allegiance to Advani camp, the Marg Darshak anticipated his leftover influence getting jeopardised within the party and the Modi government. Hence to ensure that the Modi government continues to give some or other concession to the ministers from his camp and not isolate them under any pretext, Advani attempted a manoeuvre, which he can retract as “mis quotation” like his earlier controversies, including the “Jinnah Episode”.

The Undeclared Emergency Imposed on the People of India

The fact well known to the politically conscious and progressive people is that the country never came out of the national emergency, and the democratic institutions of the country along with the administration is managed according to the whims of the most fascist forces that rules this nation. The change of guards through one after another elections have not eased the hardships imposed on the people, and moreover, the people are left with just one democratic right, i.e. the right to vote.

The press censorship is not here officially, but the whole bloc of mainstream print and electronic media are the pillars of the government and works hard to help it in policy implementation. Owned by the foreign monopoly capital in collaboration with Indian big corporations, these media houses work exclusively to shape public opinion in favour of the government policies, especially those promoting the neo-liberal economic structure and follows the prescription of globalisation and these very media houses attack any dissent that brews within the politically aware masses and brand them as “anti-development” or “anti-national” forces. The targeted vindication campaign of the corporate media along with its broadcasting of lies and fabricated tales have not bettered but worsened the situation than that of 1975.

More draconian laws are enacted in recent years in comparison to the two years of the official emergency. From the now scrapped TADA and POTA enacted respectively by the Congress and the BJP to the recent UAPA of the Congress government supported by the BJP, even dwarfs the draconian rule of the Indira – Sanjay Gandhi’s regime. More peasants and tribal people were evicted from their land and forest in the neo-colonisation era of India post emergency than what was done during the two years of emergency, and more people are imprisoned, tortured, killed on fake charges at present than what was done in the days of Indira regime. The communal polarisation of the present period is more dangerous than the dark days of 1975-77 when there was at least no naked Hindutva rule imposed on the masses.

Though at present the Indian state does not paste the label of national emergency on the daily chores of governance, but those fascist practices are still on, which disregards the democratic ethos and discourse, reactionary policies are implemented against the people of the nation camouflaged by the rhetoric of “nationalism” and “patriotism”. The Hindutva fascist rule and the Brahminical tyranny is choking the leftover democratic fervour. What Advani said today is something that is existing since last 40 years and there is no dearth in the efforts by the powerful nexus of capitalists, feudal lords, foreign corporates, the political leaders, and the mafia patronised by them in repressing the people and their struggle for a just and fair society. It even happened when Vajpayee – Advani clique was in power and it will continue to happen under any regime that usurps power in India through the parliamentary route.

People awakened by the progressive forces, fully aware of their rights and values can only bring an end to this fascistic way of ruling a nation by five percent of the population imposing their dictatorship over the rest 95 percent. Only the people of the country hold the key to the lock of changing the present order and without their participation from the grassroots level, we cannot expect to get out of the dark phase of emergency imposed on us unofficially since 1977.