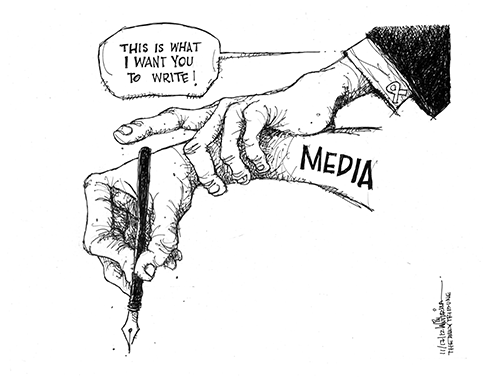 (This article was first published in October 2016 in the previous version of People’s Review. Due to an incident of hacking the old website was pulled down and we could only restore the old articles in this section)

The war cry, blended with an usual cacophony of high-pitched anchors working as gadflies in the state-of-the-art newsrooms of corporate news channels in Mumbai or New Delhi, is now slightly dying down; the curve is moving south after two weeks of high melodrama, probably because the leaders of the regime are trying to enter the festive mood, though some highly accented English speaking anchor cum Eminence Grise is continuing the old lectures on his version of “patriotism” to ensure that his master’s policy of keeping the air toxic is not interrupted. Studios were converted into war rooms and the anchors kept on telling their viewers how a military operation is carried out by showing demonstrations using 2D modelling along with the usual dosage of chauvinistic vitriol to keep the TRP high and the ball of nationalism rolling down the lane. In the art of using the corporate media for ventriloquism, the BJP has set new standards that no other party can even get close to. Now, that art is helping the BJP to reap excessive political mileage by feeding the “nationalist” sentiments of the upper-caste “patriot” people of the poll-bound Uttar Pradesh, Punjab and the home turf of Modi, Gujarat. Long gone the debate on the authenticity of the “Surgical Strikes”, which the DGMO claimed happened “along the LOC” and the BJP and other offshoots of the RSS claimed happened “across the LOC”, the trouble in taming the rambunctious mass uprisings in the Kashmir valley against the Indian occupation through all the brutal measures at hand, despite imposing a three month long curfew, has caused the burly state machinery of Modi and Mufti look dwarfed and experience huge ignominy.

DGMO, Lt General Ranveer Singh’s claim of making a series of surgical strikes to kill Pakistan sponsored terrorists, and to dismantle their launch pads “along” the LOC on 28th September failed drastically after few weeks to hype the pro-military sentiments and to raise the para of jingoism due to a critically sick economy, which is showing no sign of recovery, especially when the unemployment tally is rising and the prices of essential commodities and food items are shooting through the roof. The common people of the country, the broad masses of the workers, peasants, and toiled people are in no mood to do a lap dance for the elites who are now demanding a war show for sheer pleasure, a war which will be funded by the poor both through taxes and through blood. Entrance of the Reliance Industries Ltd into the foray of defence hardware manufacturing has though raised the chances of Indian government entering into a frenzied war with Pakistan on a limited scale, however, a large-scale war will itself face immense opposition from the home turf where the people, who are involved in the production of food and commodities, are not going to pay the huge amount of indirect taxes that the Modi regime is planning to impose upon them using jingoism and anti-Pakistan rhetoric.

However, an election season in the USA, where the incumbent Democrat administration is keen to seek the re-election of Hillary Clinton, who is now pretending to be a pro-working class and pro-Muslim, pro-Hispanic and pro-libertarian figure, which she is not. The eagerness with which the Democrats are trying to show the Muslim Americans, especially migrants from countries like Pakistan, that they are against the rantings of Trump against the Muslim migrants, makes it imperative for the present administration to maintain a status quo in the Indo-Pak relations until the elections are over and a war can be risked to favour the interest of the military-industrial complex of the US and its allies like Israel, upon whom India is totally dependent for their weapon supply.

The conspiracy to draw attention towards the external frontiers when the economy is jeopardised, or in deep crisis, is an old tool to boost political scores by the politicians representing the interests of the elites. The Modi regime being no different. The servility of an uncritical corporate big media made the job easier for the Modi government, which is now using the media platform as a state propaganda tool to incite chauvinistic hysteria against Pakistan as well as China, which is a thorn in the eyes of the US in the South East Asian region. The propaganda is not going to die down despite the Modi regime scaling down the tone of war rhetoric, as soon as the US election gets over we may find an escalation in tension and skirmishes across the LOC and border with Pakistan. The intensity of the border conflicts with Pakistan and aggressive postures with China will continue until the elections in Uttar Pradesh, Punjab, Gujarat and Goa are over. The ruling Muslim League (N) led by the long-time friend of the BJP, Nawaz Sharif, will contribute equally towards the cause of Modi’s face-saving exercise as a border conflict with India can also distract attention of the Pakistani people from the deteriorating economic condition, growing unemployment and uncontrolled inflation taking oxygen out of the lives of common people in Sharif’s reign.

When Cyril Almeida, a reporter of The Dawn newspaper of Pakistan, did an honest reporting on a government meeting from the other side and found himself censored by the regime of Sharif, he ironically found supporters in the Indian media circles by the same bunch of toady bootlickers of the regime who would have succumbed to the government demand voluntarily and never let the truth see the light of the day, if they were to wear the attire of Almeida. The Dawn, which is one of the mainstream newspaper of Pakistan and a mouthpiece of the elites of Islamabad, surprised the world by strongly criticising the decision of Islamabad that curbed the freedom of Almeida using the harshest language that the likes of Swapan Dasgupta, Kanchan Gupta or Abhijeet Majumdar would have never even imagined. The situation of Indian media is so grim, the servility is so visible, the ‘falling in line’ is so much in practice that even the arch-reactionary Congressman and the former advocate cum war general for Vedanta and Posco, P. Chidambaram had to criticise their servility in an interview with the Indian Express, when the last remaining vestige of free reporting collapsed after the self-styled free-media, NDTV, felt that upholding national security interest will be its principal job rather than free reporting. We didn’t see or hear anything from their self-styled pious and critical journalists like Ravish Kumar or Barkha Dutt uttering a word against this sudden shift in their employer’s policy of reporting.
In a nutshell, a bunch of reactionary toady journalists, on the payroll of big foreign-funded corporate media, are spewing venom and manipulating facts and figures to build up mass opinion in favour of the Modi regime before the crucial assembly elections scheduled for next year. The corporate media journalists doing lap dancing for the regime using their coarse dialect of servility, which is definitely a signal that the democracy is under siege in a fascist rule and it’s the high time to start resisting the fascist onslaught for a democratic and independent future of India. Those who still value journalism with ethos, those who consider it their duty to do a fair and fact-based reporting, those who believe that journalism isn’t acting as the PR agency of the state machine or carrying out state propaganda, should take the initiative to defeat this menace that is paralysing the essential limbs of progressive and honest journalism, if ever it existed.