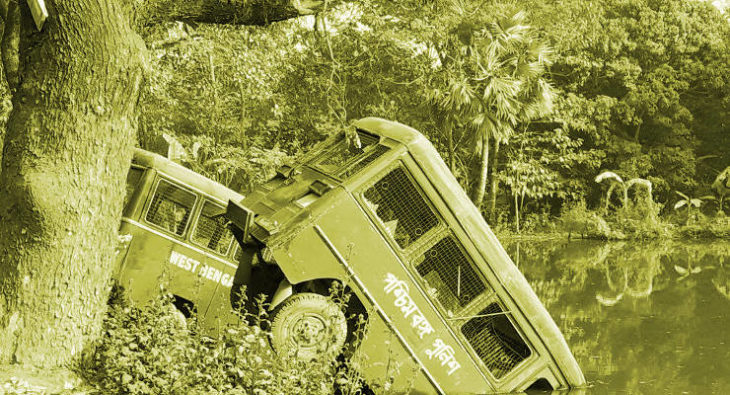 Armed with the immense support of the corporate ganglords and their servile media, Mamata Banerjee declared that the Trinamool Congress led West Bengal government will track and hunt down all political activists who were involved in the Bhangar land movement, which resulted in the brutal killing of two villagers by the police force guided by Mamata’s strongman Arabul Islam.

Modi’s patron Mukesh Ambani’s company Jio joined the league of Mamata Banerjee’s coterie to help the state machinery to carry out propaganda by broadcasting text messages to its mobile telecom customers telling them to snap ties with the “Maoists” and outsider “goons” and maintain peace in the area.

There was a subtle threat in the text message regarding the Bhangar land movement. It threatened the people with dire consequences by stating that the people of the region will have to live in the area and it’ll be the Trinamool Congress whom they have to live with.

Bhangar is now in focus due to the strong anti-land acquisition movement that developed in the area and threw the maiden major challenge to Mamata’s six year long rule from one of her strong turf managed by her trusted lieutenants and musclemen loyal to her.

Mamata Banerjee, with an aim to create a rift between the agitating villagers, informed that her government will only initiate police repression against “outsiders”, i.e. the political activists who are working in the area to arouse the masses against the land acquisition drive for a power grid that seriously threatens the lives, livelihood, and ecological balance in the area.

By initiating police action against those activists who are working in the area and closely knitting the people together through extensive campaigns that are educating them and politically equipping them, Mamata Banerjee manifested her sheer hypocrisy. It’s she, who opposed similar measures of the erstwhile Left Front government when it tried to create a rift between the farmers of Singur by introducing the terms like “willing” and “unwilling” farmers; in Nandigram Mamata opposed the linking of the mass struggle with “Maoist” violence, a smear campaign by the Left Front government to justify its extreme violent repressions.

Mamata Banerjee remained extremely quiet and didn’t bother to use that very state machinery to crush the communal conflagrations kindled by the RSS and VHP with overt support from the state and central leadership of the BJP. The culprits of the saffron brigade who instigated riots in Dhulagarh, Chandannagar, Hazinagar (Naihati), Kharagpur, and other places of the state, are left scot-free, while the police is commanded to chase and arrest those members of the civil society who’ve initiated the maiden large-scale anti-land acquisition agitation in West Bengal during Mamata’s rule.

We have shown earlier that Mamata Banerjee is hand-in-glove with the BJP with which she had a strong tie at least a decade ago. Her opposition to BJP and the Modi regime is toned with an option of reconciliation and her policy of appeasing the fundamentalist and reactionary forces of the Muslim community to push the community, who form 27 per cent of West Bengal’s population, towards darkness and bigotry, has extremely benefited her old ally, the BJP to consolidate the Hindu vote-bank by carrying out a smear campaign against the Muslims in the state.

During the Bhangar land movement, the Muslim community, who are in majority in the area, came out of the clout of Mamata’s dominance through local goons like Arabul Islam and dared to challenge Mamata’s absolute claim on Muslim loyalty in the state. The erosion in the vote-bank and the inability of the henchmen hired by the Trinamool to tame the people frightened the West Bengal government so much that it resorted to the most reactionary style of functioning and started denying the political opponents of her tyrannical regime the constitutional rights of free speech, the right to freely travel, the right to oppose the wrong measures of the government.

Mamata Banerjee and her coterie are claiming that the violence was initiated by the “outsiders” during the Bhangar land movement. However, they remain conspicuously silent when it comes to analysing the role of Arabul Islam, whose henchmen carried out atrocities on the people of Bhangar and neighbouring Rajarhat on behalf of real estate sharks drooling for cheap land. Mamata Banerjee, the Trinamool Congress, the West Bengal government, and the entire corporate media brigade is silent on the abduction of 16 villagers from Khamarait, Machi Bhanga, Gazipur, and Shyampukur area.

Mamata Banerjee and her so-called righteous administration never cared to criticise the syndicate rule imposed by the forces loyal to her throughout the state and its crucial role in triggering the Bhangar land movement. Her party and its different antagonistic factions remained absolutely silent on the forceful land acquisition for the power grid project by threatening the people of the area. Probably because they were not accurately incidents of violence.

The Bhangar land movement will not die down with Mamata Banerjee’s assurance of shifting the project because wherever she will shift the project it’ll create similar mass agitation and Bhangar will remain on the top position in her vendetta list. Her tyrannical role and her government’s effort to curb the constitutional rights of the people of Bhangar will eventually fire back at the regime and hasten its doom in the state where Mamata Banerjee is trying to implement a two party system by bringing up the BJP as the only opposition she will like to work with.