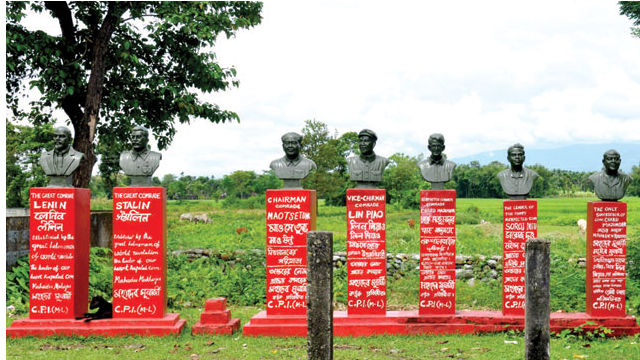 The spring thunder over India blazed for the first time in May 1967, 50 years ago, in a small hamlet of Darjeeling district of West Bengal called Naxalbari. Since then, despite several ups and downs and severe setbacks, the spark that was to ignite a prairie fire kept troubling the ruling classes of the country severely and made drastic changes in the way politics is done in India. Naxalbari was the harbinger of several changes, good changes indeed, in the lives of the poor and the downtrodden people.

Though the effort of the youth of the 1970s, who were inspired by the ideology of the late Chinese communist leader Mao Zedong and the instigator of the Naxalbari rebellion, Charu Majumdar, failed to seize power and the movement suffered serious setbacks due to brutal state repression, the fear of the Naxalbari-inspired peasant rebellion is constantly haunting the Indian corporate tycoons, feudal landlords, foreign institutional investors and parliamentary politicians of all hues.

Caste-based oppression on the Dalit and Tribal peasantry and poor of West Bengal suddenly started taking the backstage and land reforms, reform of the Panchayat system etc. took the centre stage in the politics of the state following the Naxalbari rebellion. For thirty long years, the erstwhile Left Front government of the state and the feudal landlords tried to keep the peasant discontent under the carpet through soft persecution and economic baits. Though the Naxalbari rebellion didn’t end the caste and class oppression in Bengal, it forced the ruling classes to shroud the exploitation and change their methods of ruling to a large extent. Even the hardcore right-wing Trinamool Congress government is unable to change the course of things and avoids direct confrontation with the peasants, unlike the Buddhadeb Bhattacharya government, to ensure its pillars doesn’t crumble.

In neighbouring Bihar, where the famous peasant uprisings of Bhojpur and Punpun took place, the scenario was different; the flames of Naxalbari style peasant movement and rebellion grew stronger in the late 1970s and early 1980s and again erupted in the late 1990s. For the first time in the history of their existence, the Dalit landless peasants and the tribal people were encouraged to dare the upper-caste feudal landlords and they indeed started disobeying them. The Naxalbari movement caused the state machinery to drop its impartial veil and side shamelessly with the big feudal landlords by helping them raise private armies to butcher the Dalit poor and landless peasantry. But the stronger the feudal oppression is growing, the stronger is the resistance to it by the peasants and tribal people.

In states like Andhra Pradesh (undivided), the battle for political power started with the Girijan tribal people launching a people’s war in the Srikakulam area, which once threatened to be the Yenan or the liberated base area of the Indian communist guerillas. The communist movement in the state inspired by Naxalbari strongly shook the foundation of the feudal production relation and the caste oppression unleashed by the feudal landlords.

Throughout undivided Andhra Pradesh, the demand for land reform, end of caste oppression and better rates for forest products grew manifold stronger and due to the presence of the Naxal factor in the politics of the state, the people, the mostly detested poor and landless peasantry, became important elements, whom the high and mighty wanted to isolate from the influence of Naxalbari.

The tribal people of modern day Chhattisgarh, Jharkhand and Odisha are able to speak up and register their protests against the inhuman oppression that was laden over them since ages, and it is caused by the influence of Naxalbari peasant rebellion. It’s the inspiration derived from Naxalbari that the poor tribal people are today resisting the efforts by the big mining corporations to grab their land and evict them from their forests and villages in Bastar. The indomitable spirit of Naxalbari is intensifying the struggle for the protection of – Jal-Jangal-Jameen (water, forest, land) waged by the poor against the big corporations and their hired mercenaries, whom the state is supporting in Chhattisgarh, Jharkhand and Odisha.

This influence of Naxalbari on the tribal people of Chhattisgarh, Jharkhand and Odisha has left the government fuming due to the stalemate of billions of dollar worth natural resource plunder projects that were awarded to the big corporations in lieu of corporate donations to the coffer of the political parties and minister-bureaucrat-media nexus. This very adamant politics of resistance that Naxalbari inculcated and transformed the submissive tribal people into assertive people, fuelled the corporate media’s incessant barking against the movement on behalf of their advertisers and stakeholders.

“Naxalism” is today considered as the principal threat to “national security” as the former premier Manmohan Singh called it. Modi and his coterie love to blame every problem that the country faces today on the Mughals and the Naxals, and promise to end the “menace” as soon as possible. However, the menace continues to live, in the struggle of the farmers facing eviction due to corporate lust for their lands, in the struggle of the endangered tribal communities against the aggression of big mining corporations on their land, and in the battle of the poor and landless peasants for dignity of labour and equality in the caste-ridden feudal heartland of India. Naxalbari and the spring thunder simply refuse to die.

Despite calling Naxalbari the powerhouse of “senseless violence” and anti-national and anti-development forces, the Naxalbari struggle has now become the voice of the marginalised and the downtrodden in those parts of the country where either the government and welfare of the poor remained a utopia, or in those areas where the only thing that the government sends is guns to suppress the people. Naxalbari is the Mecca of courage and inspiration for those who have no outlet to vent out their anger against their exploiters and oppressors and for those who never found justice in the mainstream and sought help from the fringe.

Naxalbari is not the problem or the source of the problem, rather, very unequivocally, it’s the only solution that millions of poor and downtrodden people believe in today because of the sheer lack of any enthusiasm on part of the establishment to uphold their constitutional rights, because if the poor get their rights, the rich and the super rich will suffer and that’s exactly what the establishment doesn’t want. Their attempt to defuse the agitating people, the discontented people using brute military force often retaliates with major blows and the rulers are then left with no more chance but to bad mouth the left-wing ultras using their TV channels and press.

Unless an India, which is egalitarian, inclusive, anti-apartheid, and communally liberal, is built upon the debris of the present state of affair, where the rights of the common people are violated, the land of the poor is annexed, the tribal people are evicted, killed and women gang-raped by the very forces that are paid by the victim’s money to protect them, the spirit of Naxalbari will keep haunting those who sleep in air-conditioned bedrooms after spending a long day at work, serving big corporations, corrupt politicians, or toady media houses. Naxalbari, as a spring thunder and a spectre, will refuse to die, will refuse to wither away, 50 years is just a beginning.