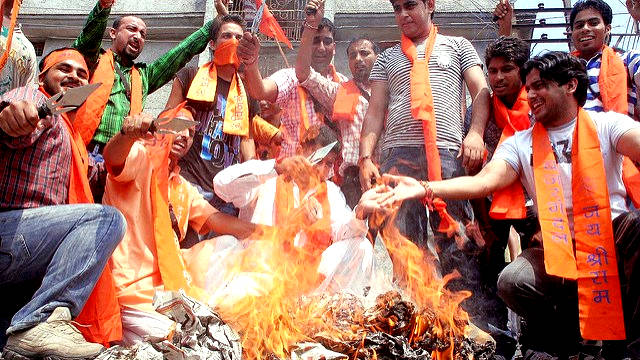 The BJP’s endeavour to Talibanise India on the path shown by the CIA-funded Salafist terror group in Afghanistan, is showing visible signs of progress as in the past 10 days incidents of death threats, issuance of bounty for beheading individuals and the firman of chopping-off fingers or breaking arms of dissidents have been issued by the ruling party’s men from official podiums against filmmakers, artists, opposition politicians and even a sitting chief minister.

Politicians who cite the Islamist terrorism in Iraq or Syria, unleashed by the US proxy ISIS, to polarise the people on communal lines in India, are now showing how good they are in replicating the same module locally and it’s evident that they work for the same masters to serve the same purpose.

BJP’s Bihar chief and MP, Nityanand Rai, who is an upper-caste feudal landlord, threatened to chop-off any fingers that are raised against Narendra Modi; Rai threatened to break-off those hands that defy and oppose Narendra Modi in Modi-fied India. If she was buried, then Indira Gandhi would have turned around in jealousy to see a man, whose political career purportedly started during her rule, to surpass her in consolidating power and in building a larger cult around himself by simply using one tool–extreme Islamophobia.

While rape and murder threats to journalists, opposition politicians, activists and dissenting people were issued so far by the anonymous Modi-bhakt social media trolls on the payroll of the RSS and the BJP, the party’s top leaders restricted their activities only within the ambit of abusing dissenting people with slanders and then spread fake news to incite hatred against them. The Hindutva hate-mongers like Yogi Adityanath, Ramdev, Sakshi Maharaj, Sangeet Som, Telangana MLA T. Raja Choudhary, etc. are specially chosen by the RSS and they are designated with the task of spewing communal venom and to threat and bully the opponents.

The Modi government always use to wash-off its hands if allegations were levelled over its relationship with such hate mongers, by citing the “fringe element” excuse. Even the government never clarified why Narendra Modi follows such people on Twitter, who threatens women with rape and celebrates the murder of opponents. During these three and half years of Modi’s reign, the people have seen how the fringe has metamorphosed into the mainstream under the state machinery’s patronage.

However, these days the Modi government is extremely cornered as it is under attack due to rising prices, unemployment and the severe economic crisis, which resulted due to the neo-liberal economic programmes that the regime unconditionally pursues and due to the implementation of anti-people economic policies like demonetisation and the roll-out of GST.

This situation, the growing discontent among the people, especially the broad masses of the poor and above all, the fading of the “Modi-Magic”, which the BJP capitalised on to win elections, is now turning the Modi regime so desperate that it is forced to let loose its reserve battalion of hate mongers, whom it had hitherto kept inside the closet, on the people and these lieutenants of Modi are now threatening to kill, injure and punish people like mobsters, unapologetically from official podiums of the party and the government.

No government agency is taking any cognisance of this gross violation and mockery of law and order and the Constitutional rights of the people. The violators, protected by the government, roam scot-free, while the people who rightly oppose them, face the wrath of the state machinery. While the government is currently employing the police-state to investigate an adult woman’s decision to convert to another religion and marry a man of her choice, or following up the fake news and slanders propagated by the corporate media to ban an organisation that talks about the plight of the Muslims, it has no interest in curbing the expansion of the Hindutva fascist expansion, as it derives its legitimacy to rule from and the support at the grassroots from these fascist bloodsuckers.

Narendra Modi and the BJP may have bad mouthed the Islamic theocratic style of rule followed in the reactionary reign of Gulf monarchies to kindle the prairie flames of Islamophobia among the upper-caste Hindus, but when it comes to their style of ruling and the deeds of their flag-bearers, they show no sign of difference with the regime of Taliban in Afghanistan or the Saud monarchy in Saudi Arabia. Probably it’s one of the reasons that Narendra Modi was awarded the highest civilian award of Saudi Arabia, called the Order of Saudi Arabia.

Though for decades the BJP and the RSS accused the Congress of being despotic, their own record surpasses the crimes committed by the Congress. Even if we don’t count the number of people the saffron camp killed since 1945, even we exclude the heinous massacres and genocides of Muslims committed by the footsoldiers of the RSS during the partition, in Jammu, in Nellie, in Meerut, during and after the Babri Masjid demolition, in the Gujarat pogrom of 2002, during the Muzaffarnagar pogrom of 2013, the record of the saffron camp is still more terrifying and blood-soaked than that of the Congress.

The biggest difference between the Congress and the BJP lies in the way each deals with the crimes their regime commits. While the Congress tries to whitewash its crime and doesn’t flaunt them as glorious achievements, the BJP and the other Hindutva organisations that work in tandem with it, officially and unofficially, doesn’t want to veil their grotesque fascist appearance, rather they want to establish that terrible form as the normal, as the one that people should obey and prostrate to. It is the reason that Gauri Lankesh and other dissidents are killed, Suraj Pal Amu is given freedom to issue threats with impunity and the Hindutva mobs are allowed to kill Muslims anywhere they want.

Contrary to the liberal camp’s belief, the RSS and the BJP would not shy, due to criticism, to flaunt its muscles, guns and the notorious grin after deriving sadistic pleasure from repressing the downtrodden people, the oppressed communities and the dissidents. The more the fascists will taste the blood, the more they will grow ferocious and the more they will launch attacks against the people and those who stand by the people. This is their character and the course of politics. The only way out of this menace is not through debates, discussions or discourse with the BJP or the RSS, rather through resistance, through democratic struggles that can bring forth real change.

The upsurge in violent attacks against opponents, dissidents and the unapologetic threats issued from public podium by the BJP and the Modi government’s cohorts, show that the crisis has ripened in the quarters of the ruling clique and it’s high time for the people of the country to plunge into a nationwide resistance struggle with an aim to end the reign of Hindutva fascism. It’s not the parliamentary opposition and their hollow phrase-mongering that will emancipate the people from the claws of the communal, bigot, fascist RSS-led Hindutva kingdom, epitomised by Narendra Modi’s rule; rather, it’s the people themselves, who can defeat the fascist bandwagon and win victory in the struggle for democracy and freedom.