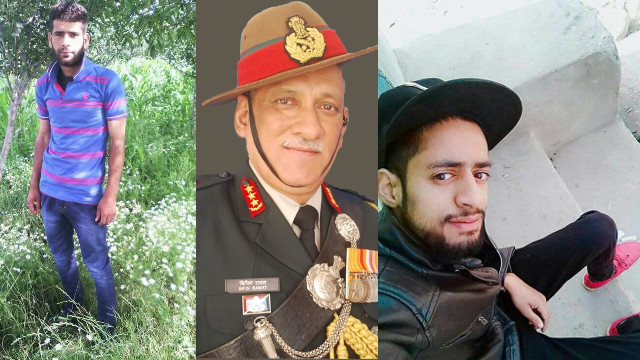 On Saturday 27 January, the Indian Army personnel opened fire at a peaceful protest of the Kashmiri people in the Ganowpora village of South Kashmir’s Shopian district and killed two young students. A class 12 student Suhail Javid Lone, son of Javid Ahmad Lone of Ganowpora, and an undergraduate student Javid Ahmad Bhat, son of Abdul Rasheed Bhat of Balpora village, became the latest young victims of the Indian state’s repressive rule in Kashmir. Along with them, nine more people suffered serious bullet injuries due to this firing. The injured are now admitted to a Srinagar hospital. There are unconfirmed report claiming that another victim, Rayees Ahmad Ganie, succumbed to his injuries, while he was taken to Srinagar from Shopian.

As usual, the Indian mainstream media, controlled by the corporate houses that fund Narendra Modi’s regime and the Hindutva camp, kept acting as the loyal parrot of the state machinery and amplified the ventriloquism by the Indian ruling classes on this gruesome killing in Shopian. The mainstream narrative of the corporate-controlled India media showed the Shopian killing a retaliation of the army to quell a stone pelter mob and to save an officer from their grip. No questions were asked by the media for the sake of “patriotism” and “nationalism” defined by the Sangh Parivar. After all, in a quasi-democracy, questioning the army is considered as secession.

The people of Ganowpora saw the burial of a Hizb-ul-Mujahideen militant on Thursday, 25 January, after he was killed by the armed forces. They placed banners to commemorate his death and while an army convoy, in two fully bulletproof vehicles, was passing the village around 11:00 am on Saturday, the army men came out to remove the banners. However, when the people of Ganowpora opposed them, they left hurriedly only to return at 3:00 pm with more men and guns. When these army men returned to remove the banners, the local people gathered there and started protesting, raising slogans against the oppression meted out to the Kashmiri people by the army of the Indian state. This irked the army men and they started indiscriminate firing at the unarmed civilians, killing two and injuring few more.

According to the eyewitness account, it felt like the Indian Army has come with an agenda of a massacre when it started indiscriminate firing. The incidents of the past frightened the villagers as they ran for their lives, while Suhail and Javid laid there in a pool of blood. The two students, just before their death, went to offer condolences to Abdul Rashid of Ganowpora, whose son was killed in a gunbattle with the Indian forces at Choeigund-Adoo village of Shopian. Now the people are visiting the houses of Suhail and Javid in large numbers to offer their condolences to the parents of the victims. Their brutal, cold-blooded murder by the Indian armed forces has sparked a rage of fury throughout the valley and it forced the government of Mehbooba Mufti, the puppet of Narendra Modi, to impose restrictions in Srinagar and clampdown on internet services to disunite and disconnect the people.

As a hogwash measure to deceive the people, the Mehbooba government’s police have filed an FIR No 26/2018 PRC under sections 302 (murder), 307 (attempt to murder) and 336 (endangering life) against the army unit involved in the killing of these two boys. Mehbooba Mufti has also ordered a magisterial probe into the incident. However, unlike the past, the people of Kashmir cannot be fooled anymore with such tricks that actually aim to protect the Hindutva fascist regime’s unbridled tyrannical rule over the people of Kashmir. They have shown their despise against the Mehbooba Mufti government’s doomed efforts to fool them and have demanded in one voice their support for the strike called on Sunday 28 January.

The Jammu and Kashmir government’s half-hearted measure of filing an FIR found a kicking response from its own MLA, when the BJP’s Nowshera legislature, Ravinder Raina, criticised the government for attempting to press charges against the army. Raina said to the media that the army enjoys impunity under the AFSPA in Kashmir and hence no FIR can do any harm to the force. The BJP and the RSS seemed visibly happy that the army killed the two young students and the death of these youth could be used to fan communal tension in India by blaming them of being Jihadis sponsored by Pakistan.

The army issued a statement full of contradictions and discrepancies, which the Indian mainstream media propagated uncritically to please their masters, the government and its corporate sponsors of Indian and foreign origin. The army in its defence claimed that the local people started pelting stones at its convoy when it reached Ganowpora from Balpora, the divisional headquarters of the Rashtriya Rifles. It said that the people of Ganowpora formed a mob and tried to lynch a Junior Commissioned Officer (JCO), which forced the men to open fire at the mob.

However, from this very statement, a lot of questions arise, like how could a group of stone pelter enter into the bullet-proof vehicle in which the JCO was supposed to travel? and how could they drag him out in front of his men? The number of stone pelter youth swelled suddenly from 100-150 to 200-250, while the entire Ganowpora youth didn’t even assemble there at 3:00 pm on Saturday. The loopholes in the army’s theory were not picked and questioned by the corporate media and the social-media savvy liberal democrats who love to question the Modi government over the lynchings of Muslims in India, but remain, mum, when the army kills innocent civilians in Kashmir valley. Shopian didn’t break the prevailing silence.

Taking cue from the situation, when Mehbooba Mufti pleaded with Nirmala Sitharaman, the BJP leader and India’s Defence Minister, to look into the case, General Bipin Rawat was asked to clarify the BJP’s position by the Modi government and the general, who mostly behaves like an RSS spokesperson, made a press statement, saying that the situation in the valley doesn’t permit the removal or modification of the AFSPA and the provisions of the draconian colonial law is still required to execute the army’s various operations in the Kashmir valley. A sheer cold-blooded shrill threat to the proponents of democracy and freedom in the Kashmir valley, by clarifying in unambiguous terms that the Indian state will rule the people of Kashmir only with its military might and several more Shopian-like killings will take place to ensure the absolute subjugation of the Kashmiri people to the Indian state machinery and its ruling classes. Like other generals and bureaucrats of the past, General Rawat is surely booking a slot in the highest echelon of power in the Modi-led Hindutva regime.

The isolation of Pakistan in the international community due to its thriving Salafist terrorist industry and religious bigotry fuelled by the growth of the CIA-funded and Wahhabi Saudi Arabia-managed fundamentalist network, has provided the Indian ruling classes a defence-less goal post of the opponent, where it can kick-in absolutely anything and the US and its lackeys will throw their support behind India, as the rulers of India offer a bigger and lucrative market, cheaper labour and absolutely free reign to plunder mineral and natural resources of the country to the big foreign corporations than what its Pakistani counterparts can offer or have to offer in their kitty.

Using the strong nexus between itself and the US and Zionist Israel, the Indian ruling classes now want to establish the Zionist-model of settler colonies in the Kashmir valley. The Modi regime wants to send their own people from the upper-caste, vegetarian and strongly Brahminical North and West Indian elites and upper-middle class to set-up colonies in the Kashmir valley. To make these settlements possible, it’s imperative for the Indian ruling classes to carry out large-scale ethnic genocide in the valley and with Narendra Modi at the helm, this task has become surprisingly easy as the dosage of RSS-made “nationalism” will be enough to keep the decision-making middle-class and upper-middle class urban Hindus to see the future genocides as “achievements” of the Modi-led Hindutva regime against “Islamist Jihadist threat” to India’s existence.

Shopian killing is a signal that in the coming days of 2018, the state-sponsored violence will see a massive rise in the valley and more people will be persecuted jointly by the oppressive regimes of Modi and Mehbooba. There needs to be a large-scale people’s movement in the Indian cities and towns against the killing of innocent people in Kashmir valley by the Indian forces. Unless the democratic and progressive voices fighting against Hindutva fascism in India and those fighting for their right to self-determination in Kashmir are merged to form a greater and valiant united struggle against the Hindutva fascist rule, the peril of genocide will hang on the heads of both Kashmiris and the Indian oppressed people. Strong movements are necessary as the barbaric killing of two students in Shopian cannot be allowed to happen again in the future.