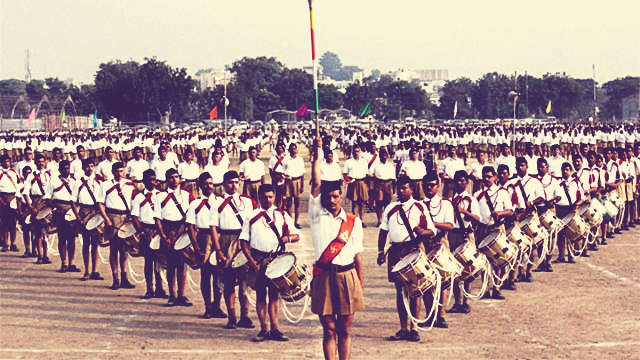 The RSS, VHP, Bajrang Dal and other Hindutva fascist outfits organised a massive rally in New Delhi on 9 December demanding parliament’s winter session to pass a law and clear the roadblocks in the building of a Ram temple in Ayodhya, at the very spot where the 15th-century Babri Masjid (mosque) once stood. These Hindutva outfits organised their rally by hiring rambunctious hooligans from neighbouring Uttar Pradesh and Haryana, along with a large number of poor villagers ferried to Delhi with the promise of money and food.

This whole show was organised to quell the misgiving that has gripped the entire corporate-controlled mainstream media that the Ram Mandir agitation of the Sangh has no takers, especially after a flop show by the VHP and other RSS affiliates, over the same issue at Ayodhya recently. The rally for the Ram temple was also organised to assert the ruling BJP’s muscle and money power just as the crucial assembly elections got over and the country started proceeding towards the much-awaited 2019 general election, which Narendra Modi wants to win under any circumstances.

On 29-30 November, more than 100,000 farmers marched to Delhi to raise the demand for a 21-day-long special joint session of the parliament to discuss their issues, especially the issues like rising burden of agricultural loans, rising prices of farm inputs, falling real price of crops at different markets, worsening condition of the women agricultural labour, rising price of diesel, shrinking of the MNREGA opportunity, etc.

This rally shook the Modi regime as it showed that due to the ripening economic crisis, its Hindutva polarisation drive is failing to hold back the farmers under the fabled umbrella of a ‘golden Hindu rule‘. It showed that the RSS’ effort to keep the economic issues at the bay and intoxicate the poor Dalits, OBCs and tribals with the mirage of a Ram temple and supremacy over the Muslims and Christians has backfired severely, if not lethally yet.

Though Narendra Modi took the escape route by fleeing to Argentina’s capital Buenos Aires during the height of the farmers’ march, which trampled upon the Hindutva fascist camp’s leitmotif revival tool- Ram Mandir, his parent organisation, the RSS didn’t take it lightly. The farmers raised their voice and fist demanding an end to tyranny, communalism and unapologetic corporate appeasement by the government and threw a serious challenge to the Sangh leadership over their hold on the Indian poor, which frightened the Sangh.

The RSS found that Narendra Modi’s crass populist propaganda to hoodwink the poor into believing that he stands by them, is failing and it felt the need to build up an alternative to take away the wind from the sail of the farmers’ movement which carved a deep impact even among the urban middle-class, whom the Hindutva camp has made its principal vote bank by dangling the carrot of development and opportunities.

For the RSS, the issue of Ram temple at the spot of the Babri Masjid, which was razed by its goons, is a very crucial issue to revive the Hindu population’s faith upon Narendra Modi and the BJP. The warcry for a temple of Rama at the spot of the demolished Babri Masjid actually evokes a lot of jingoism among the common Hindus of north and west India. The brainwashed people, fed with rancid bigotry and prejudices doled by the saffron rabble-rousers to cajole them into the Hindutva fascist bandwagon, forms the pawn battalion for the RSS and its progeny.

Even after losing on all fronts, including the crucial economic front, over promises, the RSS believes that the only reason a large number of Hindus will vote for the BJP is the relentless violent attacks on Muslims, literally and metaphorically, through the Hindutva fascist terrorists and the state machinery’s policies, which has thrown the already-marginalised community to the verge of socio-economic ostracisation. This zealotry and bigotry that the RSS’ different offshoots spread for decades, is paying a better dividend now, more than ever, thanks to the unchallenged rule of neo-liberal economy, which is carefully taking the crumbs of ‘development’ to a chosen few only, leaving the society lurching for its own share.

Feeding to that communal sentiment, the RSS keenly upholds the issue of a Ram temple, which, according to it and other Hindutva fascist outfits, will correct a historical wrong- the purported subjugation of Hindus to Muslim rule. Through its distortion of history, absolute reliance on bush telegraph and amplified zealotry, the Sangh Parivar has toxified millions of brains and made them believe that the Muslims are neither Indian nor friends to the Hindus, a reason why, the latter must fight against the community and enslave it by establishing a Hindu Rashtra, i.e. something like a Hindu Pakistan, Israel or Saudi Arabia.

As the Modi government will approach its final battle of existence in April-May 2019, it will intensify the communal vitriol against the Muslims and will use the community as a punching bag to build up a communal frenzy so that the voters can be polarised. The challenge before the Narendra Modi government is to increase its total vote tally and thereby achieve a moral high ground to have its next set of monstrous policies implemented.

It will be a grave error to think that the Modi regime can be defeated with the help of mere elections at a time when both the government and the Sangh Parivar have exerted great influence over all Constitutional institutions required for a balanced rule by planting Hindutva puppets at their helms. The Election Commission, which is now infamous for its naked connivance with the BJP and the Modi regime, will certainly not let this government fail. They will do all possible EVM tampering to have the Hindutva camp ride the chariot of justice.

To defeat this Ram Mandir agitation, Hindutva fascist mobilisation and to bring down the Modi rule, it’s imperative to build up people’s democratic struggle against fascism, bigotry and their sponsors- big feudal landlords, the big comprador capitalists and the foreign monopoly and finance capital. To build up such a people’s struggle, a people’s representative force, i.e. a political party that can play the vanguard role and also develop a mass line that best suits the Indian scenario, must be built and strengthened. Hindutva fascism is wary of the joint struggles of the working class and the farmers, and in case a vanguard force unites these classes to wage a fierce struggle against the Hindutva fascist Modi regime for democracy, secularism and freedom, then no power can prevent the downfall of this tyrant regime and doom its efforts to instigate communal violence over the Ram temple issue.