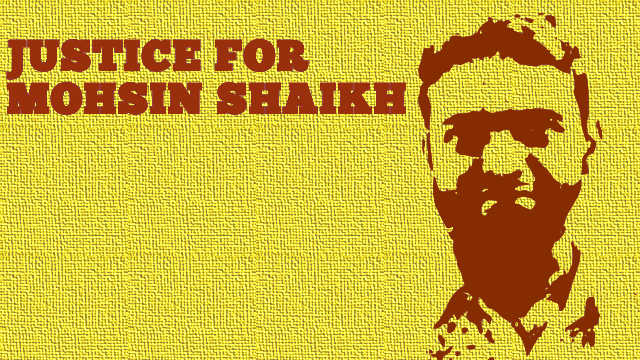 Mohsin Shaikh, a 28-year-old techie from Pune who was killed by a Hindutva-incensed feral mob on 2 June 2014, didn’t become a household name in the secular and anti-fascist camp as Mohammad Akhlaq, Pehlu Khan, Junaid or Afrazul Shaikh.

The reason was the little importance given to the story of his brutal lynching in Pune soon after Narendra Modi’s ascension to power, as the media’s focus was entirely on what the new government was saying, doing and promising. Thus, the first official Muslim victim of communal mob lynching in Modi-fied India remained unnoticed for a long time.

The mob violence, in which Mohsin Shaikh was lynched, was unleashed by affiliates of the Sangh Parivar and the Shiv Sena who were protesting a so-called ‘insulting post’ on Hindutva fascist rabble-rouser Bal Thackeray. While being lynched, his cry for help went unheard amidst the loud cacophony of Hindutva sloganeering. His battered and frail body lied in a pool of blood and slowly Mohsin Shaikh bid adieu to this world while the city he lived in overlooked his corpse.

The gruesome lynching of Mohsin Shaikh began the series of anti-Muslim mob lynchings of India, which flourished in the next few years under the patronage of the Modi regime and its servile, Hindutvafied administration at all levels. Mohsin Shaikh became the gate through which the boisterous mob entered the Indian political scenario, lynching Muslims wherever they could lay their hands on them.

Though the initial police investigation arrested 20 people and pressed charges against them, the prolonged legal battle with the powerful Hindutva terrorist lobby was something that Mohsin Shaikh’s father couldn’t continue for a long time. The judiciary had no words of consolation for the ailing father of Mohsin Shaikh. After running pillar-to-post to receive justice for his son, the Senior Shaikh too lost his life due to heart disease in 2018, ironically the same year when the alleged killers of his son got an easy bail from the Bombay High Court.

While granting bail to the accused, the Bombay High Court found that the religion of the victim provoked the accused to commit the crime. This was an unprecedented analysis, which found many takers in a India. The religion can provoke people to kill others and that it can be a ground to grant bail to someone, was unheard of. Yet, things that were supposed to surprise people didn’t any more, as the new India, ruled by a bunch of arch-reactionary men and women, didn’t leave much scope for surprises.

Long after granting bail to many accused of the case, the Bombay High Court recently granted bail to Dhananjay Desai, the leader of Hindu Rashtra Sena, a little-known yet utmost pugnacious organisation. This blow came within a month of Mohsin Shaikh’s father’s death. The bail of Dhananjay Desai will help his campaign vigorously for the BJP in the forthcoming general election and use his own incarceration on a murder charge as bait of victimhood to appeal to upper-caste Hindu voters of Pune.

Rather than building a strong case against such killers incensed with Hindutva fascism, the Maharashtra Police is busy investigating a purported plot to ‘assassinate Narendra Modi’ by the so-called ‘Urban Naxal’ force, which is helping Narendra Modi to plead victimhood and blackmail the people using the Hindutva rhetoric to win the 2019 general election. The Maharashtra Police successfully concealed the investigation into the Hindutva terror network which it busted in September 2018 and the ‘Urban Naxal’ rhetoric has overlapped it with extreme publicity and propaganda.

Under such a complex web of ironies, propaganda and political mileage-seeking exercises, the murder of Mohsin Shaikh and his father’s death while chasing pillar-to-post seeking justice for his murdered son will remain as grotesque reminders of India’s gloomy existence, the precarious situation of its minority communities and the gradual extinction of the vestiges of democracy and freedom promised by the Constitution. Mohsin Shaikh will remain unknown and unspoken about, as he is just another lifeless Muslim lying in the pool of blood in Modi-fied India.