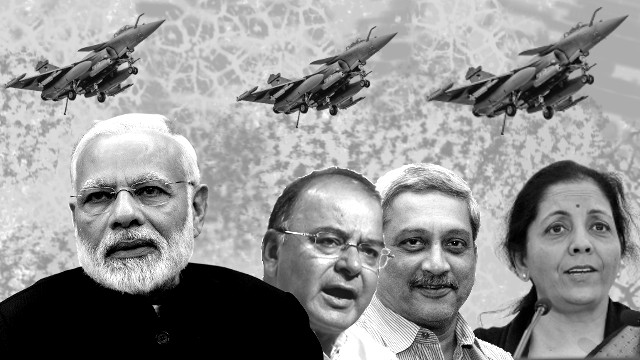 After claiming in the Supreme Court on Wednesday, 6 March 2019, that the Rafale Jet deal’s crucial and top secret file was stolen from the Ministry of Defence, Attorney General KK Venugopal on Friday, 8 March, claimed that the file wasn’t stolen but its photocopies were leaked outside, which reached The Hindu‘s journalist N Ram. He published an investigative report on the Rafale Jet scam in the newspaper, which showed the revised Rafale Jet deal has got €246.11 million costlier vis-a-vis the original deal concluded by the UPA.

Citing the report of Ram in The Hindu, former BJP leaders Yashwant Sinha and Arun Shourie, lawyer and activist Prashant Bhushan, filed a PIL in the Supreme Court asking it to revise its December 2018 order that rejected the various PILs filed demanding a CBI enquiry into the scam. The petitioners urged that the government has, visibly for anyone with knowledge of English, duped the apex court in its earlier presentations, as it changed its wordings in the affidavit presented before the court, changing the grammar and the meaning of the sentences after the verdict was delivered.

The sudden volte-face on the Rafale file theft can have two possible explanations — firstly, the government realised the difference between original and photocopied documents on Thursday, 7 March, or it has been uttering lies incessantly at the apex court to misguide it — and neither of them is good for its credibility. Why did the government earlier declare that the file was stolen from the defence ministry? Isn’t theft of such crucial files from a ministry entrusted with the task of securing the country a major security threat and questions the credibility of the Modi regime? When exactly did the government realise that the file wasn’t stolen but photocopied? Did the government file any criminal case against insiders in this case if it has violated the Official Secrets Act? Will Defence Minister Nirmala Sitharaman face the consequences for the lapse in her ministry?

Such questions will never be answered in Modi-fied India, where the BJP stalwarts are claiming that the “country is in secure hands” by galvanising Prime Minister Narendra Modi’s masculine image as a protector of the Hindus but at the same time, the government’s attorney general is claiming that a file was stolen from under-the-nose of the government. Isn’t this paradoxical like the entire Modi regime? Isn’t it a serious challenge to Indian national security that a man is hyped as a superman prime minister even when paramilitary soldiers are killed due to security lapse in a highly militarised place like Kashmir or when top secret files of the government are allegedly stolen from high-security complex like the defence ministry? Or probably, the government wants to maintain silence as the files could’ve been in the bedroom of the ailing Goa Chief Minister Manohar Parrikar, as accused by the Congress chief Rahul Gandhi!

The attorney general is arguing that Ram’s article and facts cited in it shouldn’t be accepted by the court as the details were, as per him, cited from a stolen file and thus, it violates the colonial-era Official Secrets Act. The attorney general tried to influence the apex court to force Ram to divulge his source, a harakiri in the field of investigative journalism. However, the attorney general didn’t affirm that the entire data presented by Ram is wrong or the figures used to reach the estimates are botched up like the employment data that Modi is trying to peddle as authentic.

Forcing Ram to disclose the source of an investigative report is an anti-democratic act by the Modi regime, like many more it undertook in the last five years. The INS has rightly objected to this undemocratic act of bullying an investigative journalist. A journalist can get news from crucial sources only when assurance of anonymity and safety is provided to those who risk their careers or lives to bring out information that helps in exposing scams. The Modi regime must be contented with one universal truth — the sources divulge information, especially about government scams, knowingly and voluntarily to investigative journalists due to an internal contradiction within the government’s apparatus and it happens when certain honest officials can’t console their conscience after finding out large-scale scams taking place before their eyes while they are officially rendered helpless and powerless.

The Rafale Jet scam can’t silently die at a corner before the Lok Sabha election even if the Modi regime tries hard to cover it up with jingoistic fervour, militant Hindutva chauvinism or by blaming India’s first prime minister Jawaharlal Nehru for the theft of the Rafale deal file. Though the entire Sangh Parivar jumped into the fray to save Modi from the Rafale Jet scam accusations and they have been citing the apex court’s December 2018 order as evidence of Modi’s innocence, it will not be possible for them to safeguard the regime’s imminent fall through propaganda when their own attorney general and the entire law ministry is involved in such embarrassing faux pas.

It’s clear that the Modi regime will keep on influencing the Supreme Court on the Rafale Jet scam by exerting pressure; however, at the end of the road, it will be impossible for the BJP and Modi to achieve salvation from the Albatross around their neck. Their frustrated attempts at burying the scam actually dug out skeletons that they never wanted anyone to see; now the same attempt is bringing up comical excuses and B-grade thriller stories about the photocopied files smuggled out of the defence ministry. It can be well anticipated that in the days to come the Modi regime will stoop to the nadir of moral and story-telling bankruptcy by displaying more desperation in its attempts to stop the opposition from capitalising on the Rafale Jet scam’s nitty-gritty.