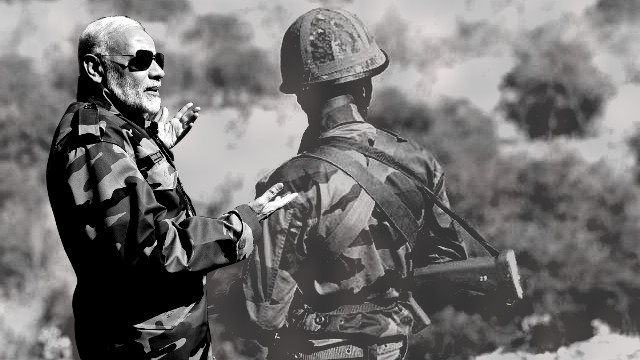 Arindam Dutta Chowdhury, an IPS officer, lost his right hand due to a bomb hurled at him by the RSS-led Hindutva fascist camp’s hired thugs in West Bengal’s Raniganj on 26 March 2018, when a Ram Navami procession was used as a ploy to trigger a massive communal riot in the area in order to polarise the Hindu voters. Chowdhury’s injured right hand and the gory details exhibited in a photo showing his pitiful wounded condition that became viral on social media are stark reminders for the people of West Bengal about what future the BJP promises them.

In case one is swayed by Prime Minister Narendra Modi’s incessant election campaigning, often violating the Election Commission’s Model Code of Conduct, wooing voters to elect the BJP for the sake of the armed forces’ valour, then they must ask the prime minister why his party workers and that of its mentor — the RSS’s — attack policemen with such impunity and never feel apologetic about the crime while, manifesting a high degree of hypocrisy, selectively condemn the Maoists or Kashmiri militants for attacking police and paramilitary forces?

Dutta Chowdhury isn’t alone in suffering this affliction due to the resurgence of the Hindutva fascist camp under Modi’s rule; Inspector Subodh Kumar Singh of Uttar Pradesh Police, now under the command of Hindutva fascist thug Yogi Adityanath, was brutally killed by the Bajrang Dal and RSS goons in Bulandshahr, when we went to control a riot over allegations of cow slaughter. Singh’s bullet-ridden dead body was a grotesque reminder that the Hindutva fascist menace will leave no one unscathed and sink every silent observer in the gutter of sheer fascist virulence and macabre atrocities.

Dutta Chowdhury is a Hindu by identity but that didn’t stop the crude bomb from exploding. Singh was a devout Hindu who didn’t subscribe to communalism, as per his son, and had been the investigating officer of Mohammad Akhlaq’s lynching case — the first major beef-related mob lynching case in Modi-fied India — for which he had to suffer retributions from the communalised police force’s top brass. The identity of these policemen didn’t shield them from the assailants. Their devout Hindu identity didn’t stop the self-styled champions of Hindu rights from attacking them with the intention to kill.

Even though the BJP and the RSS’s doctrine eulogises all men in uniform, and strongly believes in turning India into a police-state, Modi and his coterie are unsurprisingly silent on the issue of these two policemen, one killed and another injured. Modi and his sycophants will also never allow a free and fair investigation into the murder of Hemanta Karkare, the former Maharashtra Anti-Terrorism Squad officer who was killed during the 26/11 attack in November 2008, soon after he unearthed the largest Hindutva fascist terrorist network so far. Neither Modi nor his lackeys would ask why a BSF man was terminated for revealing the fact that the paramilitary men deployed at the border are fed the worst food that human beings can eat?

This sheer hypocrisy of the Modi regime exemplified in its selective eulogising of soldiers and policemen whose death can help the RSS and the BJP to carry out communal polarisation and show utter disregard to or cover up those deaths that may cause embarrassment to it, shows how the Sangh Parivar’s military worship doctrine is a hollow, self-contradictory and a heinous doctrine. Those who support the brutal state repression of Kashmiri youth demanding their right to self-determination, will never unequivocally condemn those of their own men hurling bombs at police stations and government properties in the southern state of Kerala. Those who create a nationwide uproar and rampage over the killing of 44 CRPF men in Pulwama due to their own government’s failure are often found rejoicing the death of policemen killed by their men in action. This is the true and unambiguous character of the RSS-led Sangh Parivar, of which the BJP is an integral part.

It’s quite infantile to hope that the police personnel or those of the army and paramilitary will assert themselves and condemn these actions of the Modi regime due to the complex caste and class rule that’s perpetrated within these organisations and as the writ of the Hindutva fascist camp is always at the towering height. The collaboration of top officials of the armed forces, police force, bureaucracy and intelligence agencies with the Modi regime and the BJP has ensured that no resentment, no political dissent is tolerated within these forces and any person with the slightest anger against the government’s policies is swiftly neutralised either by transfers or through other punitive measures. The only way out of this crisis-ridden system, where the policemen, paramilitary or armed forces’ men and women will be pushed to the death zone to appease the blood lust of the ruling party’s stalwarts, is the growth and expansion of massive people’s democratic struggle against the injustice meted out to the common people, against Hindutva fascism, corporate loot and plunder, and unbridled corruptions taking place under Modi.

The honest and democratic sections of these forces must come out to support the people because if they don’t assert their political right today, tomorrow they may find themselves at the verge of death; the very death that will provide “nationalist” ammo to the BJP and Modi. When people cast their votes, they must remember Arindam Dutta Chowdhury, Subodh Kumar Singh, the unfortunate soldiers onboard of the An-32 flight to Andaman and Nicobar Islands that was never found by the Modi regime after it was lost in 2016, and many such unnamed soldiers who died due to the policies of the Hindutva fascist regime that push more and more youth — who join the armed forces, paramilitary forces, the police only because they’ve no other career opportunities available — towards death and injury every day. If Modi and the BJP are asking people, especially the first time voters to vote on the basis of Balakote, then they should also vote on the basis of these heinous cases for which no Hindutva fascist thug ever got punished.