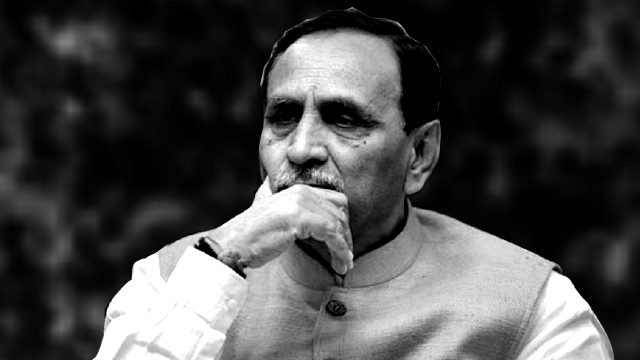 Gujarat Chief Minister Vijay Rupani is showing the relevance of Karl Marx’s historic observation in the Eighteenth Brumaire of Louis Bonaparte: “Hegel remarks somewhere that all great world-historic facts and personages appear, so to speak, twice. He forgot to add: the first time as tragedy, the second time as farce.” even at present. His recent assertion that the 17th Lok Sabha election of 2019 is actually a battle between India and Pakistan, and in case his boss, Prime Minister Narendra Modi, loses the election, then fireworks will take place in the neighbouring country. He clearly reiterated the words that his party boss — Amit Shah — uttered during the 2015 Bihar assembly election. Shah claimed then that if the BJP loses the election in Bihar to the RJD–JD(U)–Congress alliance, then Pakistanis will celebrate the loss with fireworks. Thousands of memes and cartoons of Shah and Modi were circulated after the BJP lost the assembly election to the former coalition.

Rupani’s reference to the same pathetic conclusion, for which his obnoxious boss faced ignominy, has nothing to do with the lack of materials for the BJP to build up its case while facing a high tide of anti-incumbency wave during the election. It’s rather a very cunningly designed narrative that’s been used repeatedly to drive home a point that the opposition parties are agents of the neighbouring state. This assertion, through repeated broadcasting to catch and captivate the public imagination and create a new optics about the existing political scenario, is all set to position the BJP and its allies at a better position vis-a-vis their competitors in the electoral race. How would this assertion help the BJP in garnering votes?

The BJP’s main vote bank consists of the upper-caste Hindu middle class and elites of urban India, who are gullible to any kind of well-drafted propaganda around Islamophobia. This was the class and caste block that voted the BJP to power in the 2014 general election. Out of 814.5 million voters, 66.38% or 540.66 million voters cast their votes in the 2014 general election. Around 31% of the 540.66 million voters, or 167.60 million people, voted for the BJP after being mesmerised by the promises of “Acche Din”, Gujarat Model of development (codenamed Vikas by Modi’s marketing management team), bringing back black money from foreign shores, and the deposit of Rs 1.5 million to each poor person’s account from that black money. Ironically for Rupani, the BJP stopped uttering about the much-hyped Gujarat Model of development soon after Modi left for his New Delhi mission. Even during the bitterly contested Gujarat assembly election in December 2017, the BJP and its star campaigners like Modi and Shah refrained from citing the Gujarat Model. They didn’t utter their 2014 cliché of development aka Vikas that promised an overall development of India and Indian people irrespective of their identity. Why this avoidance? What’s troubling the BJP and Modi’s sycophants like Rupani from talking economics?

In the last few weeks, before the election dates were announced, Modi tried his hands in attempting a damage control measure by entering the foundation stone-laying spree for a host of projects, which he and the BJP claimed will be operational by 2022. There’s nothing in the kitty of the BJP that it can claim as its pure achievement in the last five years, except for gory atrocities against the minority communities, Dalits, tribal people, the Kashmiri people, except for its shameless corporate appeasement policies that helped the big crony-comprador capitalists like the and the Ambanis, except for the disastrous economic gymnastic with policies like demonetisation and GST, except for the perception management through creating an illusion over a purported military victory against Pakistan.

Now as the development mask is torn, now that the poor people of India has seen how Gujarat fares worst in Human Development Index, now that the poor tribals of Gujarat saw that despite their years of resistance and opposition to the ecologically dangerous Sardar Sarovar project, the Modi regime pushed it to completion, causing the submerging of numerous villages and eviction of thousands of poor people. The black balloons let loose by them on the sky during the fateful occasion of the killer dam’s inauguration, weren’t mere tokens of opposition, but blisters of dissent against the narcissist prime minister and his party that took away the land, forests and livelihood of the people. Rupani knows, after seeing the Modi regime performing as the personal business development agency of the Adani Group and both houses of the Ambanis, its heinous role in brokering a multi-billion dollar aircraft maintenance deal for Anil Ambani’s Reliance Defence, there will be not only a dearth of rural votes this time but even a section of the BJP’s traditional vote bank in urban Gujarat will drift away. The only Gujarat model that can prevent erosion in this vote bank is a replication of a massive anti-Muslim 2002 or the fear-mongering around the best punching bag the RSS and the BJP has been using — Pakistan.

The more the BJP will use anti-Pakistan jingoistic rhetoric, chauvinistic fervour and Islamophobia to appeal for votes, the more they will exemplify how on the political, economic and general welfare fronts, where Modi promised major changes, the party has no real, credible achievement in its kitty. When the chief minister of a so-called model state like Gujarat will resort to India-Pakistan rhetoric to woo voters by giving up the Vikas talk, the development promises, then it’s officially an acknowledgement that it’s only the card of jingoism and vitriol and nothing else that the BJP will vigorously play to win a majority and defeat the opposition in the arithmetic of parliamentary politics.