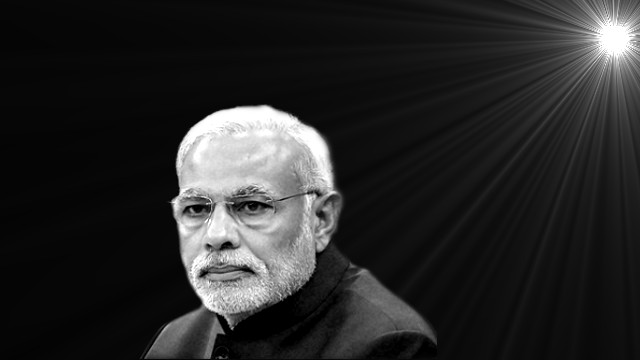 In the last week, Prime Minister Narendra Modi appeared in two media interviews, his latest in the spree to market and promote himself through scripted and well-rehearsed interviews. However, there was a break from the hitherto mundane practice of Modi appearing only in interviews with his toady media outlets, where television show hosts would masquerade as journalists and then ask him questions that cryptically eulogise and extol him to the level of a demigod. For the first time in his tenure as prime minister, Modi appeared for a subtly critical interview conducted by two journalists of the Indian Express group, which, for the first time, asked him questions regarding his government’s performance in the last five years; the interviewers raised most of the questions, if not all, that he had tried to avoid all these years.

Modi appeared for an interview with representatives of a television channel last week, where he was seen telling the interviewers that he told the Indian Air Force (IAF) to launch the Balakote “surgical strike” on a particular day even though the IAF personnel were not ready due to bad weather. Modi said, he insisted for the raid citing the clouds, which he claimed would protect the planes from being detected by the radars. The IAF obliged. In this interview to the television channel, which has been promoting the Hindutva fascist agenda quite subtly, the prime minister also showed his “handwritten” typed poems, which he claimed he had himself composed, with the television camera zooming to show the audience the content. A classic yet poor exercise to catapult the prime minister to the level of an erudite. The entire interview smelled rotten, especially with the ridiculous attempts made to enchant the audience with Modi’s purported abilities and intellect, which are nowhere to be seen in real life.

However, Modi appeared harsh, irate, angry and aggressive while speaking to the Indian Express group, taking potshots at the group’s ethos of journalism and criticising it for not criticising the Congress party, which is not in power since the last five years, instead of focusing on Modi’s failures. The shrill diktat in a coarse tone, asserting Modi’s uncouth and crass nature, warned the journalists that Modi has no concern for what the opposition or the fast-shrinking critical media think about his government because he has the magic wand that can be used easily to stamp his opponents and critics as “anti-national”. Once declared “anti-national”, any politician or journalist will have to live in the mercy of his boisterous followers, who can not only spread vitriol against them but can also attack and kill them, at times, with utmost impunity.

The divider-in-chief of India, whose reign saw the society being fragmented, polarised and pitted into antagonistic camps on the basis of religion, caste and ethnicity, thumped his chest and called himself a self-made man, while all his life he has been lap-dancing the Ambanis, Adani and their ilk, riding their planes and helping them with business contracts, often at the cost of public sector units (PSUs) or at the cost of the public exchequer. Being the megalomaniac dictator, Modi has survived his political career by serving the crony-comprador capitalists, their foreign imperialist masters, and he has built an ecosystem where all industries with the power to shape public opinion have shown utmost servility and obeisance towards his politics. From the Hindi film industry to the media world, Modi has turned almost all of the influential heads into his bootlicking agents. Thus, unlike the Indian Express interview, where he revealed his true side, he has so far behaved in a very amiable and generous fashion with the representatives of the Bollywood or his friendly TV channels who came to interview him.

Modi is indeed a self-made man, but with the help of a host of PR and image building campaigns. Modi claims he comes from a humble background but has no data or evidence to prove it. He calls himself a pro-poor politician, who actually despise the poor than anything else. If any politician has hurt the interests of the poor severely in India after independence, then it’s none else but Modi, who earlier bulldozed upon the poor of Gujarat, and is now tormenting the poor and the lower middle class with his disastrous economic policies that have caused a four-decade-high unemployment rate, a severe farm crisis, a constant fall in the industrial growth, draining of PSU resources and funds, and an overall economic crisis that’s all set to engulf India and take it back to the crisis-ridden 1970s and 1980s.

Even though he spoke about a lot of things and tried to blame the opposition for everything that has gone wrong during his tenure, Modi remained mum on his role in the Rafale Jet scam, his role in helping the Adani Group, the Vedanta Group and other big mining giants to exploit Indian resources. He never uttered a word on how his government, after milking the PSUs to fulfil the greed of the ruling Bharatiya Janta Party’s big-ticket donors, started preying upon the Reserve Bank of India’s reserves to divert them to schemes that are designed to boost the fortune of Modi’s donors.

It’s important to prevent an economic catastrophe, which Modi and his sycophants are trying to cover up by fudging data and by raising chauvinistic or communal rhetoric. This is an imminent danger, and to combat it, it’s important to look towards the bigger political struggle outside the ballot box and unite all the class forces that are vulnerable or are suffering due to the policies of the Modi regime. Looking beyond the Hindu-Muslim dichotomy that the Modi regime has been triggering to distract the people’s vigil from the burning issues, especially the unbridled corporate loot and plunder of Indian resources, the burden of exploitation and taxes imposed on the working class and the toiled people, the incessant difficulties the farmers are subject to, etc, it’s time to build up a massive people’s movement for democracy, equality, economic freedom and justice throughout the country from the grassroots. It’s time to reinvigorate the great spirit of anti-fascist struggle that the Indian people were tempered in during the fascist reign of Indira Gandhi and the Congress party.

Modi may have forgotten the experiences and teachings of the anti-emergency struggle, in which his organisation was a lip service provider, however, the common people, the inheritors of the legacy, still remember it and will certainly take the route that was traversed by their ancestors to bring down the Hindutva fascist empire despite having bruises inflicted  on their body by the defenders of the empire. An end of Modi’s fascist ideology, its strong grip on India and the chaos unfurled can be strongly dealt with only by building a strong mass struggle that Modi and his coterie have been trying to stall through their gimmicks. The arrogance of Modi, rooted in his unchecked hold on power, will be diminished by a powerful people’s struggle for democracy, secularism, equality, justice and economic growth.