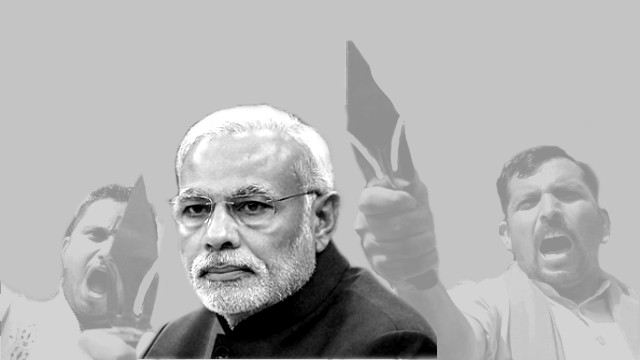 Finally, after a long wait and a spree of speculations and allegations, the 2019 Lok Sabha election results came out, without surprising those who had analysed Indian political ambience correctly. As it was anticipated, Prime Minister Narendra Modi successfully managed to retain power and thwart the advent of any anti-incumbency wave by using communal polarisation, Hindutva fascist propaganda and a jingoistic fervour over a purported Surgical Strike against Pakistan, which became his trump cards during the eve of the election.

Modi’s victory and the pathetic performance of the opposition, which could neither show up a united and alternative agenda nor put up a united fight against the Hindutva fascist bandwagon, unlocked the door to Hindutva fascism‘s uninhibited rule over India. Now, with Modi at the helm, India will become an official fascist state like Donald Trump‘s America, Recep Tayyip Erdoğan‘s Turkey, Vladimir Putin‘s Russia or Jair Bolsonaro’s Brazil. It’s merely a matter of time that the Indian state will purge the façade of liberal democracy, which the Indian ruling classes — the big comprador capitalists, big feudal landlords and foreign imperialists — have been using as a rickety chimaera of hope to keep the people aloof from any major democratic revolutionary struggle.

The Bharatiya Janata Party (BJP) and its ideological powerhouse, the Rashtriya Swayamsevak Sangh (RSS), played the crucial role in developing the narrative of a “strong Modi government” since 2014, harping upon the feudal, Brahminical, extremely reactionary and misogynist viewpoint of the majority Hindu community’s influential section — the upper-caste elites and urban middle class — so that their opinion can create a ripple effect by influencing the classes that are dependent on these for their livelihoods. So, quite epidemically, anti-Muslim bigotry, the lifeline of Sangh’s ideology, and chest-thumping jingoism spread throughout the nation and redefined the political discourse at the grassroots.

Both BJP and the RSS received funding worth billions of dollars from domestic and foreign corporations that are harping on the Modi regime’s pro-corporate measures to grab land, natural and mineral resources, and exploit the labour without worrying about regulations. Since the demonetisation exercise and the introduction of electoral bonds, Modi and his coterie have got enriched with huge flow of official and unofficial funding. The wealth of the BJP leaders, including Modi’s, swelled manifold at a time when most people of the country experienced a massive downfall in their real income and in employment opportunities.

This money played a key role in not only mobilising a large army of Hindutva-incensed thugs to trigger communal polarisation at the grassroots and spark violent clashes, but it also helped the BJP and its leadership in buying the loyalty of India’s corporate-controlled mainstream media houses, journalists, television channels, social media influencers, actors, etc, to carry out Hindutva fascist propaganda and shape public opinion.

The RSS has successfully created the narrative of a prosperous Hindu Rashtra, and at the grassroots of rural and urban India, it has successfully isolated and vilified the Muslim community as the other. Even the Dalit, backward caste Hindus (OBC) and tribal voters are polarised by the RSS and a plethora of its progeny organisations, using the weapon of Islamophobia and bigotry. It’s not just the BJP or the RSS that have played a key role in returning Modi to power, rather, it’s also the opposition that has helped the BJP to rise and consolidate power through its zero resistance policy.

In the last five years, no major working class’s or peasants’ struggle was organised by the opposition to unveil the fascist character of the Modi regime plus to build up the momentum to overthrow it. The lack of any mass movement was filled by social-media-centric, meme-based propaganda that only amused the privileged liberals but played no significant role at the ground level. This inactivity allowed the BJP and the RSS to rule the streets and shape the public opinion by feeding the gullible Hindu minds with misinformation and propaganda.

This lack of movements, a discombobulated and utmost disarrayed opposition, a severe communal polarisation that the opposition didn’t resist to appease its Hindu vote bank, and a chauvinistic hysteria over Pakistan following the Pulwama episode played the key roles in helping Modi hack the minds of the majority community’s influential decision-makers. He played with and tricked the majority community throughout India and cajoled them into believing that he alone can deliver a strong and masculine government. He made them believe that carrying out doubtful surgical strikes against Pakistan is more important than providing employment opportunities or resolving an ever-growing farm crisis.

Modi’s victory and the rise of Hindutva fascism are inevitable consequences of a crisis-ridden global finance and monopoly capital that wants to have an unapologetic fascist rule in India so that its vast resources and labour can be plundered and exploited without worrying about norms and regulations. In the coming days, there will be more assaults on the rights of the productive classes, heavier burdens of exploitation and oppression will be laden on their shoulders, heavier burdens of indirect taxes will be imposed upon the people, and all efforts will be made by the Modi regime to provide respite to its foreign and domestic masters by drawing funds from the public exchequer to bail them out of crisis.

Modi’s victory in the 2019 Lok Sabha election is a victory of Hindutva fascist propaganda and polarisation against a meek opposition that lacks a vision and isn’t serious about combatting fascism. However, this victory isn’t absolute and final. Modi, as an individual and as a leader, is a weak personality who can project himself as strong using a plethora of communication tools but can’t resolve the contradictions that are arising out of the Hindutva fascist polarisation and the unbridled loot and plunder by his masters — the big corporate houses — throughout India. Plunder, eviction, displacement, shrinking employment opportunities, farm crisis and a heavy tax loads on people will surely push the real majority — the poor and the downtrodden masses — towards desperation and that’s a point where the Hindutva fascist enterprise will start facing the brunt with the people’s anger.

The people’s struggle for democracy, equality and social justice will not revolve around the ballot boxes, as the opposition wishes, rather it will appear on the streets, factories and vast agricultural fields of rural India, which Modi and his cahoots can’t split using the RSS’s signature weapon of polarisation or suppress using its military might. It’s the very people Modi is thanking in his theatrics today, who will unhorse the emperor and cast him in the bin of history in the days to come.