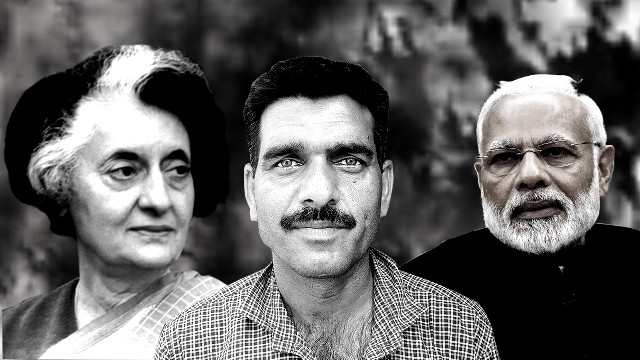 Indira Gandhi’s fall began when she was at the highest peak of her political career following the victory in the Bangladesh war. A court case filed in the Allahabad High Court, where Raj Narain, the socialist leader who was defeated by Mrs Gandhi in the election from Raebareli Lok Sabha constituency in 1971, complained of electoral malpractices. The Allahabad High Court later nullified Mrs Gandhi’s election victory and barred her from participating in polls, which panicked her and the opposition against her tyrannical regime throughout India grew stronger, resulting into the National Emergency being imposed in June 1975. Today, history, paradoxically, seems to be in the course of repeating itself, maybe as a tragedy for the modern avatar of Mrs Gandhi – Prime Minister Narendra Modi.

Former Border Security Force (BSF) soldier Tej Bahadur Yadav, who was keen to fight election against Modi from the Varanasi Lok Sabha constituency on a Samajwadi Party (SP) ticket in the 2019 Lok Sabha election, filed a complaint against the wrongful cancellation of his nomination by the Election Commission, allegedly under pressure from Modi’s Bharatiya Janata Party (BJP), by citing a trivial issue of a missing no-objection certificate (NOC) from the BSF. Yadav was given an evening’s time to go to New Delhi from Varanasi and get the NOC from the BSF authorities, who are extremely displeased with him due to his criticism of the quality of food offered to soldiers, which he made public on social media, resulting in his dismissal from service.

This abrupt cancellation of his nomination as an SP candidate became an exemplary incident to showcase the Election Commission’s servile attitude towards Modi and the BJP. Yadav complained that his nomination was cancelled as he comes from a paramilitary background and had the potential to unmask Modi’s hollow love for soldiers, in whose name he asked for votes. The entire Lok Sabha election campaign of the BJP was centred on jingoism, ultra-nationalist rhetoric and warcry against Pakistan, which can be conveniently used against the Muslims as well by equating a nation with a religion. The Hindutva fascists would’ve faced immense difficulty in fighting a disgruntled soldier who exposed their hypocrisy regarding soldiers, in whose name they were asking for votes; hence, to provide Modi leverage, the nomination of Yadav was abruptly cancelled.

Yadav’s petition to the Supreme Court was earlier rejected. In the plea to the High Court, Yadav alleged that his nomination papers were wrongly rejected and therefore, the election of Modi from Varanasi is null and void. Justice MK Gupta has fixed 21 August as the next date of hearing and has issued a notice to the prime minister as well. This development is quite a new thing in Modified India, where the prime minister and his government is provided judicial immunity by the total subjugation of all institutions to the burly Hindutva fascist enterprise led by the Rashtriya Swayamsevak Sangh (RSS) — the parental body of the BJP —- and questioning the prime minister or the government is made an unwritten crime, which could be equated with sedition.

With a notice from the court, Modi would have to respond to the controversy that his servile agents started in Varanasi and about which he showed a nonchalant attitude, as his sole goal was to increase his poll tally vis-a-vis the 2014 Lok Sabha elections, to show that he’s the popular leader of India. If Modi is to answer the court’s notice, then he needs to show causes through his battery of lawyers that will try rejecting Yadav’s plea by citing such figures and facts that are convenient for the regime. Still, this act of defending his election victory, about which questions have been raised, will inflict blows on the hallo of invincibility that’s created around the image of Modi and the BJP. It’s the RSS and the BJP that will face an ignominy when the lawyers would have to defend what the saffron camp wants people to believe as a spontaneous response to Modi’s popularity.

In the coming days, a court case over Modi’s victory from Varanasi by wrongfully cancelling the nomination of Yadav will register the fact that all was not well in the holy town; it will also register the fact that all is not well with the soldiers, serving and retired, who are made the holy and milky cow by the RSS and the BJP to be exploited to score political brownies. As a large number of disgruntled soldiers supported Yadav’s nomination in Varanasi, the court case will be a turning point for them as well, maybe the press will even voice their opinion, albeit on a huskier tone.

It’s too early to anticipate the course of the court case filed by Yadav. It won’t be proper to draw an analogy by citing Mrs Gandhi’s example due to the coincidences that exist. However, it’s absolutely a good thing that Modi is made answerable, he’s questioned about the very electoral victory, which is considered both sacrosanct and natural as per his stature in a communally polarised country. A court notice sent to Modi, due to a case filed by a former soldier, and Modi’s compulsion to respond to the same, either by sending his lawyers or by appealing in the Supreme Court, will actually trigger a discourse about the BJP’s electoral malpractices, which helped it sweep the Lok Sabha election by openly flouting all rules and regulations. This may not become the beginning of the end of the Modi regime but at least it can walk the country to a place from where common people can raise their voice against the tyrannical regime. During the reign of fascism, each act of dissent, each uncomfortable question and each act of defiance will count as a contribution towards the greater fight against fascism. Yadav’s court case and the subsequent notice to Modi are no less.