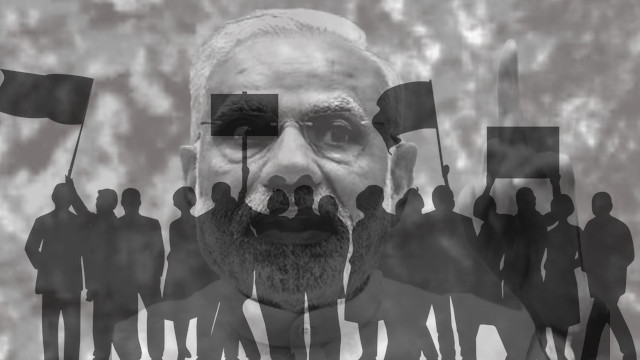 The principal problem of contemporary Indian mainstream politics and media is that both try to fix their activities around the central narrative decided by the ruling Bharatiya Janata Party (BJP) and Prime Minister Narendra Modi. The liberty and the ability to set the dominant narratives using all forms of optics and rhetoric is reserved exclusively by Modi and his coterie because the passive opposition, which is gasping for breath in its frantic attempt to stay relevant after an ignominious setback in the 2019 Lok Sabha election, didn’t care to create any narrative of its own after the Congress party’s “Chowkidar Chor Hain” (the guard, ie Modi, is thief) campaign over the Rafale Jet scam didn’t yield rich dividends in the election.

Through his arbitrary scrapping of Article 370 and Article 35A of the Constitution that guaranteed some limited autonomy to Jammu & Kashmir according to the conditions set during its accession, the Modi regime has diverted all political discourse towards Kashmir. A series of new alignments have unfolded themselves as most of the mainstream political parties of the Hindi heartland, including a section of the Congress party, stood firmly with the government and its disastrous Islamophobic agenda. Many other parties, especially the wailing parliamentary left and the Dravidian parties, though toeing the line of Indian ruling classes — Jammu & Kashmir is an integral part of India — have opposed the method through which India has declared its formal military occupation of Jammu & Kashmir.

Since 5 August, the Kashmir issue has taken the centre-stage of Indian politics and diplomacy, as the parties try to prove their “loyalty towards India” by supporting the dehumanising and colonisation of Jammu & Kashmir, especially the people of Kashmir valley, who vociferously demands Azadi (freedom) from India. From the mainstream media outlets to political parties, even those who are situated at the opposite pole of the BJP, have exhibited a conciliatory tone towards it, criticising it for only the method adopted to “integrate” Jammu & Kashmir, without questioning the Kashmir standpoint of the Indian state, which is hegemonist and expansionist in nature, at all. This subservient attitude and compromises on ideology, even by the parliamentary left, provided enough ammo to the Modi regime to show its core voter base and the majority Hindu community that it’s on the right track and there is visibly no opposition that can morally oppose its actions. Like the demonetisation trap of killing black money with a single blow, Modi played the disastrous Kashmir card to hoodwink a majority of the population that the long-standing dispute over the ownership of Kashmir is over, although without the Kashmiri people’s endorsement.

In this situation, the opposition shouldn’t have followed the lead of the BJP. The latter is merely implementing the long-standing agenda of its parental body — the Rashtriya Swayamsevak Sangh — which has followed the goal of annexing Jammu & Kashmir to turn it into a Hindu-majority region since the 1930s. However, the opposition should have capitalised on the time bomb of an economic crisis that’s ticking fast towards doom. India is heading towards a total economic catastrophe as the global crisis of imperialism is impacting its industries and employment situation. Add to this the pure economic gimmicks undertaken by the Modi regime since 2016, following the demonetisation exercise and the rolling out of the GST in 2017, which catapulted the unemployment rate to a four-decade-high, on which the government is visibly mum.

Rather than becoming an appendage of the Modi regime and tom-tomming its propaganda or aiding it through ineffective steps and by committing faux passes that bring further ignominy, the real way to oppose the Modi regime will be to expose the unfolding of an immense economic crisis that will engulf the entire country in a matter of few weeks if not months. Raising questions over the economy, over the Modi regime’s frantic attempts to distract the people from the core issues of the economy by playing the Jammu & Kashmir card, which has the potential to trigger extreme jingoism among Indian upper-caste Hindus, should have actually thwarted the Modi regime’s obnoxious agendas or could have instigated a people’s movement against the crippled economy.

By surrendering on all political fronts and cocooning themselves from the task of building mass movements for the sake of the people’s livelihood and against the unbridled loot and plunder by the comprador-crony corporate donors of the BJP, who are also drooling for opportunities in Jammu & Kashmir now under the garb of development, the opposition has given a freehand to the RSS-BJP to create narratives and centred its activities to fit in a positive role within that narrative. This has been the most disastrous thing for Indian politics and the so-called democracy, which is rendered opposition-less.

For a vibrant democratic culture, for enlightening, educating and awakening the people to counter the Hindutva fascist aggression, the coming of a people’s alternative opposition to the forefront of national struggle against Hindutva fascism and corporate loot and plunder has become an imperative task. Who will take the lead and shoulder this Herculean task? Who can reach the people and set new narratives, regarding the economy, regarding the question of livelihood, regarding the corporate loot and plunder? This is a big question in the current situation and those who will pioneer in this front will eventually become the commanding power in India’s volatile political battle. Once the Modi regime will lose the privilege of setting the dominant narrative and the marginalised voices will get a chance to reach out, the crumbling of the fascist empire will start. But, the first step towards it is still awaited.