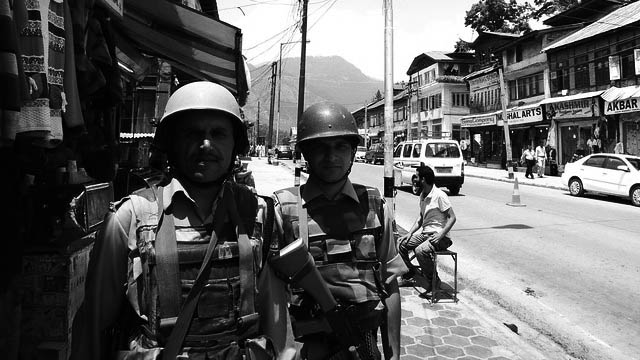 More than a month has passed that the people of Jammu & Kashmir, especially the Kashmiris, are incommunicado due to the communication blockade imposed by the Indian state on them since 4 August 2019. After imposing a communication blockade and virtually turning the valley into a garrison, with people locked in their houses, India bifurcated its part of Jammu & Kashmir into two union territories after abrogating Artice 370 and Article 35A of the Constitution that gave limited autonomy to Jammu & Kashmir and prevented outsiders from buying land in the state. Since the last week of July, the Indian state, under false pretexts, deployed a large number of troops in Jammu & Kashmir and created a fear psychosis, especially over a false alarm of terror threat, to clear the Kashmir valley of the Hindu pilgrims travelling to Amarnath shrine and the tourists on vacation. The valley was cleared overnight, concertina wires fenced the streets, guns aimed at each street and each door, while people were locked inside their houses, against their wish and their mobile, telephone, internet and cable television connections snapped.

The people of Jammu & Kashmir have been thrown in a dark abyss of isolation, to keep them disunited to prevent any sort of inconvenience to the Indian state when it was bifurcating the erstwhile princely state under its administration into two union territories. This ordeal is what’s continuing even today. More than a month, the people of Kashmir continue to suffer the tribulation while the international community refuse to take cognisance of the transgression because Indian Prime Minister Narendra Modi and his Bharatiya Janata Party (BJP), driven by reactionary Hindutva fascist ideology, promise them huge profiteering opportunities.

None of the big names of the Indian press could hold the government and Modi accountable for the Kashmir fiasco. Except for a few brave and committed journalists and alternative media entities, none in the mainstream dared to ask uncomfortable questions to the government on Kashmir. None asked the government to validate its assertion that the Kashmiri people are supportive of its decision and clear the ambiguity rising over contradictory reasons given by the governor, the BJP leaders, the National Security Advisor, etc, on why Kashmir continues under the lockdown even after a month. None asked why the government is creating hysteria over terrorists when it has deployed more than 700,000 soldiers for 150 existing militants and made Kashmir the most-militarized zone in the world? Rather, these media houses are working as the government’s PR agency and spreading utmost misinformation and jingoism under the garb of promoting “India’s interest” when India itself is violating the human rights of people it calls its own.

Even when none from the mainstream Indian press, except a few like The Telegraph, The Indian Express, Quint, The Wire, etc, showed the real picture of the ground realities in Kashmir, they didn’t remain aloof when they were asked to attack the foreign press and alternative coverage of Kashmir that showed the grotesque reality in the valley. Surprisingly, the western mainstream press like The New York Times, the BBC, Washington Post, Al-Jazeera, etc, brought the real picture of the Indian-occupied Kashmir’s situation through their path-breaking ground journalism, where local reporters braved the military to report the reality. When such news caught the attention of the world, with even US Presidential Election candidate Bernie Sanders, the UK Labour Party’s Jeremy Corbyn, etc, raising the concern of the Kashmiri people, then the toady media of the Modi regime and their eminence grises launched a concerted attack against these media houses and even quoted Noam Chomsky to question the credibilities of these media houses, forgetting Chomsky’s support to the cause of Kashmir’s independence at the first place.

Not only there is gloating over the macabre atrocities committed against a people incarcerated and left incommunicado in their homeland for being what they are — Kashmiri Muslims — there is also a call for punitive action against all those who raise the issue of the oppression. In the last 34 days, more than 5,000 Kashmiris, including schoolkids, have been arrested, locked and tortured. No international human rights watch organisation has got any access to the Kashmiris and it’s bolstering the spirit of the state to perpetrate more heinous crimes against humanity. When prominent pro-India Kashmiri activist Shah Faesal, a former bureaucrat-turned-politician, wanted to go outside India and raise the issue of human rights violations, then he was arrested and thrown behind the bars without trial. Three former chief ministers remain under house arrest. All prominent pro-India and pro-freedom politicians remain under house arrest. When Faesal’s colleague, former Jawaharlal Nehru University student leader-turned-politician Shehla Rashid raised the issue of Indian state atrocities against the Kashmiri people, including the children, the government swiftly promoted an online vitriol campaign against her and then filed an FIR against her by accusing her of sedition and the process is undergoing to arrest her for criticising the Indian state.

In this scenario, when mainstream India, after an ephemeral kerfuffle over Kashmir’s formal annexation through the abrogation of Article 370, Article 35A and its bifurcation, remains indifferent to the plight of the Kashmiri people, when it justifies violence against an oppressed and humiliated people, then it simply acts as the agent of colonisation and sides up with the oppressors. If there is no attempt taken to educate, arouse and organise the common Indian poor, who suffer the onslaught by the same Indian ruling classes who are motoring their juggernaut to pulverise Kashmiris, to build up a massive people’s struggle for the sake of the Kashmiri people’s democratic and human rights, the reign of Hindutva fascism under Modi’s leadership will be emboldened and it will get a leeway to carry out its obnoxious agenda without fearing any reprisal in other parts of India as well. The Modi regime must be told by the people that it cannot roller its juggernaut of oppression using the subterfuge of nationalism at each instance, and only the poor, the oppressed and exploited people of India can do that.

It’s true that the Kashmiri people have been fighting for their right to self-determination since the last seven decades and facing brutal state repression for being vocal about their rights. However, it’s also a fact that the Kashmiri people’s struggle, foremost for safeguarding their identity and seeking control of their own future, can’t happen in isolation. The Kashmiri people need the support of the Indian workers, peasants and poor people fighting for their own existence and to establish a democratic system where their interests will be served. Unless this people’s democratic struggle is strongly connected with the Kashmiri people’s struggle, unless the plight of the Kashmiri people isn’t realised by each worker, peasant and toiling people of India, the chances of Kashmiri people winning any remarkable victory against oppression and persecution are very thin. The unity of the people against their common enemies, their common oppressors, cutting across their identity, forms the key to success in politics. It’s the duty of the Indian workers, peasants and toiled people to support the struggle of the Kashmiri people and help them uncage themselves from the current pernicious situation.