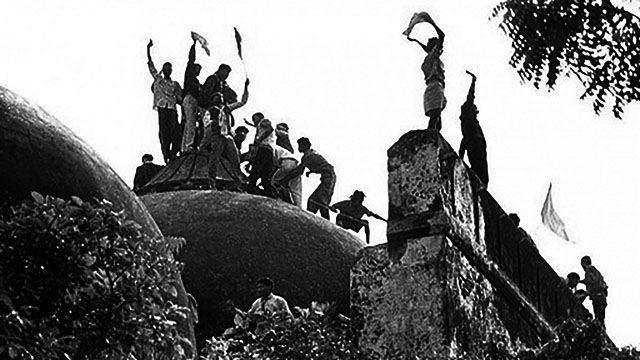 Finally, the Supreme Court of India delivered the much-awaited Ayodhya verdict on 9 November 2019. The verdict was unsurprisingly on the lines that the progressive, democratic and anti-fascist forces have predicted long before as it supported Prime Minister Narendra Modi and the ruling Bharatiya Janata Party (BJP) in their demand for a temple of Rama, the mythological Hindu king who is revered as a deity by the north and west Indian Hindus. As predicted, the Supreme Court’s Ayodhya verdict absolutely neglected the Muslim community’s demand for justice in a 27-year-long legal struggle to restore the 15th-century Babri Masjid (mosque) that was razed by a feral Hindutva fascist mob led by the Rashtriya Swayamsevak Sangh (RSS) — the parent body of the BJP — on 6 December 1992.

The Ayodhya verdict is the first verdict on any civil dispute that dragged for seven decades and killed thousands. The actual issue was created in the 1850s when the British colonial rulers, who got the right to rule the Oudh kingdom by sidelining its Nawab, used fables over the site to stir communal tension and divide the local people. The seeds of hatred sown by the colonial rulers germinated into a full-grown poisonous tree in 1992, when not only the RSS and the BJP managed to mobilise thousands of boisterous Hindutva-incensed thugs from all over India to demolish the Babri Masjid with utmost impunity, but also blow off the cover of secularism that the Indian state used to hide its sheer Brahminical, bigoted fascist character since its inception in 1947.

While the neo-liberal economic order, which India embraced in 1991, created the pre-conditions for the Hindutva fascist ecosystem to sustain, the rise of the BJP as a political party and the RSS’s omnipotence got a shot in the arm due to the Babri Masjid demolition and subsequent pan-India communal riots. When the BJP was reorganised in 1982 as a reincarnation of the erstwhile RSS-affiliate Bharatiya Jan Sangh, it could only win two seats in the Lok Sabha in 1984. The BJP now enjoys an absolute majority in not only Indian parliament but in most of the states where it even didn’t exist hitherto.

If one thing can be credited for the BJP’s meteoric rise and the mainstreaming of the Hindutva fascist camp, then it’s the Ram Janmabhoomi movement that the Vishwa Hindu Parishad (VHP) originally started in the mid-1980s. The BJP was able to utilise the VHP campaign to intensify the agitation and create a frenzy throughout the country using Islamophobia. However, if it wasn’t for the Indian state and the Congress party — which in its statement after the Ayodhya verdict said it always wanted a Rama temple in the disputed site — the BJP wouldn’t have managed to reach where it’s now and the total Hindutva-inclination of the Indian state, in a naked and unapologetic fashion, wouldn’t have been possible.

It was former prime minister Rajiv Gandhi, one of the icons in the Congress’s pantheon of Nehru-Gandhi dynasty, who opened the locks of the disputed Babri Masjid for Hindus to worship the deity there. The Congress-led government at the centre allowed the Hindutva fascists to carry out the demolition and even didn’t take any strong measure to arrest the riots that broke out in Mumbai and other parts of the country or cracked the whip on the RSS and its progeny as it would on anti-fascist leftwing forces. Now, when the Congress is in its death bed, living on the mercy of the BJP, it has no other option available but to resort to its version of Hindutva fascism to stay relevant in a communally polarised society.

In the present circumstances, where all institutions of the state are increasingly saffronised by the Modi regime, by placing the subservient ideological mascots of the RSS at their top posts or cajoling those perched at the pinnacle to show obeisance towards the sclerotic regime, there was less hope for the Muslims from the Ayodhya verdict. However, by resorting to a poor attempt of balancing, while mocking the Muslims for their existence and misfortune, the Supreme Court’s Ayodhya verdict showed that in Modified India, the Muslims must feel obliged because they are able to live, forget Constitution-guaranteed right to equality. In the era of Muslim disenfranchisement, concentration camps, total blockade, Islamophobic hysteria and utter disregard for the values of secularism, the Ayodhya verdict, that denied the Muslims their right to rebuild the Babri Masjid, truly epitomise what India under Modi stands for.