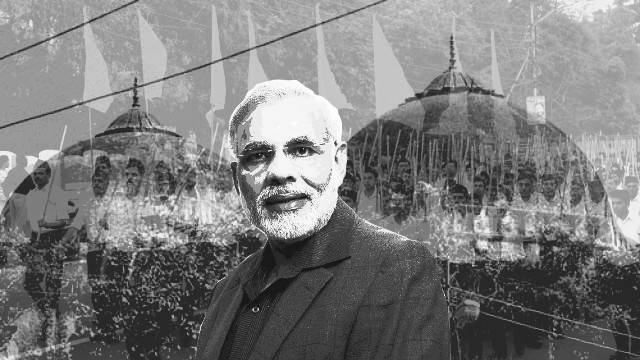 The Babri Masjid demolition by the bestial Hindutva thugs, instigated by the Rashtriya Swayamsevak Sangh (RSS), was one of the biggest acts of terrorism in the 20th century India. Not only was a mosque demolished following a vicious conspiracy hatched by the RSS and used by its parliamentary arm Bharatiya Janata Party (BJP) for political aggrandizement, India’s sham secular identity was also demolished on 6 December 1992. With the recent Ayodhya verdict, allowing the building of a Hindu temple for deity Rama on the disputed land where the Babri Masjid once stood, the Supreme Court sealed not only the fate of one of India’s long-pending and bloodiest civil dispute but also the fate of secularism.

Prime Minister Narendra Modi’s government has gained immense strength in the recent years after the Hindutva fascist juggernaut became invincible throughout India due to the rapid expansion and aggrandizement of the RSS and the BJP. If something can be single-handedly credited for this rapid augmentation of these utmost fascist organisations and the collapse of the so-called liberal democratic and secular state, then it will be the successful demolition of the Babri Masjid in 1992 by the Hindutva fascist camp.

While the Ayodhya verdict seriously rejected the Muslim community’s plea for justice and, despite acknowledging the Babri Masjid demolition as a criminal act, allowed the perpetrators to grab the land and have their say, the case against the masterminds didn’t progress much since the time Yogi Adityanath-led BJP government was formed in Uttar Pradesh, where the trial is on. Senior BJP leaders and the alleged masterminds of the demolition, Lal Krishna Advani, Uma Bharti, Vinay Katiyar, Murli Manohar Joshi, etc, are accused in the Babri Masjid demolition case and since the last 27 years, they remain aloof from the law for obvious reasons. It will be a utopian wish to expect the Indian judiciary punish them for the Babri Masjid demolition after the Supreme Court virtually endorsed it.

Today, at the most crucial juncture of Indian history, when every founding principle of the Indian state is discarded with sheer hubris by the Modi regime, then the question that one must ask is whether it’s only the RSS and the BJP that can be blamed for the Babri Masjid demolition on 6 December 1992? Was the Hindutva fascist camp working in isolation when it started the notorious Ram Janmabhoomi movement in the 1980s? Was it possible for the Hindutva fascists to single-handedly demolish the Babri Masjid in 1992?

More than the BJP, it was the Congress party that aggravated the situation and aided the evil Hindutva fascist Ram Janmabhoomi movement. Without the Congress party’s government under Rajiv Gandhi, the Babri Masjid issue wouldn’t have survived. Gandhi’s regime opened the gates of the Babri Masjid to the Hindutva camp, allowing them to rally feral supporters. PV Narasimha Rao’s government remained a mute spectator when the RSS-led Hindutva fascists gathered en masse in Ayodhya and Babri Masjid was demolished. At present, when the Supreme Court’s verdict came, it was the Congress party that welcomed the gross injustice to the Muslim community and claimed that it always favoured a Ram temple at the location, albeit, not as aggressively as the BJP.

Other political parties, that allied and supported Vishwanath Pratap Singh’s National Front government in the late 1980s, including the parliamentary left, can also be called parties to the conspiracy, as most of them allied with and helped the BJP earn legitimacy in the parliamentary arena. The Hindutva fascist camp sucked the blood and life out of these so-called secular and democratic parties and made them appendages of its own obnoxious agenda.

At present, when these parties, including the Congress party, show their cosmetic opposition to the BJP’s agenda and Modi’s rule, then one must show them the mirror and dig out their past to show how they strengthened and legitimised Hindutva fascism. Modi’s rise isn’t merely a sudden rise of an autocrat but a rich yield from the seeds sown by the RSS a long time ago and watered by the Congress party and the so-called secular and democratic parties for years. Each year when these parties condemn the Babri Masjid demolition on 6 December 1992, the secular, democratic and progressive forces must unmask them as well, while vigorously raising the demand for the reconstruction of the Babri Masjid in the disputed land to undo the injustice done to the Muslims. Let 6 December 1992 be the eye-opener, to identify the real friends and foes of secularism.