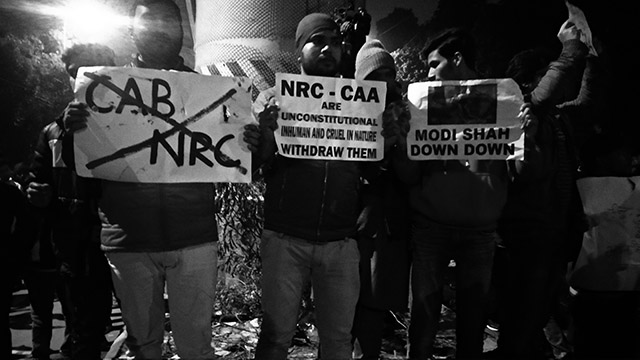 The massive rallies all over India against the Citizenship (Amendment) Act, 2019 — CAA — and the National Register of Citizens (NRC) panicked Prime Minister Narendra Modi’s regime and his Bharatiya Janata Party (BJP). While the BJP managed, with the support of its parental body Rashtriya Swayamsevak Sangh (RSS) to instigate violence in the states directly ruled by it like Gujarat and Uttar Pradesh, the major rallies in Delhi, Kolkata and Mumbai remained largely peaceful and got thumping support from people of all walks of life, including a section of the middle class and elites, who are otherwise hostile to the idea of an inclusive India and diversity in society. The bigot Modi regime, which wants to disenfranchise a large number of poor people — especially the Muslims and ostracised Dalits — understood that it can’t directly attack the people but have to divert their attention through some heinous conspiracies.

The people’s enthusiastic participation, their ability to organise and lead others, and many other unprecedented incidents and stories that the participants experienced make these rallies really unique in the history of India. The last time a large number of common people came out for a mass movement was when a corporate-sponsored scab Anna Hazare — a pawn of the ruling BJP — sat on a sham hunger strike at Delhi’s Ram Lila ground. Though Hazare’s movement was a media-hyped, corporate-funded and carefully-managed one, the rallies and protests that took place on 19 December 2019, in Ahmedabad, Bengaluru, Chandigarh, Chennai, Delhi, Kolkata, Lucknow, Mangalore and Mumbai, were largely spontaneous and weren’t centrally managed. These rallies were faceless, leaderless, and sycophancy-less movements, which is causing immense trouble to the BJP as it can’t badmouth anyone or pick someone specifically for lambasting. Even the large number of celebrities, who are joining this movement, aren’t hijacking it and therefore this remains genuinely a people’s movement.

The large cavalcades of people on the streets, from all religions, genders, castes and age group, their solidarity and their joint opposition against the RSS-BJP’s heinous scheme to divide the people, show how unpopular the Modi regime has become. Quite desperately the BJP leadership, the Modi regime and the RSS stalwarts are brainstorming over the paths through which they can seek rescue at this point in time. As options, they are delving over a military skirmish at the border or the Line of Control LoC with Pakistan, terrorist incidents that can trigger xenophobic waves, and, of course, the RSS’s speciality of inciting communal pogrom targeting Muslims in some parts of the country after inflicting damage to Hindus at the beginning. These possibilities make it imperative for those in the people’s movements against CAA and NRC to show utmost vigil and create awareness not only among those who are attending the rallies but also among those who are not. History must be referred to in order to understand how the RSS-BJP can spin situations and create extreme polarisation in society.

Economically, India is on a downward trajectory as industries are suffering, unemployment is rising and the government is selling the public sector assets to the big corporate houses at a throw-away price in lieu huge donations to the RSS-BJP. Rather than increasing the disposable income of the poor to help generate demand for goods and services, the Modi regime is constantly snatching whatever little the people have in their hands. In this way, India is turned into not only a hotspot of social unrest but also economic unrest. The major attack of the CAA and the NRC will be on the poor of the country, the people with the least documentation, who neither have employment today nor have the ability to sustain in a highly polarised and discriminatory society. It’s, therefore, imperative to understand the class character of the actual struggle against the government and ensure that the working class, the peasantry and the toiled people join the struggle.

We must remember that mere student and citizen movements didn’t bring an end to Indira Gandhi’s tyrannical regime or other such regimes. Rather, it was the working class’s movements and massive strikes that struck at the root of the economic source of the governments that ended the tyrannical rule. Mrs Gandhi’s emergency didn’t survive, the tyrannical undeclared emergency of Modi will also not survive. What is needed is a focused approach and efforts to expand the movement by expanding the reach of the movement and bringing forth the classes that can resiliently carry it forward towards its ultimate victory.